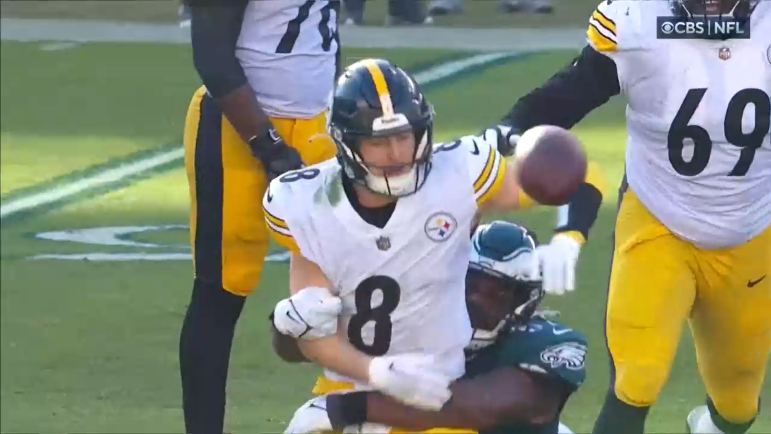 Buckle up. Breaking down the whopping six sacks the Pittsburgh Steelers allowed in last Sunday’s loss to the Philadelphia Eagles.

Empty set initially with Warren motioned back into the backfield after being aligned wide given the aggressive and blitz look here. Pre-snap identification is key with the Eagles overloaded front and #7, Hasson Reddick, aligned inside shade of the left tackle.

And the Eagles run a stunt with Reddick looping inside. The overload side slant inside with Reddick looping from B gap to B gap. This is a tough stunt but isn’t handled well by the Steelers. Kevin Dotson and OC Mason Cole need to quickly pass off the 1T slanting away from the loop side. Essentially, Cole has to pass off to Dotson and RG James Daniels has to pass off to Cole. But this has to be effortlessly and quickly and it doesn’t happen. The Cole/Dotson pass isn’t quite quick enough.

This isn’t on Daniels though because he can’t take the looper until the crashes is taken by the adjacent player, in this case Cole. Reddick loops in free and has a straight line to Kenny Pickett. LT Dan Moore also loses the edge and Pickett is absolutely crushed. At least his legs came out underneath him to avoid any sort of knee injury. But if that’s a positive here, it tells you how bad things were.

Hard to blame one guy here. This one is a mess. The only player who did anything right was RT Chukwuma Okorafor. The Eagles also have a great scheme, kudos to them, and it’s why you don’t want to be behind the chains against that front and defense.

I do think Dotson was a bit slow in working to the crasher as Reddick got his eyes inside. And he’s the guy who has to start the whole “pick up/pass off” cycle. I’ll put half on him and half on the Eagles for a scheme that’s tough to stop.

Blame: Half on Kevin Dotson, Half on Defensive Scheme

Here, it’s blocked well with a good “bowl shaped” pocket OL Coach Pat Meyer talks about. RT Chukwuma Okorafor does lose the edge here which Pickett feels and causes him to step up and try to run. Harder for the line to block and the DT cleans it up. Nothing available downfield so I’ll put half on coverage and half on Okorafor. 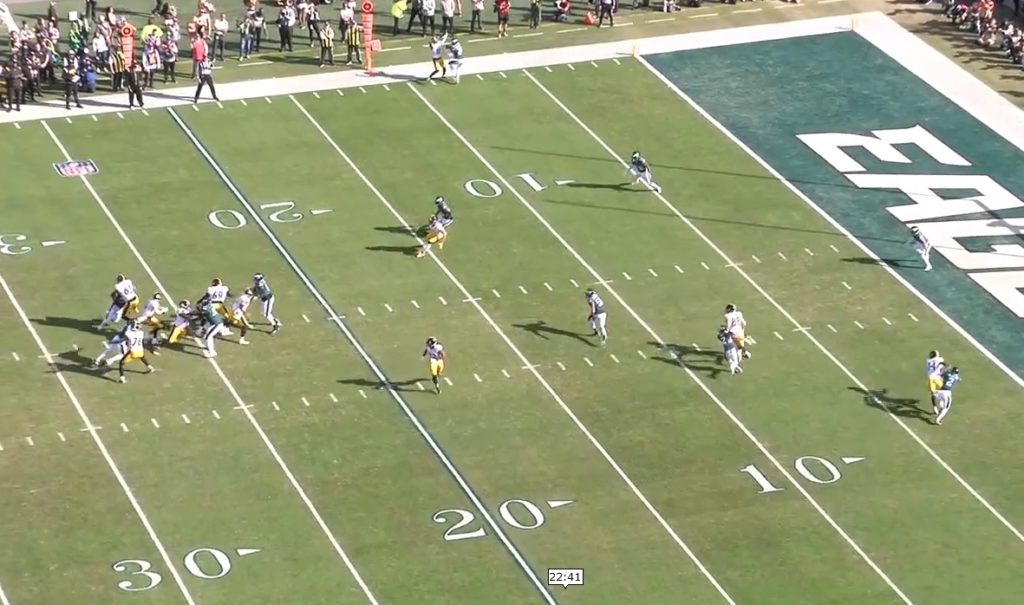 Blame: Half on OT Chukwuma Okorafor, half on coverage

Another game the Eagles are running on the right side. LT Dan Moore Jr. and LG Kevin Dotson have to pick up the looper – former Steeler Javon Hargrave – but fail to, leading to the sack. It looks like Hargrave gets crafty and is grabbing Dotson’s jersey to hold him. Moore isn’t providing much help here to help close that gap either and Pickett is taken down on final time of the first half.

Pittsburgh’s really struggled to pick up these games in recent weeks. They can be tough and again, playing from behind makes it harder. Dotson “loses” the rep but he should’ve had help here and I can’t penalize him for clearly being held. I’m putting this on Moore.

Two culprits here. RT Chukwuma Okorafor, who had his worst pass blocking day in a long time a week ago, and LG Kevin Dotson. Dotson has an “on-body” set with the DT over him and steps inside off the snap. He shouldn’t. He should be going slightly forward but not cheating inside with the center sliding away and him being 1v1. He doesn’t generate first significant contact, his hands too high, and Hargrave rips through him.

On the outside, Reddick again rips through Okorafor’s punch attempt, causing Pickett to step up and run to his right. He gets away but Hargrave closes and punches the ball out, leading to a fumble recovered by the Eagles. Pickett’s forced to make his second tackle in as many weeks.

Blame: Half on Kevin Dotson, half on Chukwuma Okorafor

This one is very much a teaching moment for Kenny Pickett. Sack is 100% on him. 3rd and 5 so it’s not 3rd and forever where you need a ton of time to push the ball downfield. Eagles have pre-snap confusion. But they begin to sort themselves out. The NCB is tight, right off TE Connor Heyward and in a clear blitzing posture. The safeties are confused and the Steelers have two receivers to the top with one corner covering, begging and trying to tell a safety to rotate over and replace the blitzing nickel corner. 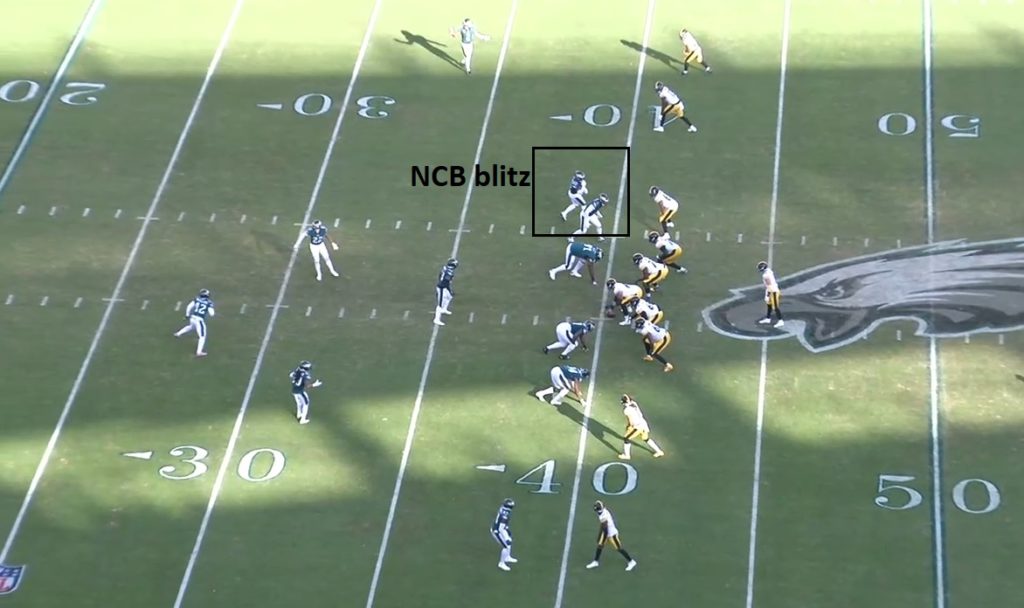 Really, Pickett should’ve jumped on the confusion and gotten the ball snapped to take advantage of numbers being in Pittsburgh’s favor.

But Pickett never reads it and isn’t looking hot. The corner comes in unblocked, the Steelers are empty and there’s no one to pick him up. He comes in free to sack Pickett. Had Pickett read it, Boykin was open underneath running a hot route against the blitz. 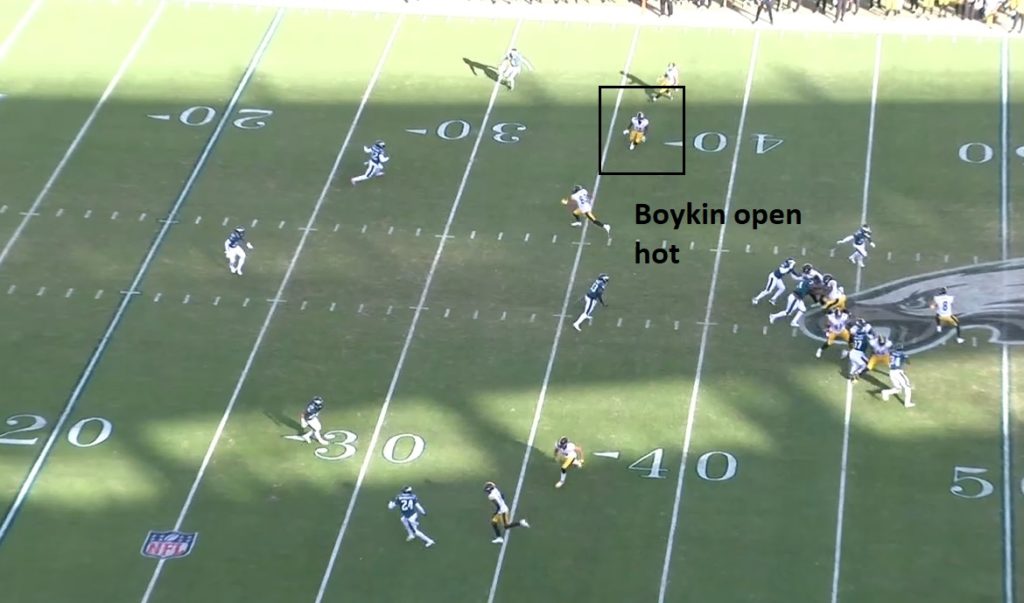 Now, I know some believe in throwing away from the blitz vs throwing into it, there’s a debate to be had, but Pickett has to see the threat and adjust pre-snap. It was painfully obvious and this leads to an ugly outcome.

Finally, nothing open downfield for Pickett. Levels concept that doesn’t stress anyone while WR Diontae Johnson slips at the top of his comeback route. Moore gets walked back on the RDE’s bull rush while Kevin Dotson loses his block to the inside. It would’ve been nice for RG James Daniels to keep looking for work here. 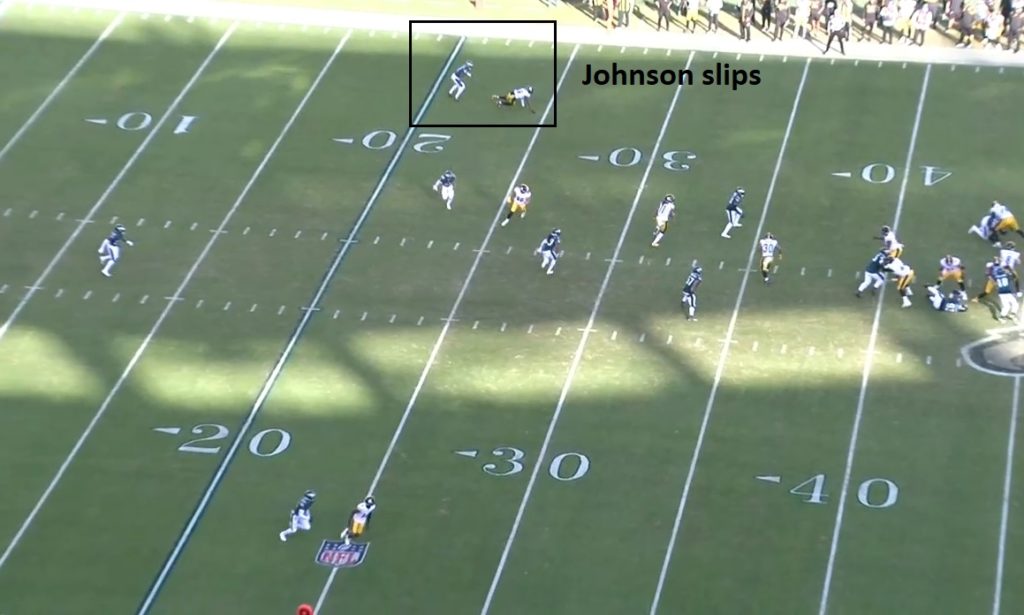 Good coverage here, the line held up pretty long, so it’s hard to blame the front five. I’ll put this down as a coverage sack.