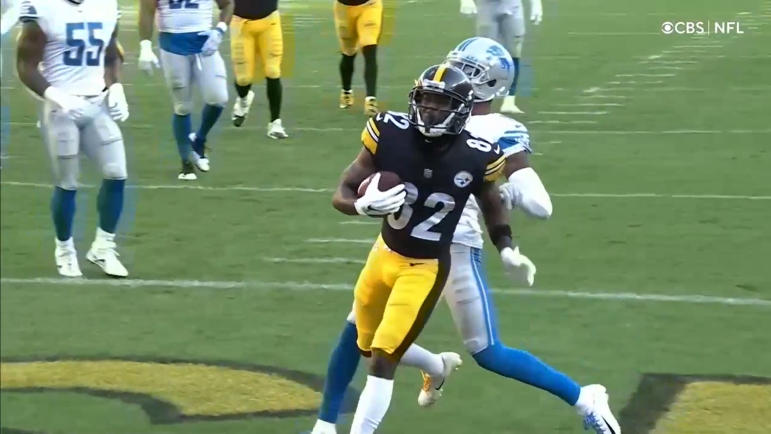 With wide receiver Chase Claypool being shipped off to the Chicago Bears at the NFL Trade Deadline, Pittsburgh Steelers wide receiver Steven Sims will have an opportunity to fill Claypool’s shoes and pick up some reps in the slot. Sims has just two catches for -1 yards this year, with both catches coming in the team’s Week 8 loss against the Philadelphia Eagles. Sims has experience as a slot receiver dating back to his days in Washington, as he had 34 catches for 310 yards along with four touchdowns in his rookie season in 2019, and he tallied another 27 catches his second year in the league. Sims talked about what element he can bring in the slot to help out the team’s outside receivers, specifically fourth-year wideout Diontae Johnson.

“Run after catch. That’s gonnna help open more things up for everybody on the outside. Not saying nobody else couldn’t have done it, but that’s just something that I specialize in. Hopefully it opens up for me and [Diontae] to get run after catch and get him more open touches,” Sims said via Steelers Live on Twitter.

Steven Sims spoke to the media about continuing to make explosive plays, his journey to the NFL, and more. pic.twitter.com/EdQ2SMyK18

Run after the catch has been one of Pittsburgh’s biggest problems this season. Johnson ranked fifth in the league in yards after the catch last season, but he’s nowhere near that high this season, as he ranks 136th in the NFL with just 83 so far this season. That number is tied with Steelers backup tight end Zach Gentry. And that isn’t a knock on Johnson, who was also recently named the NFL’s most open receiver. He just hasn’t been properly utilized.

Pittsburgh hasn’t done a good enough job targeting the middle of the field and getting players in space, and a lot of that has to do with a limited number of in-breaking routes toward the middle of the field. As a smaller receiver with speed, Sims is hopefully a guy who can make plays in that area and use his speed and elusiveness to create after the catch. If that starts working, hopefully, the Steelers decide to utilize more routes and plays that help Johnson break plays off after the catch, as it’s one of his biggest strengths yet is not at all being utilized this year.

It’ll be an interesting dynamic with Sims in the slot. The Steelers tried to go with a big slot in Claypool, but it just wasn’t a fit for his strengths and Pittsbugh was able to get a second-round pick in return. Despite Claypool being more physically gifted, I wouldn’t be surprised if Sims was able to make a more consistent impact in the slot. Obviously, he can provide yards after the catch, that will be huge as it’s one of many missing elements. from the Steelers offense right now. Frankly, the offense can’t get much worse, and I’m excited to see how Sims is able to contribute in a bigger role.