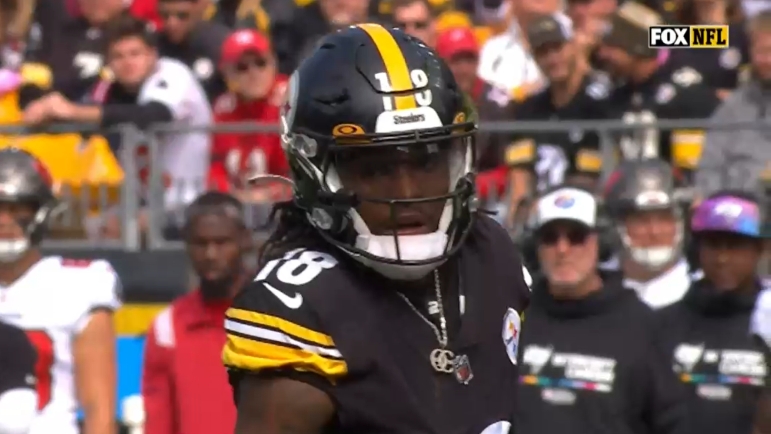 It’s pretty much a general consensus among Steelers fans that wide receiver Diontae Johnson has been pretty underwhelming in 2022. He has 43 receptions, but for just 372 yards and has yet to score a touchdown this season. While Johnson hasn’t been as productive as hoped for, he has been the most open receiver in the NFL this year, according to ESPN Analytics and posted on FiveThirtyEight.

According to ESPN, open rate is measured by the likelihood a receiver would make a catch if thrown to.

“For every route run, Open Score assesses the likelihood a receiver would be able to complete a catch, conditional on if he were targeted. The assessment takes place a moment before pass release (0.2 seconds prior), because defenders read the shoulders of the quarterback at release and break on the targeted receiver.”

Johnson has an open rate of 90, which is tied with Seattle Seahawks wide receiver Tyler Lockett for the highest in the league. His other metrics don’t measure as highly, as his catch rate is just 54, which ranks 41st in the league, while his yards after catch rate of 35 is 83rd in the NFL. Averaging all those numbers, Johnson grades out to an overall rate of 70, which is tied with Amari Cooper for the 13th best in the NFL.

So what does this tell us? Johnson is great at getting open, but it might be in instances where his route isn’t early in the progression, and even when he does get the ball thrown his way, he’s struggled a little bit with drops this season. I think Johnson’s talent is higher than his production level this season, but the drops and the occasional lapses in route-running (Pickett’s two interceptions at the end of the Dolphins game were on throws to Johnson where he probably could’ve run better routes).

With Claypool gone and an easier schedule in the second half of the year, maybe the passing offense can take off a little bit more and get more productive. If that doesn’t happen though, the Steelers will probably continue to have the worst offense in football.