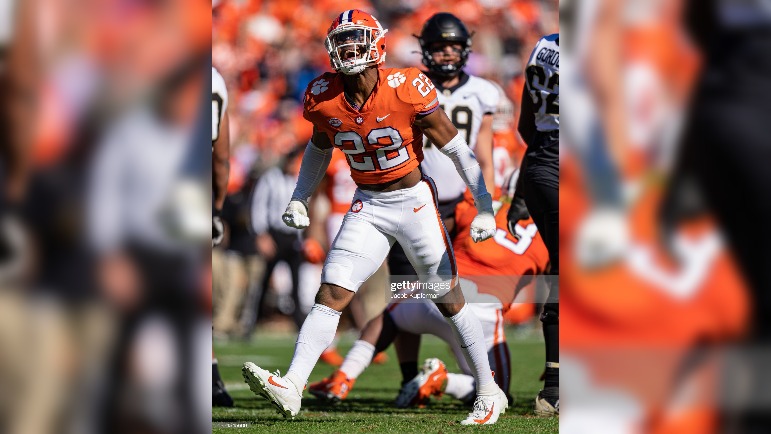 The Clemson Tigers rolled the Miami Hurricanes Saturday afternoon by a score of 40-10, holding the Hurricanes to just 98 yards of total offense. Part of the reason behind the standout defensive performance by Clemson was LB #22 Trenton Simpson’s efforts in this game. Simpson played his best game of the season against Miami as he recorded two tackles, two TFLs, two sacks, and a QB hurry. Simpson flashed his impressive speed and explosiveness at the LB position, showing great pursuit of the ballcarrier against the run as well as a pass rusher. Simpson is widely regarded as one of the top ILB prospects in this draft class and this performance Saturday only helps his case to be ILB1 off the board this spring.

LB1 Trenton Simpson with a sack and forced fumble 🐅 ⭐️

98 yards of offense for Miami 💀pic.twitter.com/hZyKC9drwZ

The Hawkeyes defeated the Golden Gophers on the road Saturday afternoon in a classic Big Ten slugfest, edging out Minnesota 13-10. The Hawkeye defense once again held strong keeping Minnesota out of the end zone for most of the game, and LB #31 Jack Campbell led the way. Campbell was highlighted prior to Saturday’s contest as a player to watch, and the 6’5, 246lb senior did not disappoint. Campbell recorded ten total tackles and an interception in this contest, picking off QB Athan Kaliakmanis in the final minutes of the game to put Iowa into scoring position to kick the game-winning field goal.

Campbell doesn’t have the same athletic upside as Simpson, but he is a sound, talented defender in his own right and should be one of the first ILBs drafted come April.

The Pick-6️⃣ was taken off the board (stepped out of bounds), but it's still an INT.

The Demon Deacons won a shootout with the Syracuse Orange on Saturday, edging out their ACC opponent 45-35. The offense was once again humming for Wake Forest and WR #9 A.T. Perry made his presence felt. The 6’5, 205lb redshirt junior reeled in ten receptions for 119 yards and three TDs, being practically unguardable for the Cuse defense. Perry used his height, length, and body control to win contested catch situations against DBs in coverage, showing off his hands and spatial awareness to bring in catches in the red zone for three scores in the first half alone. Perry may not possess blazing long speed or sudden quickness, but he has good rolling speed down the field as a deep threat and is a jump ball savant.

That's 3⃣ TD's for A.T. Perry just in the first half 😎@WakeFB | #ACCFootball

Speaking of shootouts, the USC Trojans won the Battle of LA Saturday night in a barn burner against UCLA 48-45. QB Caleb Williams went over 500 total yards in the game, but WR #3 Jordan Addison showed the nation why scouts look to him as the #1 WR prospect in this draft class. Addison caught 11 passes for 178 yards and a TD against the Bruins, shining on the big stage after a leg injury suffered against Utah kept him out for nearly a month.

Addison looked to be back to full health last night, easily generating separation from coverage and showed of his run-after-catch ability to gash the secondary for big plays. He may not win the Biletnikoff award for the second-straight season, but Addison looks to be on-track to be WR1 in this draft class should he remain healthy and test well this spring.

The South Carolina Gamecocks went nuclear at home and stomped the fifth-ranked Tennessee Volunteers by a score of 63-38. Points were going up in bunches in this one and QB #7 Spencer Rattler had himself a performance for the ages. The former Oklahoma castoff put together his best statical output of his college career against the Volunteers, completing 30-of-37 pass attempts for 438 yards and six passing TDs while chipping in another five carries for 16 yards on the ground. Rattler had struggled for most of the season in terms of consistency, but he put it all together in this one, shredding the opposing defense with touch, accuracy, and impressive arm talent as he nearly threw as many TDs as INTs.

Rattler has been heavily criticized for his brash personality at times as well as the lack of NFL size (6’1, 215lb), but his arm talent has never been in-question. He can sling it all over the yard and can make nearly every throw in the book. Being only a junior, it may be best for Rattler to stay another year to continue to develop his game for the next level. Should he declare, however, he could be an interesting mid-to-late round selection that can be a developmental QB that a team can groom for a year or two thanks to his NFL traits as a passer.