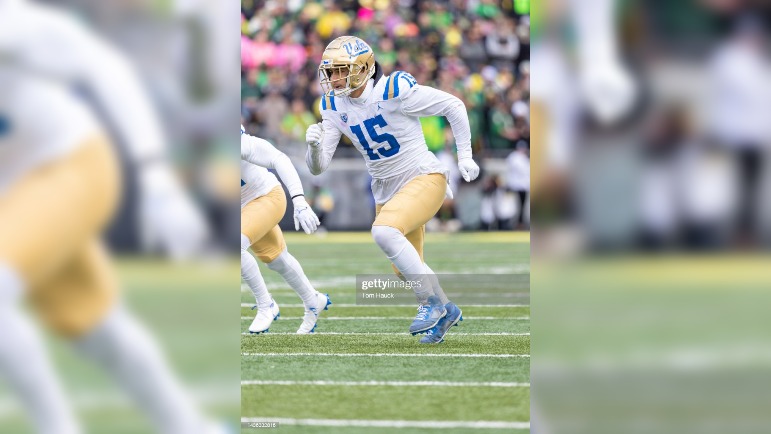 The Fighting Illini go into the Big House Saturday morning as they attempt to knock off the third-ranked Wolverines.

The Illini have several notable draft prospects to watch on Saturday with CB #31 Devon Witherspoon being one of the hottest names in all of college football. The 6’1, 180lb junior has made an impact this season with an INT and 12 PBUs. Thus far in 2022, Witherspoon has seen 34 targets in man coverage and has only allowed seven receptions and no TDs, accounting for a 27.3 passer rating when targeted according to Pro Football Focus. Already accepting a Senior bowl invite, Witherspoon is one of the prospects that has most boosted his draft stock this season and will look to keep that trend going against Michigan on Saturday.

WHAT A HIT FROM DEVON WITHERSPOON 😳

The Wolverines won the Joe Moore Award last season and if they were to win again, they would be the first program to win it in back-to-back years. One of the members of the Michigan OL that has led to the unit’s success over the years is OT #76 Ryan Hayes. The 6’7, 305lb redshirt senior has appeared in 36 games in his career with 26 starts at left tackle.

Hayes is a large man that generates a big push upfront in the running game, leading to the success of the Michigan rushing attack propelling RB Blake Corum into the Heisman conversation. A good athlete in his own right, Hayes projects to be a capable starting tackle at the next level or a high-end backup that should be able to contribute quickly.

Michigan running what looks like a version of the Dart concept with LT Ryan Hayes pulling.

Not sure I've seen this much from Michigan during the Harbaugh years. But Hayes (and the current RTs) is really athletic. pic.twitter.com/lWLWQdEklE

The Buckeyes look to defend their #2 ranking in college football on the road Saturday afternoon against the Maryland Terrapins.

The Buckeyes are led by LB #35 Tommy Eichenberg on defense. The 6’2, 239lb senior is the field general for the Ohio State defense, having nearly 100 total tackles on the season (92) along with 2.5 sacks, two PBUs, and an INT returned for a TD against the Iowa Hawkeyes a few weeks ago. While not the most dynamic athlete in terms of speed or quickness, Eichenberg is a cerebral defender that quickly diagnoses the play and flows to the football. He is a solid run defender that also does a great job occupying zones in coverage. He will be asked to keep a lid on the Maryland offense who will try and keep up with the Buckeyes’ dynamic offense Saturday afternoon.

Tommy Eichenberg shot out of a cannon. Big TFL pic.twitter.com/lt3gkCHEHI

Maryland is off to a respectable 6-4 start this season, thanks in-part to the play of their offensive line and OT #71 Jaelyn Duncan. Duncan stood out to me personally early on in the scouting process due to the fact that he looks the part of a NFL franchise LT, standing 6’6, 320lb as a senior and has had his play match the measurables so far this season. He has done a good job keeping the QB clean in the pocket while also getting out in space in the running game, pulling from the tackle spot and picking up linebackers and defensive backs in the screen game.

Duncan plays with good mirror and footwork but needs to finish the season strong to make his case as potentially OT1 in the draft class.

The Iowa Hawkeyes go across the border into Minnesota to square off with the Golden Gophers in a Big Ten Conference clash.

The Hawkeyes boast one of the stingiest defenses in college football led by the captain himself LB #31 Jack Campbell. Campbell makes plays all over the field as a downhill run stuffer as well as a capable zone coverage defender. He isn’t the most dynamic athlete in terms of burst or twitch, but the 6’5, 243lb senior has the size, tenacity, and instincts you want in an off-ball linebacker that can play in the middle of an NFL defense for years to come. He will be asked to lead the defense yet again and hold the Gopher running game at bey while making a play or two in coverage to try and turn the tide in the Hawkeyes’ favor in this one.

The Gophers do most of their damage on offense on the ground with C #60 John Michael Schmitz leading the way upfront for Minnesota. The 6’4, 320lb senior is probably the best center prospect in the country, possessing the experience, size, strength, and technique to finish blocks at a high level. He is one of the best run blockers in college football, being able to drive his competition off the LOS as well as get out in space. While not a freak athlete, Schmitz can mirror well in pass protection, having a good base and anchor against the pass rush. Schmitz should likely be a Day Two lock come the spring but could vault himself into Round 1 with a strong finish to the season.

I wanted to post some tape of Minnesota Center John Michael Schmitz, but his play was so consistent across the whole game I watched that there kinda weren't any standout plays. Very reliable player. pic.twitter.com/wrfdw2UZO1

The battle of Los Angeles kicks off Saturday night in a showdown of two top 20 clubs with the Trojans and the Bruins doing battle at the Rose Bowl.

USC OL #72 Andrew Vorhees has established himself as one of the most steady, reliable OL in college football. The 6’6, 325lb redshirt is sound in pass protection while also having the athleticism and mobility to pull and get out in space to pick up blocks in the run game. 44 games on the offensive line in his career, with 25 starts at right guard, 8 starts at left guard and 4 starts at left tackle. He has now logged six starts this season at LG, showing NFL scouts the versatility he can play multiple positions at the next level. While an older prospect as a 6th-year senior, Vorhees is as polished as they come and figures to be plug-and-play the day he is drafted.

The Bruins are enjoying a resurgent season in 2022 thanks to the play of QB #1 Dorian Thompson-Robison on offense as well as the breakout of OLB #15 Laiatu Latu. Latu was forced to quit his football career after a neck injury that ended his career in Seattle with the Huskies in 2019. However, he was medically cleared and entered the transfer portal and ended up in Southern California playing for the Bruins. Latu’s resurgence is on-par with fellow former Bruin and Hurricane and current Miami Dolphins pass rusher Jaelan Phillips who was also forced to medically retire before being cleared and had a great 2020 season that got him drafted in the first round.

Forced to medically retire after 2 seasons at Washington, where he became a coach, he transferred to UCLA and is having a dominant season.

Latu has posted eight sacks and three forced fumbles so far this season and has the size, length, and athleticism (6’4, 265lb) you look for in an NFL-caliber pass rusher. Should he close out the season strong and show scouts he is 100% healthy, Latu could skyrocket up the draft boards should he choose to declare early.

The Utes travel to Eugene to battle the Ducks in Pac 12 action late Saturday night with both team jostling for the top spot in the conference.

The Utes boast a talented, well-coached roster which features CB #1 Clark Phillips. The 5’10, 183lb cover man is only a redshirt sophomore, but he has quickly become one of the country’s most feared defenders in the secondary. He showed promise last season but has taken his game to another level to the tune of five INTs, two of which he has returned for two scores. Philips is a good enough athlete to run with most receivers in coverage stride for stride and possesses the aggressiveness, ball skills, and instincts to be a ballhawk who makes splash plays. This weekend Philips will face a tough test facing Bo Nix and a dynamic Oregon passing attack that the Utes will have to keep in check.

For the Ducks, most watching the game will be looking for LB #1 Noah Sewell on the defensive side of the football. Sewell is a rocked up off-ball LB prospect, standing at 6’2, 253lb and plays as an old school, downhill thumper against the run. He is a good athlete in his own right, having the speed and pursuit to chase down ballcarriers, but can struggle at times moving laterally or when tasked with coverage.

He will have to do his best playing both downhill against the run as well as in space against QB Cam Rising and the rest of the Utah offense as he looks to prove to scouts that he is capable of playing an east/west style in NFL football and attempt to boost his stock into Round 1 consideration.