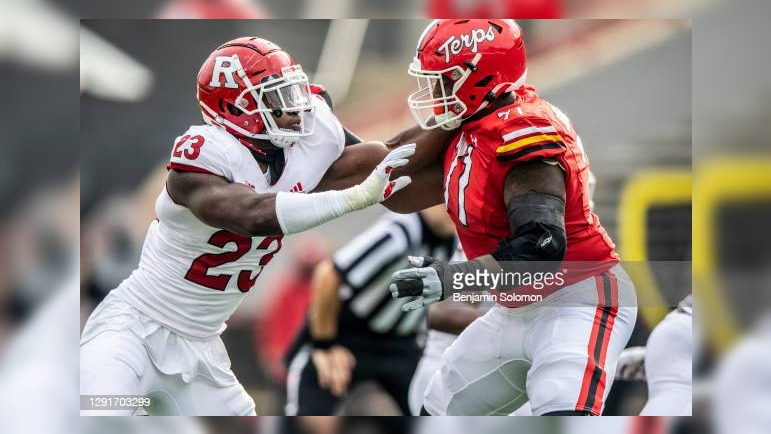 The Maryland Terrapins defeated the Buffalo Bulls 31-10 at home Saturday afternoon, taking the team to 1-0 on the season. The Terrapin offense rushed for 149 yards on the day with the offensive line controlling the LOS against their opponent from the MAC conference. While many college football fans may have had their eyes on Taulia Tagovailoa, Tua’s younger brother, those watching from a scouting perspective had their eyes on Maryland LT #71 Jaelyn Duncan.

Duncan has been recognized as one of the better tackle prospects in the 2023 draft class, being ranked by some draftniks as OT1 for the upcoming spring. Duncan brings the pedigree to the table being a former four-star recruit that stayed in-state to attend Maryland and has started 27 games at LT prior to 2022. Standing at 6’6, 330lb, Duncan passes the eye test as prototypical tackle build at the pro level, having long arms and a well-built lower half to hold his own against power rushers and displace defenders in the running game.

When you dive into the tape, you notice right away how sound Duncan is as a pass protector. His pass set is well-developed, having a strong kick step to set the depth of the pocket with active feet and hands at the ready to punch pass rushers coming off the edge. Watch this rep where Duncan has a clean pass set on third down, staying in-phase with the pass rusher who tries to spin back inside as Duncan seals him off, playing with active feet and hands to take the defender completely out of the play.

Here is another rep on third down where Duncan shows an active kick step out of his stance, sealing off the edge to the pass rusher who runs straight into Duncan’s grasp. The pass rusher tries to fight off the block, but Duncan keeps his hands inside the defender’s chest and mirrors with his feet, keeping him from getting into the pocket while the rest of the protection breaks down and Tagovailoa goes down for the sack.

Duncan’s lower half is extremely strong, having the hip and knee bend to anchor in against the rush and stand up pass rushers in their tracks. We see that here on this pass set where Duncan steps inside and picks up the DT, having a wide base and inside hands to give little-to-no ground as Tagovailoa completes the pass for the first down.

Because he is so large and long, many edge rushers will try and go wide around Duncan. However, he will use that strategy to his advantage like we see on this called draw play where the edge rusher flies up field and Duncan punches his inside shoulder, putting the defender on the ground and finishes on top of him for good measure on the pancake block as the back takes the draw all the way to the house.

Still, while Duncan is a physical specimen at the tackle position and has all the tools to become a starting LT in the league, there were several instances that stuck out against Buffalo that he needs to clean up. Occasionally Duncan doesn’t get a body on a man either in pass protection or as a run blocker. Whether it be a lack of awareness or simply Duncan being disinterested, there are a couple of examples where he misses a clear block like this play where Duncan starts to climb to the second level on the inside run, but doesn’t pick up either defender that he approaches, thus letting the guy he should have got make a tackle attempt. The runner breaks the tackle, but should Duncan make that block, the back would have had a better chance to score.

Here is another example in pass protection where Duncan is looking to help the tackle-eligible man to his left but fails to recognize and pick up the blitzing linebacker coming up the middle. The defender blows past Duncan and lays a big stick on the QB, smashing Tagovailoa into the turf.

Duncan usually plays with great technique as a pass protector, but he can get antsy on his quicks set, leading to him dropping his head and occasionally whiffing on blocks. You can see that happen here on this quick screen pass to the right as Duncan lunges forward and the defender falls off the block attempt. Luckily, it doesn’t matter as the ball is out quick, but it is something to note going forward when Duncan plays better competition.

Overall, it was a solid showing for Duncan who was supposed to dominate the lower-level competition, and for the most part succeeded in that effort. He did show some concerns in overall awareness as well as nastiness which needs to be turned up for a player of his talent and skill set. Still, Duncan has all the tools you want to see in a tackle prospect, possessing that large, long frame along with the footwork and active hands to keep pass rushers at bey.

Duncan is squarely in the mix to be the top OT draft come next spring but will need to show more consistency against strong competition to make his case to NFL scouting departments. Personally, I will be looking to see how Duncan fares September 24 against Michigan and down the stretch against Wisconsin, Penn State, and Ohio State as he will face NFL-caliber pass rushers in those contests.