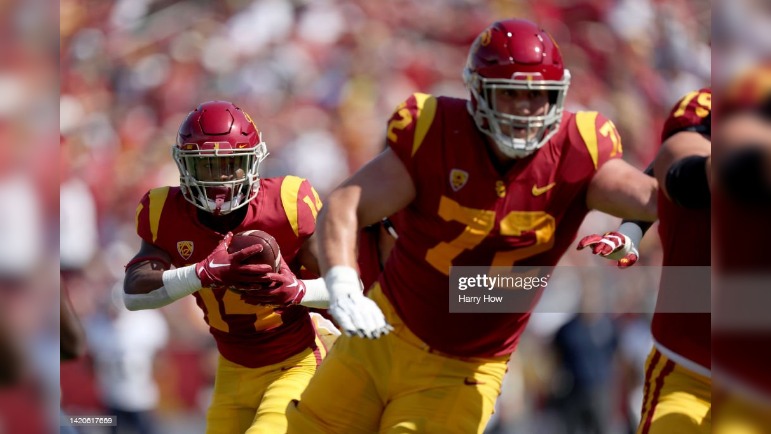 The USC Trojans took care of business Saturday evening in Southern California, defeating the Washington State Cougars 30-14. After getting over a slot start, the offense really picked up for SC as QB Caleb Williams threw for two TDs and the running game dominated the Cougar defense to the tune of 181 yards including a 149-yard effort by RB Travis Dye.

While watching through this game the first time, I intended to break down USC DL Tuli Tuipulotu who put together a three-sack game in the contest. However, awhile watching both sides of the football, my attention shifted to LG #72 Andrew Vorhees who continually stood out both in the run game and in pass protection. The 6’6, 325lb redshirt senior had been touted as one of the better OL prospects in the draft class prior to the 2022 season, but this performance had me seeing Vorhees representing himself well at the next level when he gets to play on Sundays.

When watching Vorhees, there are a few things that stick out. First, he is technically sound in terms of his punch as well as his footwork and anchor. He does a great job punching with arms extended and sitting into his hips with solid knee bend to keep defenders at bey. Watch this quick set Vorhees gets on the DL on third-and-long, immediately getting hands on the defender’s chest on the snap and plays with hips back and little-to-no forward lean to anchor in an neutralize the rush as Williams scrambles to his right to find an open receiver for the score.

Vorhees is also very aware in pass protection in terms of picking up twists and stunts upfront. Here at the end of the game with USC in the red zone, we see Vorhees take the DT and pass him off to the LT as he picks up the twisting DE coming around, latching onto his chest to subdue the rush. Williams has the time to pass but throws the ball high as the intended target can’t come down with the catch.

Vorhees may not appear to be the most explosive athlete for an offensive lineman, but he is more than capable of working in space. Watch this run play where Vorhees pulls from the LG spot and kicks out the blitzer flying up the field, nearly putting him into the ground as #13 Caleb Williams takes the option keeper off the left side then turns up field for a nice gain on first down.

Vorhees does a good job of working body angles to create natural seals in the running game, allowing backs to run off his backside or Williams to scramble with open grass out in front. Here on fourth-and-one, we watch Vorhees down block the DT with the LT on a double team, tossing the defender to the ground as Dye easily picks up the first down and picks up some extra yards after breaking a few more tackles.

Just a few plays later, USC pushes it in for the TD on a carry by Travis Dye as Vorhees takes the defender and turns his shoulders away from the hole, creating a gap that Dye shoots through for the score.

While down blocks are normally considered one of the easer blocks for an OL to make since they have leverage on the defender, reach blocks bring more difficulty into the equation as the blocker must show the movement skills to cut off the defender to a specific location and successfully turn his shoulders away to allow the runner to get the corner. That is exactly what Vorhees does here on this run that gets called back due to a penalty by a fellow OL. Vorhees reaches the 1-technique who is slanting down the LOS, sealing him off just long enough for Dye to shoot through the gap into the second level where he evades a couple tackles for the score.

At the end of the game with USC nursing a lead, the Trojan offense turned to Dye to run out the clock. Vorhees made serval impact blocks down the stretch to spring Dye into open space like on this first clip where Vorhees pulls from left to right to kick out the DE as Dye breaks loose into the second level or the second clip where he turns the defender to the outside, keeping him from penetrating into the backfield as Dye takes the ball into the Cougar secondary for first down yardage.

When scouting OL, we always want to see a pancake pop up on the film. While the play didn’t count due to an incomplete pass, Vorhees got his stack of pancakes Saturday night on this play in the fourth quarter where he drives off the ball on the RPO, down blocking the DL and plants him on his back within one yard of the LOS as Williams drops back to pass and overthrows his intended target.

Overall, it was a strong performance for Andrew Vorhees who I had been impressed with watching pieces of games prior to the matchup with Washington State but came away impressed with what he put on tape. He showed great technique in terms of his hand placement and footwork and was able to execute down blocks, reach blocks, pulls, and pickup twists/stunts. While not a phenomenal athlete possessing incredible speed or strength, Vorhees was more than adequate out in space and when singled up with defenders across from him on the LOS. He used his body extremely well to work positioning in order to create running lanes that the offense utilized throughout the contest.

Prior to 2022, appeared in 44 games on the offensive line in his career, with 25 starts at right guard, 8 starts at left guard and 4 starts at left tackle. He has now logged six starts this season at LG, showing NFL scouts the versatility he can play multiple positions at the next level. While a likely better fit at guard than tackle at the next level due to athletic limitations as well as the fact that he will be a 24-year-old rookie, Vorhees is about as polished as they come in terms of OL transitioning from college to the pros. He should be able to earn a starting job inside relatively quickly and kick outside if needed if injuries pop up.

Likely a late Day One or Day Two option, Vorhees has a high floor and would be a solid double for any team looking to hit on OL early in the draft with a guy that may not have much more room for growth  but is about as steady and ready to contribute as you will find along the offensive line in this draft class.