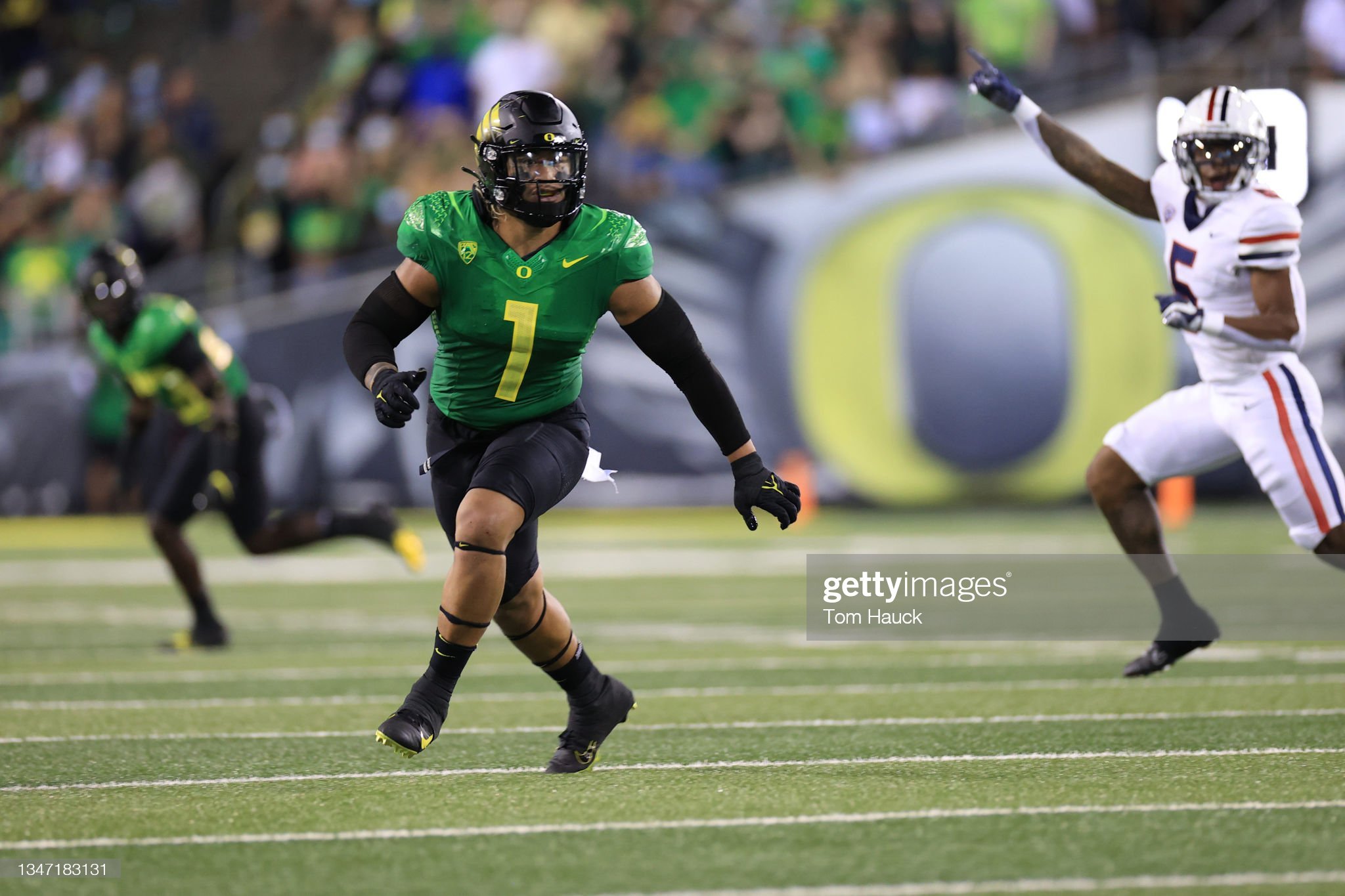 — Has great size and length for the position with a stout, filled-out frame
— Has lined up as a traditional linebacker in the box, split out over the slot, and on the edge as a pass rusher
— Possesses good play speed and explosiveness
— Plays with great effort in all aspects of the game
— Shows phenomenal pursuit of the football as a sideline-to-sideline defender
— Takes good angles to the football to cut off outside runs, closing ground quickly
— Flies into the backfield on blitzes and when asked to rush the passer
— Strong at the point of attack and can stack and shed consistently
— Will overpower TEs against the run and holds his own against OL as a run defender
— Can push the pocket with a bull rush as well as use his speed to win around the corner on the edge
— Adequate zone dropper that reads the QB’s eyes and can cover intermediate zones
— Will have his instincts take him to the ball, leading to deflections of INTs
— Has a real knack for getting his hands up in passing lanes

— Isn’t the quickest when asked to move laterally or change directions
— Can move well for his size, but lacks fluidity to cover RBs and TEs in man coverage
— Will leave his feet and arm tackle at times, allowing runners a chance to break free
— Likes to tackle high and try and swing ballcarriers down rather than running through on contact
— Can have eyes locked into the backfield for too long, watching the QB rather than moving to cover the receiver in his zone

— Junior Prospect from Malaeimi, American Samoa
— Brother of Lions OT Penei Sewell, Saints LB Nephi Sewell, and Nevada LB Gabriel Sewell
— Five-star prospect by Rivals and 247Sports
— Consensus No. 1 player in Utah and top-3 inside linebacker in the nation by ESPN, Rivals and 247Sports
— Named “Mr. Football” for Utah, playing LB and RB at Orem HS
— As a senior, led Orem High School to the Utah 5A State Championship
— Enrolled in January of 2020 with the Oregon Football team
— Saw action in all seven games during a pandemic-shortened season in 2020 and recorded 48 total tackles (28 solo), 6.5 TFLs, two sacks, and a forced fumble
— Played and started in 14 games in 2021 where he racked up 114 stops (53 solo), 8.5 TFLs, four sacks, two forced fumbles, five PBUs, and one INT
— Pac-12 All-Conference first team (2021), Pac-12 Freshman Defensive Player of the Year (2020), The Athletic Freshman All-America first team (2020)

Noah Sewell comes from a family where football represents a major part of the dynamic. His brothers Penei and Nephi both entered the league the last two years with Penei being a first-round pick with the Detroit Lions and Nephi signing with the New Orleans Saints as a UDFA. His other brother, Gabriel, currently plays at Nevada, speaking to the bloodline the Sewell family comes from.

Noah is a physically gifted and talented linebacker from Oregon who captured the national stage as a recruit, ranking as the #1 overall player from the state of Utah and as a top three linebacker in his recruiting class. He chose Oregon over a host of other offers and saw playing time immediately as a freshman stater racking up Freshman All-American honors in 2020 before becoming a First Team All-PAC 12 pick in 2021.

When you watch Sewell on tape, you see a big, fast, and explosive player at the position. The dude plays like his hair is on fire every snap as is evident by the way he plays chase in pursuit. Watch this rep against Ohio State where Sewell shows off his sideline-to-sideline speed in pursuit of #7 C.J. Stroud who keeps the ball and tries to scramble on the rollout, getting sticked by Sewell at the LOS for no gain.

Here is another example against Utah where you see Sewell’s acceleration and speed in pursuit of the QB on the keep, running him down in the backfield and swings him down out of bounds for a loss of yardage.

Standing at 6’3, 251lb, Sewell as a well-built specimen at linebacker that combines speed and explosiveness with brute strength and power. He does a good job stacking and shedding blocks to make plays in the run game, whether it be with finesse or with power. Here we see the former as he swims over the shoulder of the LG coming to block him and chops down the runner at the line for no gain on the play.

On this play, we see Sewell win more with strength and good positioning as he keeps his shoulders square to the LOS on the run, getting a good piece of the TE coming up to block him on the combo block, getting arms extended and has the TE fall down due to the OL falling into his legs, allowing Sewell to play off the block and wrap up the ballcarrier and hog tie him down to the turf.

Sewell can win with strength at the point of attack not only as a run defender, but also as a pass rusher as well. Here against Cal, we see Sewell rush the passer from the second level, getting into the chest of the LT and proceeds to walk him back into the lap of the QB, disengaging the block to wrap up the QB by the shoulders for the sack.

Sewell has proven to be a capable pass rusher from various alignments of the defensive formation. Pro Football Focus awarded Sewell with an 89.7 pass-rushing grade last season, a stellar mark for an off-ball linebacker. Still, Sewell has shown the versatility to line up on the edge as well and get after the QB like we see here against Fresno State, dipping under the LT as he gets the corner and puts the heat on the passer, forcing a throw off his back foot that sails incomplete.

Sewell’s speed makes him a great spy of the QB when asked to clamp down on mobile passers from leaving the pocket. Here we see Sewell used in that facet against Utah, quickly closing the ground between he and the Utes QB, taking him down as he tries to leave the pocket.

His ability to spy the QB also leads too him picking up a fair number of tipped passes at the LOS thanks to his reactiveness once the ball is thrown like on this PBU against the Huskies.

When asked to play in zone coverage, Sewell can effectively make his drops and will read the QB’s eyes having a feel for breaking on the pass once thrown to contest it at the catch point. This leads to PBUs against backs and TEs in his zone as well as the chance at an INT that Sewell capitalizes on in this play against the Utes in the PAC-12 Championship game, undercutting the route by the slot receiver on the slant pattern and picks it off.

Still, Sewell’s instincts in coverage still need some work as he tends to lock his eyes in the backfield, being unaware at times of receivers getting open in his zone around him like on this play where the TE spots up just to the side of Sewell for the easy completion and walk-in TD. However, the play is saved as the QB overthrows the TE, having the pass fall incomplete.

Sewell also has bad tendencies of tackling high as seen above as well as leaving his feet and arm tackling rather than running through the ballcarrier on contact. He also lacks ideal change of direction skills and fluidity in lateral movements as most big-bodied off-ball linebackers struggle with. Watch this run against Utah where Sewell gets spun around as the receiver stutter steps, causing him to overrun the play and give up additional yardage.

Overall, Noah Sewell is a “first off the bus” kind of guy at the ILB position, having great size, strength, and speed that you want in a downhill thumper. He can effectively work off and around blocks as a run defender and brings some upside as a pass rusher. He also is capable of being an effective QB spy and making zone drops in the flats or in the intermediate quadrants of the field. Still, his fluidity as an athlete needs to be worked on this season for him to be considered a well-rounded prospect at the position as well as cleaning up some of his tackle attempts and ability to stay sticky in man coverage.

When watching Sewell, a name that immediately stuck out to me as a pro comparison was Leighton Vander Esch who too was a physical specimen coming out of Boise State, standing 6’4, 256lb with impressive speed and explosiveness as a sideline-to-sideline defender at the second level. Vander Esch also has flashed pass rush upside during his time in the NFL while also having a knack for deflecting passes while serving as a downhill run defender.

I see Sewell having a similar role in the league as a compliment to a smaller, more agile linebacker next to him. For the Pittsburgh Steelers who have recently declined Devin Bush’s fifth-year option and may not re-sign him next offseason, Sewell would slot in well next to Myles Jack as the BUCK in Pittsburgh’s defense, being that downhill enforcer against the run the team badly needs while also being able to stretch plays out to the sideline as well. Sewell should be one of the first names at the LB position called next spring, and a strong 2022 season could vault him into top 15 consideration on Day One of the 2023 NFL Draft.