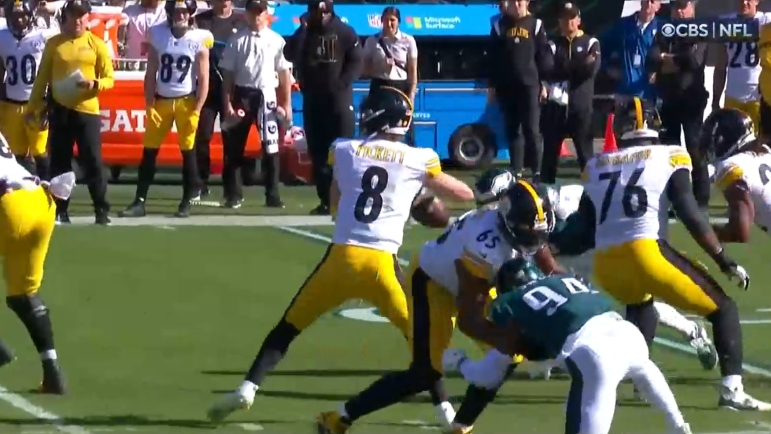 The Week 9 bye week was a perfect opportunity for the Pittsburgh Steelers to take a step back, reset and recharge offensively, especially for rookie quarterback Kenny Pickett.

After entering the lineup at halftime of the Week 4 loss to the New York Jets, Pickett has appeared overwhelmed in the Steelers’ woeful offense under second-year coordinator Matt Canada. He’s appeared unsure of himself, doesn’t trust his arm as much and is making far too many mistakes.

None of that is overly surprising as he’s a rookie quarterback learning through trial and error. Still, the off week was a good opportunity for the first-round quarterback to take a step back, reset and prepare for the stretch run of the 2022 season for the black and gold.

That stretch run will need to show signs for improvement from not only Pickett, but the rest of the Steelers offense moving forward. The offense focused on correcting little details like pre-snap penalties and understanding assignments fully. Though changes were made and the Steelers offense was able to reset over the bye week, the offense cannot press and try to correct all the mistakes in one week, Pickett stated to reporters Wednesday, according to video via Steelers.com.

Another area for Kenny Pickett to work on. Learning you can't get away with last-second changes. Times where you just have to roll w/ the call.

“Like I’ve mentioned before, you can’t press as a player, as coaches, all of us,” Pickett said to reporters Wednesday, according to video via Steelers.com. “We just gotta trust that everyone’s doing their job. We’re gonna go out there and execute and improve the little detailed things that we want to improve on and kind of just, you know, take it one step at a time. It all starts on Sunday.

“The things that we’re putting in and everything we’re working on, we gotta execute at a high level on Sunday.”

Talk is cheap when it comes to the Steelers this season. For weeks, the team has talked about correcting issues that have plagued them over and over and over again. Each and every week, the same issues pop up.

The bye week afforded them the chance to really hone in on those mistakes without preparing for an opponent, so hopefully they are corrected. That said, as Pickett points out, the players and coaches cannot press right away and try to do too much. Doing so could lead to more mistakes, putting the Steelers in a further hole on the season.

It comes down to execution, something the Steelers have not done at a passable level this season on the offensive side of the football. Sunday’s performance against the Saints at Acrisure Stadium will go a long way towards showing if the issues offensively are correctable or something the Steelers will have to deal with the rest of the season.