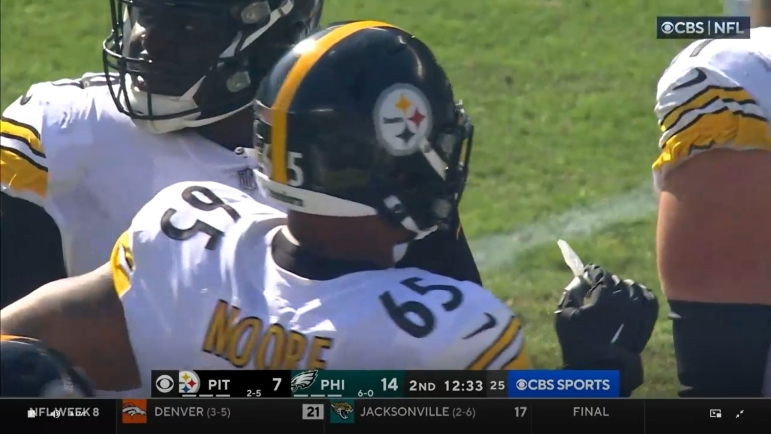 Coming into the 2022 season, much of the attention up front in the trenches on the offensive side of the football was focused on the left side of the offensive line in the Steel City for the Pittsburgh Steelers.

That left side of the line, featuring second-year left tackle and third-year left guard Kevin Dotson, had an up and down 2021 season. Moore Jr. was forced into the starting lineup a week before the start of the 2021 season due to injury and had to learn left tackle in the NFL on the fly, while Dotson dealt with injuries and was in and out of the lineup.

Add in the fact that a new offensive line coach in Pat Meyer was taking over for Adrian Klemm, who left for Oregon, while also teaching new techniques and principals, it was going to be important to see progress and get a better feel for the offensive line in general.

Through eight weeks, Meyer — who came over from the Carolina Panthers — stated that he’s seen a huge improvement in Moore Jr.’s game to this point in their tenure together.

“I think just studying it and seeing Dan, from watching him like from last year and comparing it, and even when I got here and from  training camp, I think it’s a night and day difference,” Meyer stated to reporters Tuesday, according to video via Steelers.com. “He obviously plays one of the harder positions in the sport of football playing that left tackle and being on that open end. I think his ceiling’s high. I think he’s going to progress, get better each and every week. Just the tempo of his feet, his sets, the way he’s thrown his hands now, which he never did before in the past. I think he’s improved.

“Does he have more room to improve? Heck yeah, he does. He’s a young kid. He’s a second year guy. Playing a position like that, he has to improve and he’s working at it,” Meyer added. “So yes, he will improve, but I’ve seen a huge, huge improvement from Dan over the course of whatever you wanna call it, 6, 7, 8 months.”

Of course, a coach is going to protect his player publicly. You’re never going to hear a position coach ruffle feathers and speak harshly against a player. It’s all sunshine and rainbows publicly to the media.

That said, Moore Jr. has been a weak link on the offensive line to this point, and his play appears to be regressing slightly this season, especially in recent weeks.

According to Pro Football Focus, Moore Jr.’s overall season grade of 55.1 is worse than his rookie season grade of 57.8. That can be directly tied to his decline in run blocking, sporting a 50.5 run block grade, compared to the 53.8 he had last season. Pass blocking has seen improvements from PFF, where Moore Jr. is at a 62.8 grade overall as a pass blocker, up from 58.9 last season.

Against Philadelphia in Week 8, Moore allowed a season-high nine pressures while also being called for a penalty in the blowout 35-13 loss.

He’s starting to struggle mightily, and it’s rather concerning.

Granted, he’s gone against some high-level pass rushers in the last two weeks in Miami’s Melvin Ingram and Jaelen Phillips, and Philadelphia’s Brandon Graham, Josh Sweat, Robert Quinn and more. But the second-year player is seeing a sharp decline in play in recent weeks, along with a significant uptick in penalties, and is starting to become the true weak link of an offensive line that has been under fire all season long.

Steelers Depot’s own Jonathan Heitritter broke down Moore Jr.’s film against the Eagles, and unsurprisingly it was an up and down performance, ripe with plenty of concerning clips in pass protection. He is still having issues with his footwork overall, even if his hand usage has gotten better in his pass sets under Meyer.

Add in the fact that he’s struggling to identify stunts and twists up front and struggles to pass them off or receive them, and it’s become a real concern in the trenches for a Steelers franchise that was hoping Moore Jr. could take a significant step forward in his second season. He still has time to right the ship and start stacking strong performances, but it’s not trending in the right direction currently for the second-year offensive lineman.