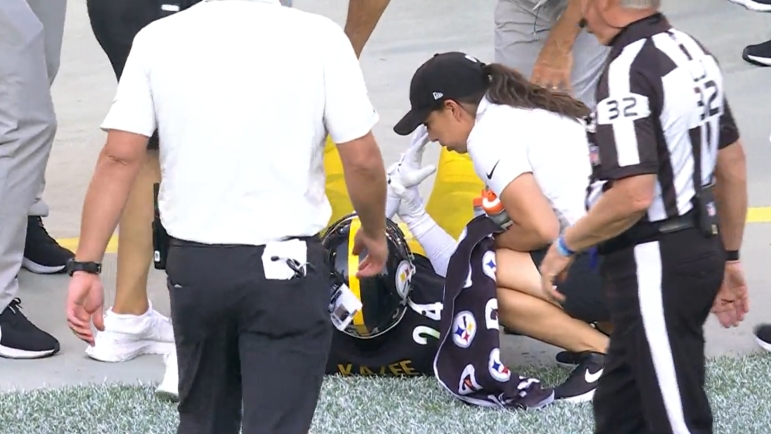 It hasn’t been an easy couple of years for Damontae Kazee. A torn Achilles in 2020, during a pandemic no less. The long and grueling rehab and recovery and trying to come back in 2021, perhaps still not fully 100% from the injury. Like most major leg injuries, they take two years to fully come back from. Signed by the Pittsburgh Steelers this offseason, Kazee got off to a hot summer start, flashing in camp and in-line for serious playing them.

Then, another injury. Kazee broke his forearm in the preseason finale against the Detroit Lions, sending him to injured reserve for the first half of the season. While Kazee is back and expected to play in Week 10 against the New Orleans Saints, he admits there have been some dark days the past two months.

“It was frustrating,” he said Monday via the team’s YouTube channel. “Dealing with injury two years ago when I tore of my Achilles and trying to rehab, doing that stuff last year. Getting on the team then broke my arm in the beginning of this preseason. So it was a downside. It got a little dark mode.”

Kazee tore his Achilles in October of 2020 while a member of the Atlanta Falcons, ending his season. He followed Dan Quinn to Dallas and started 15 games in 2021 though his play wasn’t well-received by Cowboys’ fans and the team moved on in the offseason.

Signed by the Steelers hours after the 2022 NFL Draft wrapped up, Kazee ran as first-team free safety for the first week of camp while Minkah Fitzpatrick sat on NFI after injuring his wrist during an offseason vacation. Kazee gained valuable reps and played well, showcasing his hit power and ability to make plays on the football while also lining up all over the secondary. Pittsburgh toyed with three-safety packages during the summer and likely would’ve used them in Week One had Kazee been healthy. But he broke his arm in the preseason finale versus the Lions and has had to work his way back ever since. He credits a supportive family for getting him through those tough days.

“I got my kids that put a smile on my face at the end of the day.”

The harsh reality is players can be forgotten about when they land on IR, especially newly signed ones like Kazee. They’re not always at practice or meetings, instead going through their rehab and treatment, and they become names and faces who fade into the background. The good news is his injury wasn’t season-ending and he’ll see the field this weekend against the New Orleans Saints.

Still just 29, he should have some role in this defense, though it’ll likely be limited and specialized the rest of the way. But his and, of course, T.J. Watt’s anticipated return will boost a Steelers’ team that needs all hands on deck to climb out of their 2-6 hole.