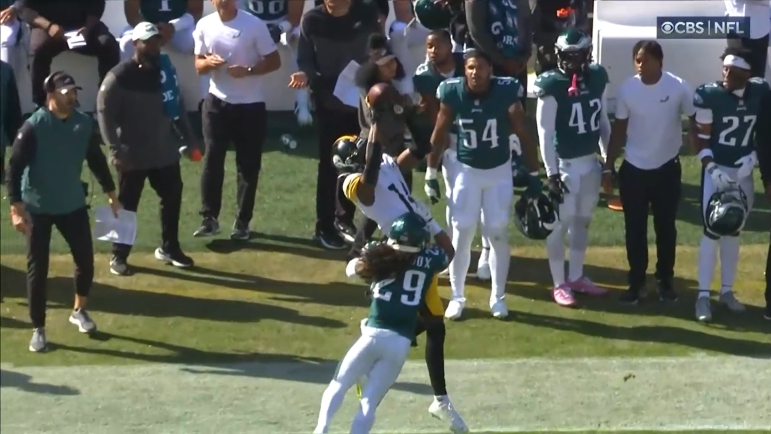 The Pittsburgh Steelers set their price on WR Chase Claypool prior to the trade deadline, and the Chicago Bears were willing to meet that price, sending a second-round pick to Pittsburgh in-exchange for the third year wideout. The return for Pittsburgh was a value they simply couldn’t turn down after seeing Claypool’s production and on-field impact drop from a promising rookie season when he scored 13 total TDs including the playoffs.

Now, Pittsburgh gets to hit the reset button with an asset that may surpass the initial investment of the 49th overall selection in the 2020 NFL Draft. Still, the Steelers will have to overcome Claypool’s loss on the field as Claypool was second on the team in targets and fourth in receiving yards.

One player that figures to see his usage expand more now that Claypool is out of town is none other than rookie WR George Pickens. It was recognized by many, including former Steelers safety Ryan Clark, that Pickens has surpassed Claypool in terms of impact on the football field, receiving seven less targets than Claypool so far in 2022, but converted those 43 targets to 26 receptions for 338 yards (13.0 YPR) and a TD in eight games played. These aren’t gaudy stats by any means but considering that the entire offense has been struggling to find any sort of identity, the flashes Pickens has provided in a small sample size has been encouraging to say the least.

There was a lot of chatter on the #Steelers potentially trading Chase Claypool leading into today, as this move was authorized weeks ago & the internal impression is that Claypool felt he's a #1 talent while the #Steelers feel ready to give rookie George Pickens an expanded role.

Pickens stole the show when he first stepped foot in Latrobe for training camp, making a spectacular catch on the daily while also winning multiple contested catch situations down the field, something that Claypool has struggled to do consistently when combative catches was supposed to be one of the strengths to his game. Pickens took that playmaking ability with him into the regular season, making the most of his opportunities as he slowly become more integrated into the offense after making the catch of the year Week 3 in Cleveland, seeing a minimum of six targets in every game outside of last week’s blowout in Philadelphia.

Pickens has had roughly a 14.5% target share to start his rookie campaign but should see his snaps more consistently above the 80% threshold now that Claypool is in Chicago. While WR Steven Sims figures to get some run in the slot along with Gunner Olszewski and Miles Boykin likely getting more run, the likes of Pickens, Diontae Johnson, and Pat Freiermuth all figure to pull some targets from what Claypool has vacated with his departure. A 17% target share isn’t huge, but dispersing those targets amongst the other options in the passing game could lead to Pickens get over that 20% mark.

Given the limitations of this offense, we shouldn’t expect a second half surge like Odell Beckham Jr. and Justin Jefferson had in their rookie seasons for Pickens. However, it’s not out of the realm of possibility that Pickens can finish with 60-70 receptions for 800-900 yards and catch a few more TDs as well should QB Kenny Pickett improve in the second half of the season. Regardless, it’s clear that George Pickens is the future at the WR position in Pittsburgh, and the departure of Claypool only further emphasizes the trust and intrigue the coaching staff and front office have in their young star receiver.

What are your thoughts on WR George Pickens? Do you think we will see a strong second half of the season from him with Claypool gone? What is a realistic expectation for Pickens in terms of end-of-season stats? Please leave your thoughts in the comments section below and thanks again for reading!