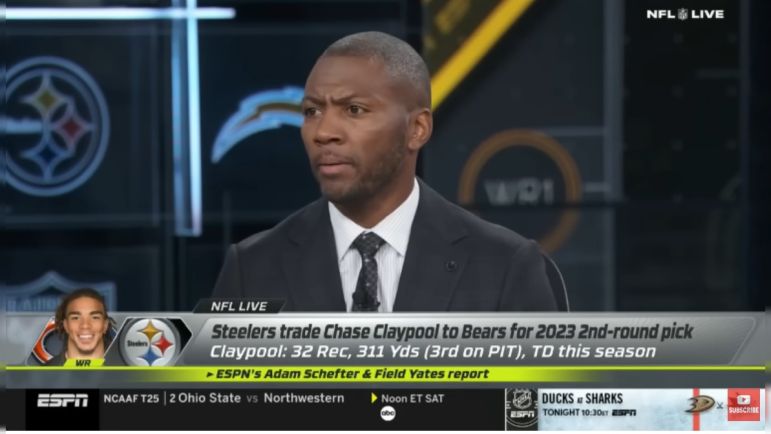 The Pittsburgh Steelers made two rare midseason trades on the NFL’s trade deadline Tuesday. The more prominent trade involved receiver Chase Claypool, traded to the Chicago Bears for their second round pick. Former Steelers’ safety Ryan Clark, who played alongside Hall of Famer Troy Polamalu for many years, commented on the trade on Wednesday.

“The first thing is that George Pickens is the best wide receiver on the football team,” Clark said regarding the Steelers’ trading away of Claypool on NFL Live.”No one should be shocked by that, five star that goes to Georgia. Georgia doesn’t necessarily use him the way he’s supposed to, he has some off the field stuff and he gets injured. George Pickens is the guy going forward on that team and he seems like he’s Kenny Pickett’s guy and now Chase Claypool.”

If one player served as an impetus for the Steelers’ decision to trade Claypool it is indeed George Pickens. After picking Pickens in the second round out of Georgia, Claypool’s fit with the team was fundamentally awkward. That is, the team’s high investment in Pickens made him the de facto Z receiver, moving Claypool to the slot. While bigger slots have had success stories, that wasn’t the case with Claypool.

As great of a prospect as Pickens was in the draft, some aspects of his game are a work in progress. That is, his route running and separation can use some work, and ESPN’s FiveThirtyEight measures him as one of the NFL’s least open receivers with a rating of 37. There is still time for Pickens to prove the Steelers’ investment and trust in him, and it is not uncommon for rookie receivers to take time before finding their footing.

Calling Pickens the best receiver on the team may be a stretch, especially given that Diontae Johnson leads the team in targets by a significant margin and was recently re-signed by the team. However, there is a point to be made that the team believes in his potential to be the top receiver on the team.

So far, 16 of Pickens’ 44 targets have come with over 20 air yards, which is the second highest in the NFL according to Pro Football Focus. This is similar to Claypool’s role as a rookie, as 29.1% of his targets came with over 20 air yards, which ranked 6th in the NFL. It made no sense to have two receivers who are best utilized in the vertical Z receiver position, and the Steelers realized that.

“You’ve seen the production drop from some of the things we saw early on in his [Claypool’s] career,” Clark continued. “The Pittsburgh Steelers realized this team isn’t winning the Super Bowl. This team isn’t making the playoffs, and now that you can stack some draft capital for a guy that you could probably do without because of the way you play football.”

Indeed, Claypool steadily declined after a promising rookie season. Virtually all of Claypool’s receiving statistics dropped after his rookie season, and the return of the 3-5 Bears’ second round pick was too much to pass up on despite Claypool’s physical talent.

While the Steelers are 2-6 and have a steep hill to climb, the notion that this move was a white flag for this season may not be a fair assessment. As head coach Mike Tomlin explained, the move was rather a reflection of their ample talent at the receiver position and inside playmaking with tight end Pat Freiermuth. The last time the team was 2-6 under Tomlin was in 2013, and they wound up going 6-2 to finish the season.

If history tells us anything, it’s that Tomlin is not one to wave the white flag. Granted, this is a different situation given the team playing with a rookie quarterback and young roster. However, this team is still talented and it is not the Steelers’ way to give up on a season.