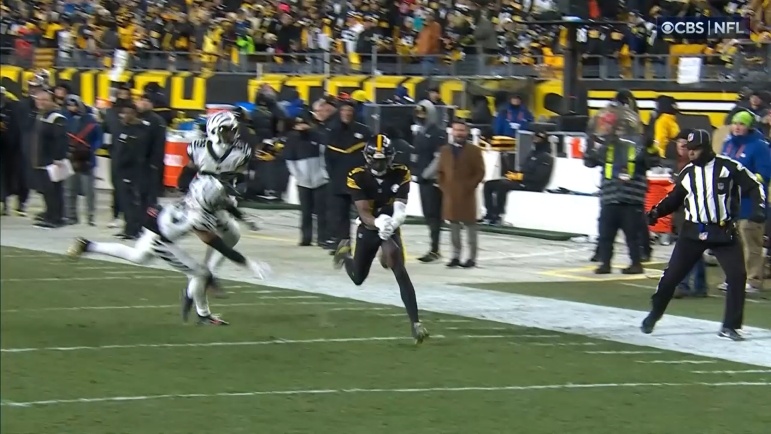 4/83/1. That was Pittsburgh Steelers rookie wide receiver George Pickens’ stat line in Sunday evening’s 37-30 loss to the Cincinnati Bengals. It was arguably Pickens best performance in the black and gold as he caught his second touchdown of the season and put up his second highest yardage of the season while averaging 20.8 yards per catch.

However, despite this impressive performance, Jeff Kerr of CBS Sports believed it should have been better. In his write up about one thing he learned about each NFL team, for the Steelers the headline was:

“George Pickens had a good game and it should have been better.”

Kerr went on about how Pickens is starting to show off his skills that were hyped up during training camp and he is soon due for a breakout performance, but that game could have been this past Sunday.

“Pickens is starting to live up to the hype surrounding him from training camp, finishing with four catches for 83 yards and a touchdown in Sunday’s loss to the Bengals” Kerr wrote. “Pickens had another touchdown slip off his hands late in the fourth quarter. Regardless, Pickens is going to be a very good player in this league for a long time.”

At the end of the game, rookie quarterback Kenny Pickett took a deep shot to Pickens that was perfectly placed that would have surely resulted in a touchdown, but Pickens could not haul the pass in.

If Pickens caught that pass he would have added 49 yards to his total and a touchdown, which would have given him five receptions, 139 yards and two touchdowns. That would have been a Justin Jefferson stat line which Kerr said is coming soon for Pickens.

Pickens rarely drops passes, so it will be unlikely that this becomes a trend, but it is certainly encouraging to see him become more involved in the offense and be part of the few splash plays the Steelers have had this year.

Pickens and Pickett are who Steelers fans are looking at to lead the ballclub to glory in the future, and their connection continues to grow stronger week in and week out. Pickens’ performance this week was almost worthy of rookie of the week, and if caught that deep ball from Pickett he probably could have been in the running for it.

Mistakes are going to happen and that is okay. However, we should all expect Pickens to make up for this coming Monday night against the Indianapolis Colts.