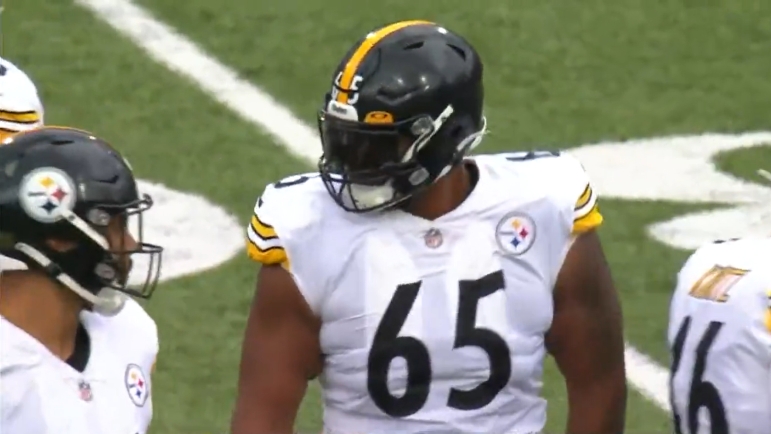 The Pittsburgh Steelers’ bye week has given me a chance to go through tape and evaluate players even closer than usual. While the Steelers’ line is coming off its worst game of the year in Week 8 against the Philadelphia Eagles, I wanted to take a macro look at LT Dan Moore Jr. Like the rest of the line, he has improved since the summer, a time when the Steelers’ line looked a mess and a bottom-three unit. That hasn’t been the case and on an individual level, this group has – as you’d expect – gotten more comfortable and used to new OL coach Pat Meyer’s teachings.

My views on why each lineman is struggling:

For Meyer, and for a lot of o-line coaches, that first punch is everything. You might not be able to win with it alone but you can lose a rep with bad first contact.

Halfway into the season, Moore has gotten much better with using independent hands. Today, we’ll look at some of those preseason struggles and how things look better today.

Here’s Moore against the Jacksonville Jaguars, his and the o-line’s worst pass pro game of the three preseason slate. Against the ROLB, Moore doesn’t have an aggressive set but also uses a two-handed punch. The ROLB, former first-round pick Josh Allen, reads it and dips and rips the edge, causing Moore’s punch to miss. 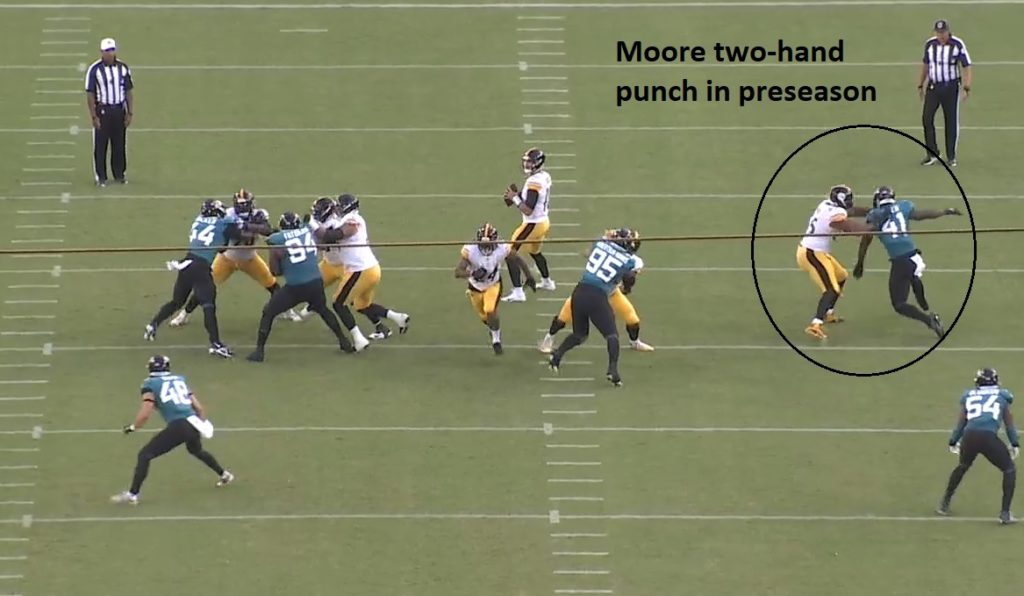 Meyer likes using independent hands for a couple of reasons but one of them is because it’s an all-or-nothing proposition. If you hit, you win. If you miss, both hands miss, and you’re in a bad spot. Here’s how we summed it up in our offseason coaching clinic report.

“Meaning, not two-hand striking very often. He prefers the independent hand method because it eliminates the chance of the defender swiping/wiping away both of the linemen’s hands and getting beat. If one gets knocked down, the lineman still has the other.”

Here’s a great example of that. Moore misses with his punch, meaning he’s missed with both hands, and Allen is able to corner and pressure QB Mitch Trubisky.

While Moore fares better here, you can see the downsides of the two-hand punch. Here, Moore punches too early and doesn’t create good contact, knocking himself off base. The end doesn’t beat him and the ball comes out quickly but Moore’s pass set just looks messy here and overall, it’s not a good rep.

Later in the game against Allen. I’ve slowed this clip down to really demonstrate the two-handed punch. Again versus Allen, you see Moore shoot his hands. But Allen responds with a good cross chip (inside arm/hand to the tackle’s outside half) and he’s able to gain the corner.

Moore is able to recover late and the ball is out on-time so Allen has no shot to pressure but you see Moore struggle to land his punch and consistently secure the edge.

Fast forward to the last couple of weeks. Even in that ugly Eagles game, Moore still looked better and more comfortable with his punch. Here, you see him use and strike with independent hands. Against the RDE, Moore strikes with “first significant contact,” Meyer’s phrase, with his right inside hand while punching with the left hand separately.

He then seals the RDE upfield and keeps the pocket for Pickett. It’s a quality rep.

Now from the Miami game. Against the RDE, Moore strikes and tries to knock down the inside hand of #15, Jaelen Phillips. He also uses his left hand to punch into the chest plate of the defender. Essentially the right hand is more aggressive while his left hand is more safe/secure to control the block.

He’s able to initially rebuff Phillips’ bull rush and though Phillips sheds a bit near the top, Moore still steers him upfield and keeps the pocket clean.

Last rep., Moore against the ROLB again. Here, that right-hand strike is really effective. He’s able to make good first contact into Phillips’ pads and then snatch down on Phillips’ inside/left arm to send him to the ground. His left hand is more of the “anchor” to secure solid contact while the right hand goes for the kill.

Moore sends Phillips into the ground and easily wins this rep, one of his best on the night.

Offensive linemen especially are creatures of habit. They rely on what they know, what they’re comfortable with and what their muscle memory is. They just want to get the job done the way they know how. When Moore had to adjust his sets, being more aggressive, working independent hands, it slowed him down. Made him think. Made him unsure and uncomfortable and rely on his old teachings.

As he repped it more and got more comfortable, he’s really taken hold to what Meyer wants him to do and frankly, has become a better tackle. While Moore probably will never be an elite guy, he’s sorta in that Alejandro Villanueva category but a better run blocker, he has been a better pass protector this season. At least, more consistent. And his independent hand punch has been consistently effective.

Overall, Moore is a hard worker and his game has grown, though Pittsburgh will have to judge if he’s a long-term option. I’d be interested in an upgrade but it’d have to be a top-shelf player you find with a top-10 pick. Essentially, unless the Steelers have a top-10 selection and can get a blue-chip tackle, it’s probably worth looking to upgrade other areas of the line like left guard or center. A mid-round tackle probably wouldn’t be worth the investment because the odds of him being an upgrade aren’t high enough.