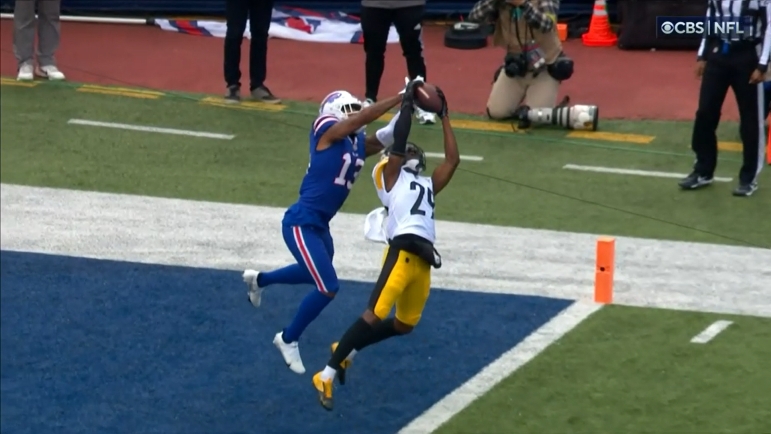 Occam’s Razor. The simplest explanation is most often correct. Clark says Pittsburgh didn’t show any fight. They did. The problem is just they don’t know how to throw a punch. Sometimes that gets misconstrued as being lazy. As Matthew Marczi pointed out, it’s a tidy and easy narrative to fall back on. And looking at the score, 38-3, it feels correct. Clark was a Steeler for eight years and they never got their doors blown off quite like that. But this is a far different team than what Clark was apart of.

Accusing anyone of lacking effort is a weighty charge. The biggest critique you can give a player or team. They don’t care. Not that it’s never warranted, sometimes it’s accurate, but it isn’t a term to loosely and quickly throw around. Athletes are prideful people. There can be so much other context in a play that blaming effort should be the last resort. Clark’s view is understandable, the Bills were more intense, more technical, and just flat out better. But Pittsburgh didn’t mail it in.

If I’m wrong, I’m all ears. Going back through the tape, it didn’t look like anyone quit. Kenny Pickett, as Clark granted, battled throughout, throwing 52 times in a hostile environment versus a Bills’ rush that could pin their ears back by the second quarter. The offensive line kept working, Jaylen Warren ran hard, and even Chase Claypool, who some may argue as a guy who didn’t show great effort, even had this solid finish on a RPO in the second half with the game long decided.

Diontae Johnson was bad, but he wasn’t lazy. In some ways, he showed more effort than I’m used to. More drive as a blocker and for once, he didn’t give up after an interception. Notorious for truly showing zero effort after turnovers, see this play last season and he walked off the field mid-play during the Jets’ end-of-half INT, he actually made the tackle on Pickett’s lone pick of the day.

Half the guys who finished that game are fighting for a job or to keep proving themselves. Josh Jackson. James Pierre. Jamir Jones. Not a group looking to dog it. In a weird way, that second half were big job interviews for those dudes. The only time things felt “off” was James Cook’s 24-yard touchdown, a play that felt a little too easy, but I still can’t fault anyone’s individual effort on that snap.

Arthur Maulet’s postgame anger of teammates smiling and laughing on the sideline is the most damning evidence. But Clark never mentioned it and it’s a separate issue, a sideline versus an in-game issue. We also have no idea if Maulet was referencing just one or two players or a large group, either.

Pittsburgh has a lot of problems. You know that, I know that, they know that. As things sit here today, though, effort – or a lack of – isn’t one of them. But with the Steelers trending towards their worst season in at least two decades, we’ll see if the team can play with effort the rest of the year.