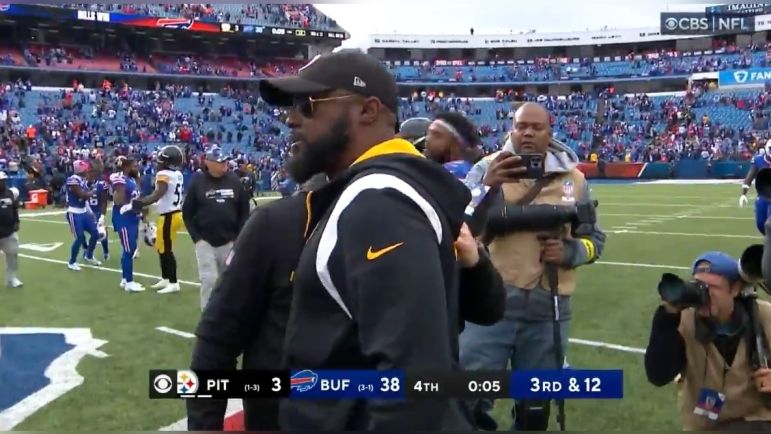 Losing 38-3 is bad enough. Laughing during and after such a loss is worse. That was CB Arthur Maulet’s view of things after the Pittsburgh Steelers were pummeled by the Buffalo Bills Sunday. Pittsburgh Post-Gazette beat writer Ray Fittipaldo was in the locker room postgame and noted a frustrated Maulet, seeing players smile and laugh in the midst of a terrible defeat. Here’s what Fittipaldo wrote for the PPG:

“You have to love this,” Maulet said as he emerged from his locker stall and walked toward the middle of the room.

When several of his teammates tried to quiet him because reporters were present, Maulet did not stop his rant:

“No man, you’re losing like that and guys are laughing and smiling on the sidelines? It’s 38-3 and (people) are laughing on the bench? You have to love it.”

Maulet did not speak with reporters after the game. Linebacker Myles Jack spoke with reporters and was asked about it, per Fittipaldo, with Jack saying he had no problem with Maulet expressing what he thought.

Pittsburgh suffered its worst loss from a point differential standpoint since 1989 when they were shut out by the Cleveland Browns 51-0. The Steelers’ defense was overmatched in every phase, allowing Josh Allen to post over 300 yards by halftime and finish the game with 424, just shy of Tom Brady’s record against the Steelers. If the game was remotely competitive, and Allen was pulled early in the fourth quarter, he would’ve broken it.

The Steelers’ defense has slogged through this season, battling injuries and overall poor play. Until today, they’ve kept the score down but not played well since the opener, failing to generate pressure, not make enough splash plays, and get ground down in the second halves of games.

As Fittipaldo reports, Maulet is clearly frustrated not just by the act of losing but the apparent accepting attitude some teammates are displaying. We’ll have to go back through the team to see if the broadcast caught glimpses of players laughing and smiling on the sideline as Maulet accused them of.

Football is an emotional sport and Maulet is right to vent his frustrations. He’s just the latest to do so this season as the Steelers drop to 1-4. There’s little to smile about and at this rate, it’s only going to get worse.