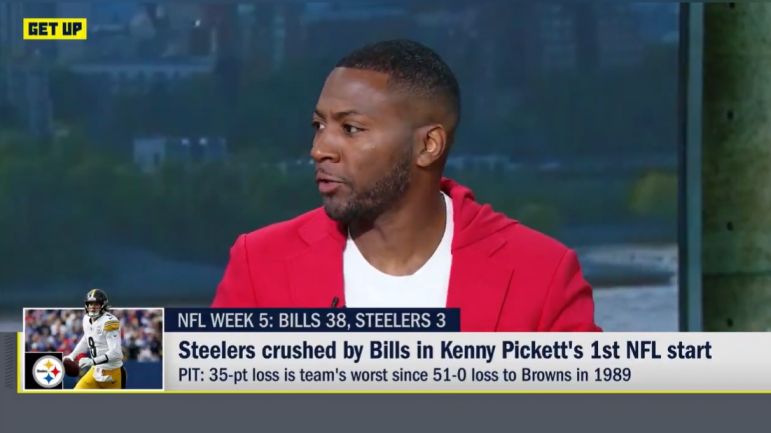 Ryan Clark offered some harsh words after the Pittsburgh Steelers’ ugly 38-3 loss Sunday afternoon to the Buffalo Bills. Appearing on ESPN’s Get Up, Clark accused the Steelers of giving up and stopping the fight as they were pummeled and humiliated by the Bills on the road.

“This team gave up. This team wasn’t playing anymore. It wasn’t important enough for them to go out and have pride in the way they approach the game.”

The 35-point loss is one of the worst in team history and Pittsburgh’s biggest defeat since 1989, when they were blown out by the Cleveland Browns 51-0, a game that’s still considered the worst in Steelers’ history. The Bills game didn’t quite match that, but it sure came close. The game was decided by halftime, Buffalo taking a 31-3 lead into the break, making for back-to-back seasons Pittsburgh’s trailed by 28 at the half, down by the same score to the Cincinnati Bengals last year.

Though a commentary on the players, Clark says that all starts at the top.

“This starts with Coach Tomlin…you have to have this team ready to play.”

Clark’s accusation is a heavy one, and he made only one exception for someone who thought played hard the entire game.

“The only player on this team that I’d take in 2008 to go down an alley with me is the young kid that’s playing quarterback. He’s the only one that wanted some yesterday.”

Of course, that’s referring to rookie quarterback Kenny Pickett. Making his first start, he threw the ball a whopping 52 times, failing to find the end zone but playing well-enough considering the difficult circumstances. Pickett competed and played hard until the end, taking issue with DE Shaq Lawson’s late hit that resulted in a skirmish between both sides.

There’s no question the Steelers are a bad team and simply overmatched yesterday in coaching and in talent. A trend that will continue going forward. Quitting, though, is a weighty charge. It was less about the Steelers not playing hard enough and more about them just not being good enough. Cam Heyward still hustled. Rookie Jaylen Warren ran hard. And James Daniels defended his quarterback even in ugly defeat. Some players may have thrown in the towel, Sunday wasn’t a good day for WRs Chase Claypool or Diontae Johnson, but it’s hard to apply that label to the whole team.

Still, until the Steelers can get back in the win column, or at least not get blown out, they’ll face intense criticism like this. Pittsburgh’s 1-4, losers of four straight, and there isn’t any light at the end of the tunnel.