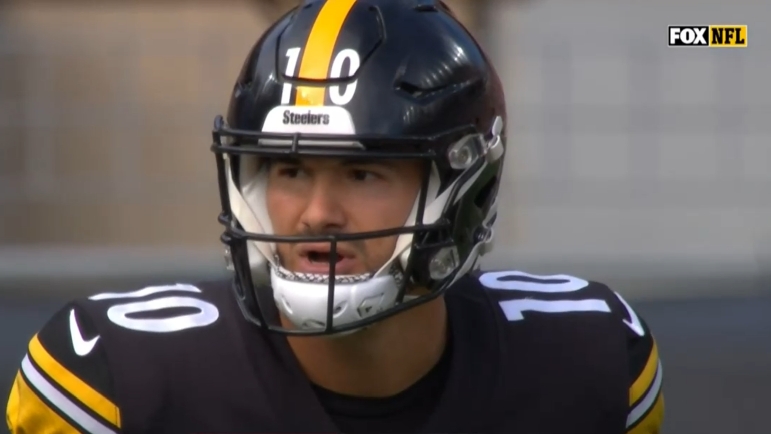 From starter to backup to starter again, Mitch Trubisky’s had a wild start to the first six weeks of his Pittsburgh Steelers’ career. Replacing Kenny Pickett Sunday, Trubisky put points on the board and led the team to an upset victory over the Tampa Bay Buccaneers, finishing the game 9/12 for 144 yards and a crucial fourth quarter touchdown.

In the latest episode of his podcast Footbahlin, Ben Roethlisberger praised what Trubisky was able to come in and do.

“He came in and to be honest, I thought Mitch played as well as I’ve maybe ever seen him play,” Roethlisberger said. “He moved the ball when he had to. Supposedly he made some checks, some audibles. Threw the ball, got some great completions.”

Roethlisberger’s comment about Trubisky making audibles is particularly noteworthy. Weeks ago while still the team’s starter, Trubisky admitted he and Matt Canada were still figuring out how much freedom Trubisky would have to change plays at the line of scrimmage. There’s no question Trubisky came in and took command of the Steelers’ offense. He was decisive, largely accurate, and made big plays on third down. But Roethlisberger said Trubisky’s best play was one where he simply avoided disaster.

“The play of the day that saved the game, that won it for the Steelers was when a bad snap happened. It went on the ground. Went between him and [Najee Harris]. Naj actually kind of falls down. So it’s basically just Mitch, the ball and defender right on his heels…if [Tampa Bay gets] the ball there, they’re gonna score and win the game. I’m just telling you field goal, something’s gonna happen. They’re gonna score. For Mitch to recover that ball was the play of the game. He saved the game, saved the day.”

That came on 2nd and 2 with center Mason Cole snapping short to Trubisky, the ball rolling away. Trubisky hustled and fell on top of the football, crucially retaining possession in a two-point game. Had Tampa Bay recovered, they would’ve had the ball at the Steelers’ 20 needing only a field goal to take the lead.

“For a guy who got benched a couple weeks ago to still show that heart…people need to applaud that,” Roethlisberger said.

Not only did Trubisky recover the fumble, he responded with a 3rd and 15 conversion to Chase Claypool to keep the drive going and the clock moving. Pittsburgh held the ball for the final 4:38, finishing a game for the first time all year. Trubisky made multiple big-time throws on third down, twice connecting with Claypool on third and long during the drive.

It’s uncertain who will be the Steelers’ starter Sunday night against Miami. With Pickett working through concussion protocol, it’s definitely possible Trubisky gets the nod. Even if Pickett clears protocol by week’s end, he may lack the practice reps for Mike Tomlin and the Steelers to feel comfortable turning to him. If Trubisky can lead the Steelers to another upset win, he might not give the job back, though Tomlin will have to juggle Trubisky’s play with the prospect of playing quarterback roulette so many times in a season.

Check out the latest episode of Roethlisberger’s podcast below.