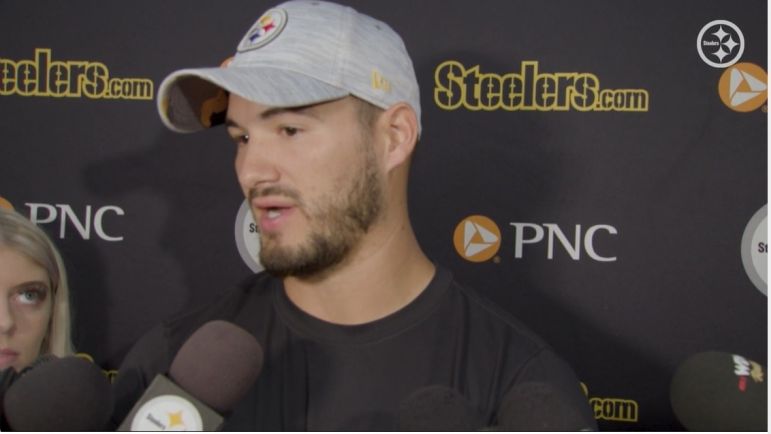 If the Pittsburgh Steelers’ offense looks more static in 2022 than past seasons, you’re not wrong. While Ben Roethlisberger had complete autonomy over the Steelers’ offense, able to audible, check, and change at a moment’s notice, Mitch Trubisky hasn’t been afforded that luxury. Speaking to reporters today via Steelers.com, Trubisky says the offense is still figuring out how often he can change the play.

“It’s still early in the offense and we’re still figuring out when is a good time for me to audible and if within each play I have the option to do so,” he said. “I think that’s something that we’re just continually going over about if I can audible within each play and when’s a good time to do so. We’re still learning and growing from that and I think that’s just communication between me and the coaches and continuing getting into the  the right play for this offense and when to do so.”

Generally, the Steelers haven’t appeared to audible often this season. That isn’t to say they’ve yet to do it, there was a clear example of Trubisky changing the play in Week One against the Cincinnati Bengals, one that led to miscommunication and LG Kevin Dotson executing the wrong assignment. But overall, Trubisky has played within the structure of Matt Canada’s offense.

He also confirmed there are plays where he does not have the option to audible.

“Not necessarily every play.”

While that could change throughout the season, this is a quarterback making his second career regular season start with the team, Trubisky also isn’t a rookie. He’s 26 with tons of starting experience and has the IQ to run an offense and change plays at the line. That lack of freedom is one reason why Pittsburgh’s offense looks stuck, unable to get out of bad calls if they get the “wrong” look from the defense. Through two games, the Steelers have fun fewer RPOs than they did last year under Ben Roethlisberger when that was a staple of the offense, though Trubisky made a terrible decision on one of the RPOs called Sunday against the Patriots.

Asked about Trubisky’s freedom, OC Matt Canada pointed out the change in going from Roethlisberger to Trubisky.

“We had a guy who played 18 years (and went) to a guy who just got here with a bunch of young players. I think we’re slowly building to that. Obviously, we didn’t get the result we wanted Sunday and we didn’t score enough the week before….we have to keep working at that and adding certain things we think will help each week without creating any kind of missed assignments or communication issues.”

While it was a change in quarterback, Canada isn’t a long-time member of the Steelers’ coaching staff. Last year was his first with Roethlisberger as OC, this year his first with Trubisky. And Trubisky isn’t a guy just starting his NFL career either.

Last year, the talk was about Roethlisberger’s limited ability to run no-huddle. That progressed throughout the season in part because it had to, the Steelers playing from behind game-after-game. Perhaps Trubisky could earn more freedom as the year goes on. Of course, the longer this offense is limited and unproductive, the higher the odds Trubisky won’t be under center long enough to earn that right. They’ll change to Kenny Pickett, who probably will have no ability to change the play at the line.