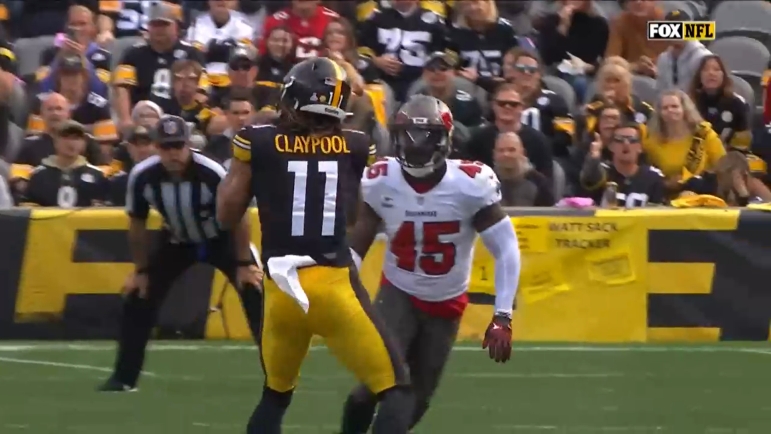 Coming off arguably the most complete game of his career as a receiver, third-year Pittsburgh Steelers wide receiver Chase Claypool is reportedly generating a lot of attention on the trade market.

But, despite some of the rumors and continuous inclusion of his name in trade talk across the NFL, the third-year receiver is not expected to be traded by the Nov. 1 trade deadline, “barring a shift” according to NFL Network insider Ian Rapoport, who reported the news Sunday morning on Twitter.

Big-name WRs generating trade interest:
— #Texans WR Brandin Cooks has been the target of multiple calls.
— #Steelers WR Chase Claypool has been in focus, but is not expected to be deal, barring a shift.
— Broncos WR Jerry Jeudy has been the center of calls, as DEN sputtered.

Despite the expectation that Claypool won’t be traded, the Steelers receiver continues to be part of trade focus across the league.

Earlier in the week, ESPN’s Jeremy Fowler connected the Green Bay Packers to Claypool again, following up on an offseason trade rumor that had the Packers interested in the big Steelers receiver.

“A few general managers I’ve spoken to are certain Green Bay is looking for potential receiver help on the trade market,” said Fowler for ESPN. “One player who makes sense is Pittsburgh’s Chase Claypool, who multiple execs believe was available in the preseason, though at a hefty price. Claypool is coming off a big seven-catch, 96-yard game to get back on track, so perhaps that makes him more attractive for the Steelers to keep. The rumors of his availability have persisted for a while now, though. He’s a major talent whose production has declined in each of the past two years.”

Prior to his Week 6 against the Tampa Bay Buccaneers, Claypool had been rather disappointing in the two seasons since his impressive rookie season. After the huge performance, the Steelers seem keen to build on the performance, rather than worrying about boosting his trade value and shipping him to another team, especially with the former Notre Dame star having one more year under contract after the 2022 season.

Currently, the Steelers’ outlook for the rest of the 2022 season hangs in the balance with the team sitting at 2-4 and facing two rather tough games ahead against the Miami Dolphins Sunday night and the undefeated Philadelphia Eagles in Week 8 prior to the Week 9 bye. Right now, according to Pittsburgh Post-Gazette insider Gerry Dulac, the Steelers have no desire to move the third-year receiver.

Chase Claypool vs the Bucs:

Put some respect on his name 🗣 pic.twitter.com/MnSgUv3ILc

“The Steelers are not trying to trade Claypool or even looking to trade him,” Dulac writes. “Not unless some team comes knocking on their door with a deal that is just too good to pass up. And that hasn’t happened.”

The NFL’s trade deadline sits just nine days away at 1 p.m. EST. Claypool continues to be part of trade rumors and discussions, but the Steelers don’t seem interested in dealing him just to deal him. Stay tuned.