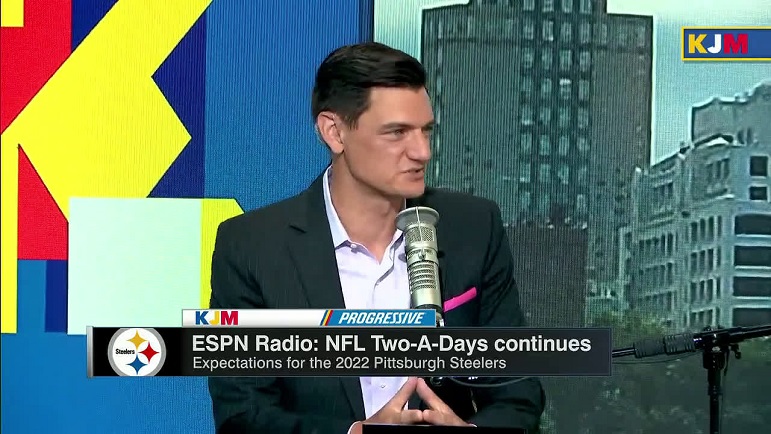 The NFL trade deadline is fast approaching, and the rumor mill is running hot.

Pittsburgh Steelers WR Chase Claypool has often been associated with trade talk given his underwhelming performance last season and to start the 2022 season. That was until Claypool became the featured receiver this past Sunday against the Tampa Bay Buccaneers where he caught all six of his targets for 96 yards and the go-ahead TD, helping Pittsburgh pull off the big home upset against Tom Brady and the Bucs.

However, Claypool may have just boosted his stock ahead of the November 1 trade deadline after posting his best performance since Week 5 of last season. At least that is what ESPN insider Jeremy Fowler mentioned at the conclusion of Week 6’s slate of games, linking Claypool specifically to one WR-needy team in desperate need of equipping their star QB with weapons to make a playoff run.

“A few general managers I’ve spoken to are certain Green Bay is looking for potential receiver help on the trade market,” said Fowler for ESPN. “One player who makes sense is Pittsburgh’s Chase Claypool, who multiple execs believe was available in the preseason, though at a hefty price. Claypool is coming off a big seven-catch, 96-yard game to get back on track, so perhaps that makes him more attractive for the Steelers to keep. The rumors of his availability have persisted for a while now, though. He’s a major talent whose production has declined in each of the past two years.”

Should Pittsburgh Consider Trading Chase Claypool Before The Trade Deadline?

The wide receivers in Green Bay haven’t been getting the job done for Aaron Rodgers, who noticeably doesn’t look the same without Davante Adams in town. Rodgers is used to throwing up passes to physical receivers he can trust to come down with the ball, so Claypool could figuratively be a fit given his size, athleticism, and skill set as a big-bodied, jump ball specialist.

“A few general managers I’ve spoken to are certain Green Bay is looking for potential receiver help on the trade market,” — @JFowlerESPN who suggests Chase Claypool as a potential target.

Fowler has been saying since before the draft, a Claypool trade is in play for PIT.

Fowler didn’t stop there when listing potential Steelers who could be on the move, following up his Claypool comment with another Steeler that played well this preseason and has circulated through trade talks: QB Mason Rudolph.

“The Steelers always have kept three quarterbacks on the active roster, but they will field calls on third-stringer Mason Rudolph if teams show interest around the deadline,” Fowler said on Rudolph. “Rudolph’s best bet might be as a high-level backup for a West Coast team, such as the Rams (whose passing game coordinator, Zac Robinson, was an accomplished Oklahoma State quarterback like Rudolph) or the 49ers.”

Fowler mentioned the Los Angeles Rams as a potential fit for Rudolph, which is oddly enough the same team that Steelers Depot’s very own Alex Kozora connected Rudolph to back in August, also mentioning the connection to Zac Robinson as a key aspect of a potential deal as well as the ongoing issues surrounding Matthew Stafford’s elbow calling for the need of a high-end backup to keep the Rams afloat should the veteran ever have to miss any time.

Both Rudolph and Claypool make sense as potential tradable assets to net Pittsburgh much-needed draft capital in the 2023 NFL Draft. Rudolph is in the final year of his contract and is all but certainly not coming back next season in hope of finding a better opportunity elsewhere. The Steelers face a similar possible scenario with Chase Claypool, who looked to be on his way out after next season the way things were trending. Instead of selling him low, Pittsburgh could have the opportunity to sell high on Claypool to a team in desperate need for WRs like the Packers, who Fowler mentioned, as well as the Rams, Giants, or another squad in need of a young, physically gifted playmaker.

While Claypool’s trade value is currently up after Sunday and Rudolph makes sense to deal now given that he only has 11 games left with the team under contract, the possibility of either getting dealt before the trade deadline likely has decreased for a team that likely still believes that they are in the thick of it in terms of contending for a playoff spot. While Pittsburgh could try and sell now, they will likely opt to keep both to see what the rest of 2022 holds for the 23-year-old receiver, who still has one year left on his rookie contract, as well as Rudolph, who is in line for the backup job this Sunday night with Kenny Pickett potentially missing more time while in concussion protocol.