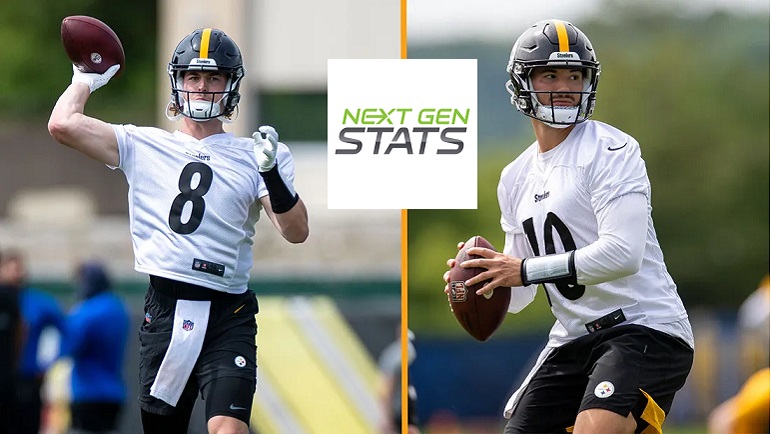 With a six week sample size built up, I wanted to continue dissecting the quarterback play for the Pittsburgh Steelers. I have been charting the passing locations for Kenny Pickett and Mitch Trubisky weekly, and today I wanted to provide a variety of data points to see how the two have compared.

After charting the passes for the game against the Buccaneers, I was curious to see how Pickett’s low air yards (only three passes past ten yards) compared to the NFL in week six: 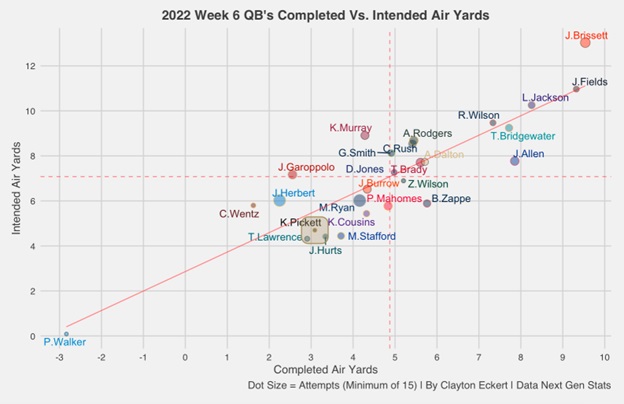 On Pickett’s 18 attempts before leaving the game injured, we can see he was well below average in terms of air yards as expected. His 4.7 average intended air yards was 23rd out of 27 quarterbacks with at least 15 attempts, along with a 3.1 completed air yards number that ranked 22nd. While the numbers will surely need to increase moving forward, the visual shows that it could have been worse (Carolina quarterback Phillip Walker, ouch!). Trubisky did not meet the minimum attempts with only 12, but for comparison had a 10.6 ADOT (average distance of target) in the game according to PFF. 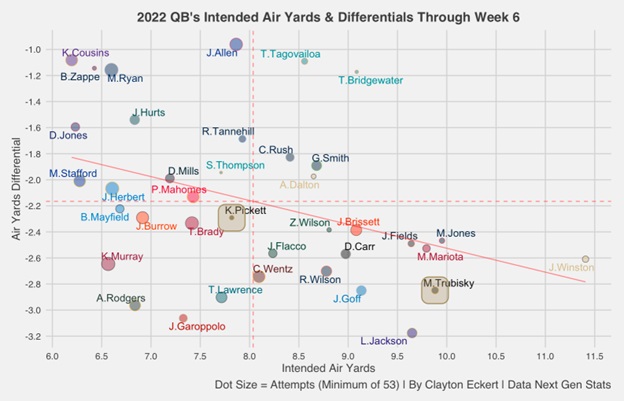 On the season, Trubisky has the third ranked intended air yards number of 9.88 out of the 38 quarterbacks on the graph. The completed number is a different story, at 7.03 which ranks seventh. This visual gives important context to those seemingly good marks, with a sixth worst -2.85 air yards differential, highlighting the lack of connection especially downfield (only 33.3% of his explosive air yard passes being completed according to my charting). Pickett is below the mean in both data points, with a 7.82 intended air yards number that ranks 21st. His air yards differential is a healthier -2.3, ranking 20th and highlights his stronger connection, which is obviously the more important of the two. Pickett’s overall completion percentage is 63.9% for an impressive 12th rank in the NFL, compared to Trubisky’s 60.1% (29th).

With this in mind, I wanted to layer more context with on target vs. bad throw percentages from Pro Football Reference to continue to shed light on the quality of the quarterbacks passes: 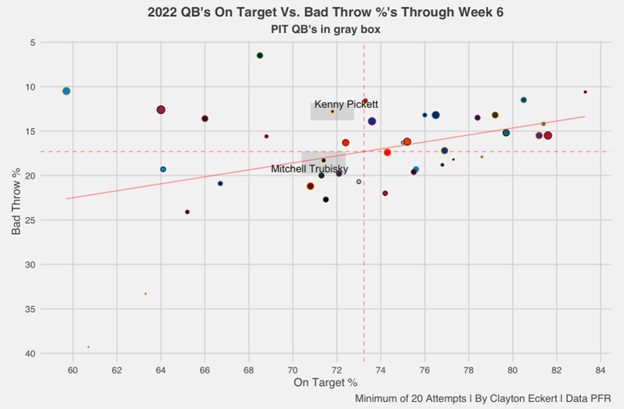 Here we can see Pickett has the only above the mean result for Pittsburgh, with a low rate of bad throws. Looking at raw stats this may be surprising, considering Pickett has four interceptions to Trubisky’s two. Three of Pickett’s interceptions came in week four against the Jets, with two bouncing off receivers’ hands and the other on a hail mary. In comparison, both of Trubisky’s interceptions were tipped by defenders, so while his total number is lower, the context amplifies his being worse. On average, Pickett’s bad throw percentage of 12.8 ranks an impressive seventh in the league, compared to Trubisky’s 18.3% that ranks 27th. Both quarterbacks are below the mean in on target percentage, with Pickett having the slightly better mark of 71.8% that ranks 27th, and Trubisky is at 71.4% for the 29th rank.

Another aspect I wanted to look at is EPA (expected points added), considering the obvious and ultimate goal in any game is to score points. Let’s see how the two have fared by week, with dots for the rest of the NFL for context: 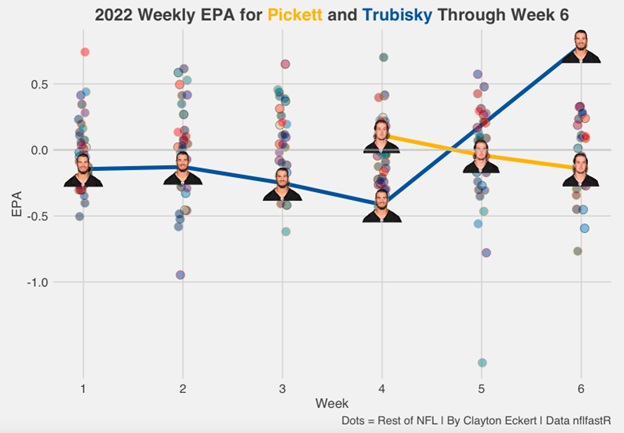 In Trubisky’s four starts to begin the season, he posted negative EPA numbers each week. The week four game against the Jets was the lowest mark for either Steelers quarterback (-0.41) and was the second worst in the league. This highlights the decision to bench him and go with Pickett in the second half, where he posted the first positive EPA for the team (0.11) on the season, which ranked 10th in the NFL in week four. His EPA then steadily dipped the following two weeks, with his most recent showing against the Bucs being his lowest result to date (-0.14), but was better mark than three of Trubisky’s starts (week 1, 3, and 4). After Pickett left the week six game due to injury in the middle of the third quarter, Trubisky came in and played extremely well as highlighted by the chart, posting a 0.79 EPA that was by far the best mark for any quarterback on the season (0.79)!

This highlights the understandable conversation of who should start moving forward, with Trubisky’s very strong outing particularly in situational football in the fourth quarter, converting all five of his third down attempts and in the red zone with a touchdown, but very important to remember this came on only 12 attempts along with his previous EPA results. We are human, and recency tends to prevail in our opinions, but I am in the camp of continuing forward with Pickett all things considered, which coach Mike Tomlin announced is the teams’ plan if he’s healthy. It will be interesting to sit back and watch how things continue to unfold, and see how Pickett trends moving forward and if he continues practicing in full as he did on Wednesday.

To close, here is a table of the data used today:

Where do you stand on the quarterback play up to this point? Do you agree with the teams decision to move forward with Pickett as long as he’s healthy? Thanks for reading and let me know your thoughts in the comments!