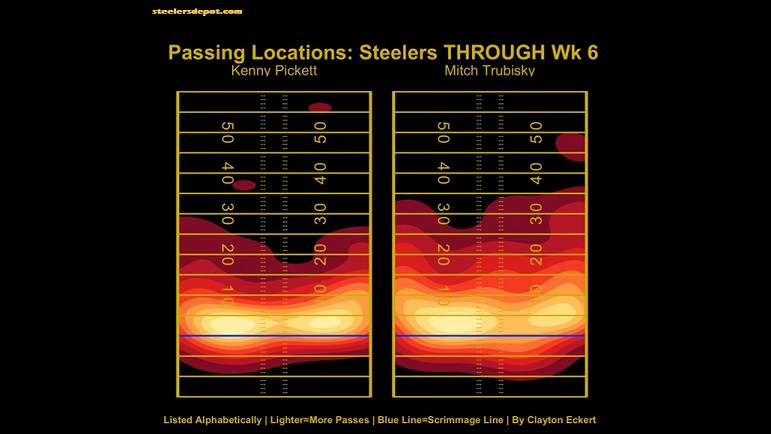 With Week 6 in the books, it’s time to provide my quarterback passing locations charting for the game and the regular season thus far. In case you missed the previous articles, I will be charting, visualizing, and providing takeaways for the all-important quarterback position for the Pittsburgh Steelers. Thanks to Thomas Mock for his great article that helped me learn much of what I’m using today. Couple notes before we jump in. All yardage referenced are air yards from the line of scrimmage and bats at the line of scrimmage, spikes, and clear throwaways removed. This week’s charting has three throwaways and a bat removed.

Quarterback Kenny Pickett made his second start, his first at home in the great win against the Tampa Bay Buccaneers, going 11/18 on the stat sheet for 67 yards, a touchdown, no interceptions, and sacked once. He did avoid two sacks by throwing the ball away, making better decisions than last week when he ran out of bounds on one. Pickett led a great opening drive, going a perfect 5/5 on short targets, which was the theme of the game, including his touchdown which was a good play design where two receivers to the left ran in routes and cleared wide open space for the dump off and easy waltz in by running back Najee Harris for the score. The connection with wide receiver Diontae Johnson was encouragingly better this week overall, going 5/6 to him with two great above the head catches, and the incompletion was a route he slipped on. On the flip side, Pickett and wide receiver George Pickens struggled to connect, only 1/4 with accuracy/timing issues (more on this in a bit), with the one catch coming on the first play of the game. Pickett was injured on a hit mid third quarter that kept him out for the rest of the game.

Fellow quarterback Mitch Trubisky came in to close the game and played very well. He went 9/12 for 144 yards, one touchdown, no interceptions, and a sack where he had options downfield, but instead held the ball too long. Speaking of downfield, that was the biggest difference between the two in the game, with Trubisky targeting the intermediate range with success. The touchdown was on a nice end zone throw where only wide receiver Chase Claypool (caught all seven of his total targets) could make the play, the first one for the position room all season. Their connection was impressive, a perfect 5/5 including three third and long conversions (two to put the game away), and the only explosive (20+ air yards) on the final pass of the game. On another third down, Pittsburgh used tempo and got a free play with the Bucs having to many men on the field, and getting it to the wide-open tight end Connor Heyward for the teams first double explosive gain of 45 (13 air yards). Both quarterbacks took care of the ball with no interceptions, and benefitted from an ideal game script, a close game throughout that has been rare in 2022, with only 30 total passes in the game.

Let’s start with a simple view of the 26 charted passes for both quarterbacks, with number of throws and pass distances for Week 6: 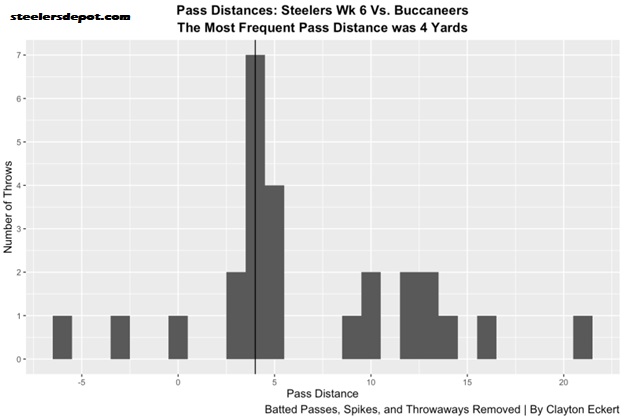 A whopping seven passes went four air yards, and 53.8% of all passes were in the 0-5 range. This number crushes an already high amount in Pickett’s first start last week (44.9%), by far the highest rate on the season, with the game being close throughout having much to do with this. Encouragingly there was more variety on these routes, including an early slant and a second quarter in route to Johnson. Another quality play early in the game was to Claypool, with an impressive 11 YAC yards which was another quality element to his great game. Hopefully Pittsburgh’s offense continues to build on these things moving forward.

26.9% of passes were 5-10 yards with several stop routes but included the aforementioned over the head catch by Johnson on the sideline and the Claypool touchdown, and one of Trubisky’s incompletions on a throw behind Johnson that was tipped on third down. 10-15 yard passes shared the same percentage for the second most common pass distance. 7.7% of passes were behind the line of scrimmage, both to running back Najee Harris who provided good YAC and a touchdown. Only one pass (3.8%) went 15-20 yards on a missed opportunity from Pickett to Pickens that stalled the drive that was unable to capitalize off a huge kick return, and only one explosive attempt mentioned earlier.

Here are the dots for the charted throws for week six as we add more context: 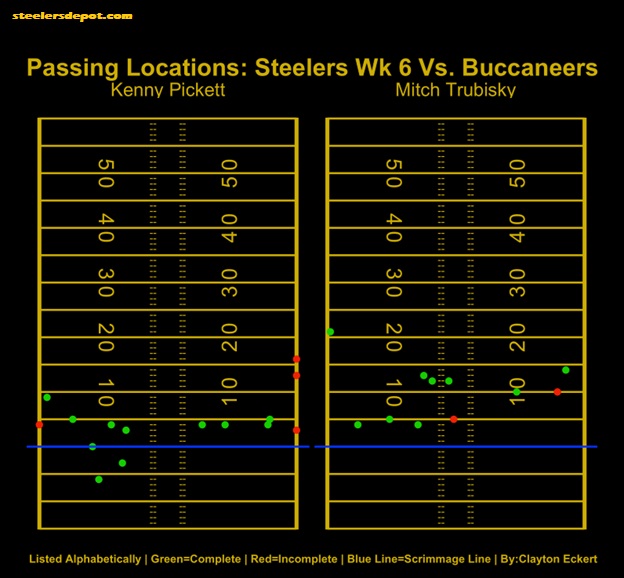 Very sparce chart for the week, in attempts and pass distances as highlighted earlier. Pickett was a perfect 3/3 at or behind the line, with each of these passes going to the left side. He went 8/10 from 0-5 yards with an even split to each side of the field, and his two incompletions on the sidelines including an inaccurate throw behind Pickens. He went 3/3 from 5-10 yards including the great third down conversion to Johnson, catching it over his head along the sideline for nine yards. Only two throws past ten yards, both incomplete to Pickens on the right sideline, where all of his total incompletions also were. Also, no passes between the hashes and interested to track all this moving forward. Here’s to hoping the Pickett/Pickens connection returns to week five form, along with more diversity in pass distance and middle of the field targets moving forward.

In comparison to Pickett, Trubisky wen 6/7 past ten yards in his quality performance. Five of the six completions were on third down, with all five completions going for conversions! Two of these were short of the sticks where Claypool provided the necessary YAC as mentioned earlier including a rare middle of the field target. Trubisky went 3/4 at 0-5 yards, with the incompletion another middle of the field target to Harris on the stop route but jarred loose on the hit, and the three completions all to the left. He had the only explosive attempt of the game, on a scramble drill to find Claypool, who did an awesome job to work upfield and make a stellar catch on the great back shoulder throw to put the game away.

Now for the heat maps, first with all the charted throws, then completions only for week six: 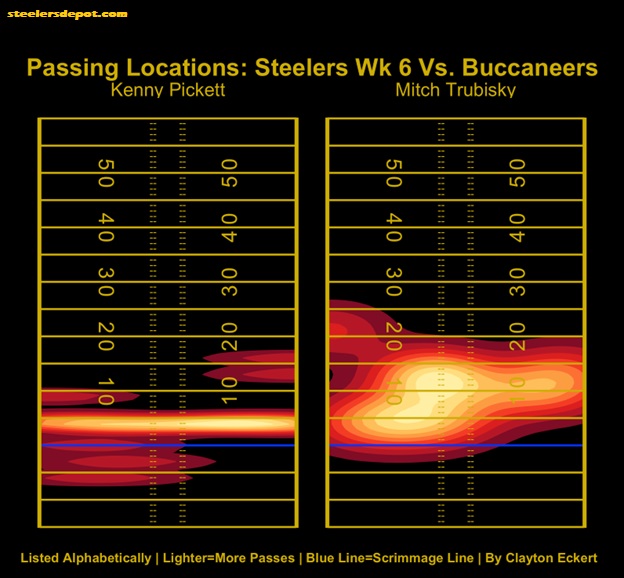 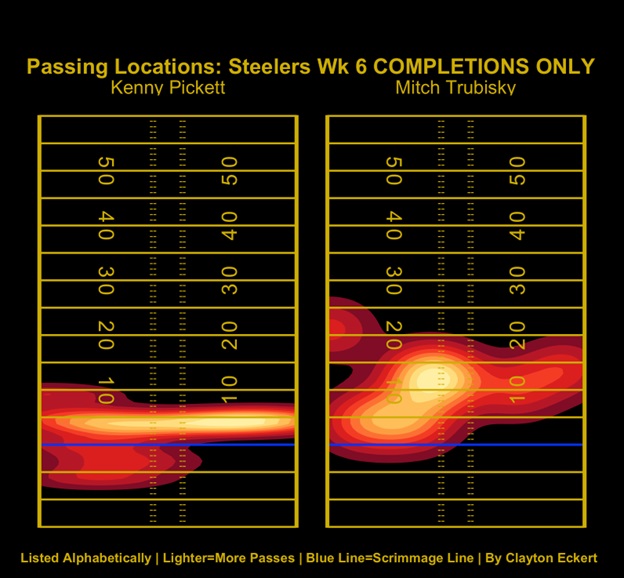 Neither chart for Pickett is flattering to say the least, with the first chart really highlighting how dink and dunk his game was, with only three passes past five yards and only one completion (for an even emptier completions chart!), wow. Most of his throws (and completions) were to the right at four yards. Trubisky’s charts look like a Van Gogh in comparison, which says a lot considering he did not sling it at a high rate either, and completing his longest pass distances for a healthier completions only graph (and game). He targeted the middle to the left numbers in the 5-15 yard range, with his completions going in the 10-15 range near the hash or between the numbers. Only one explosive pass attempt in a win against quarterback Tom Brady and the Tampa Bay Buccaneers, pretty crazy.

Now let’s look at the total number of throws and pass distances for the 198 charted throws for Pickett and Trubisky throughout the regular season: 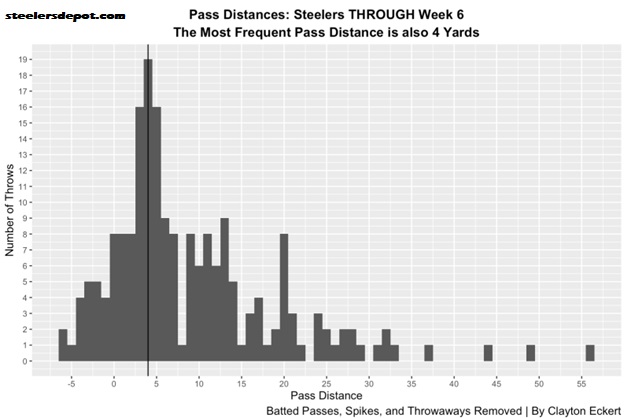 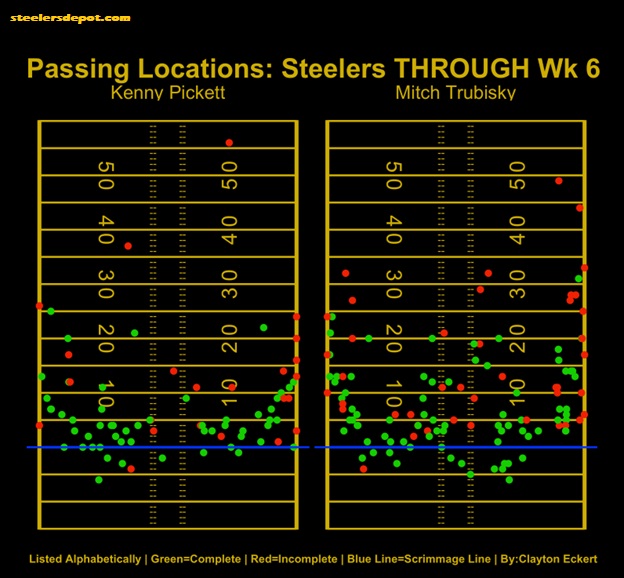 Some big differences and takeaways as Pickett’s sample size grows. Both quarterbacks are still highly successful behind the line. Each have a high rate of incompletions on the sidelines, particularly to the right where Pickett has eight and Trubisky with 11 on charted throws. Pickett is 7/16 in the intermediate range (43.8%), which is down from 50% through week five. Trubisky is 22/37 for a strong 59.5%, seeing an uptick with his week six performance. The team is now 11/31 on explosives (35.5%), with Pickett 4/9 (44.4%) with no attempts in week six, and Trubisky improving to 7/21, but still a low 33.3%. Here’s to hoping the completion. rate can improve to help the offense trend positively moving forward. 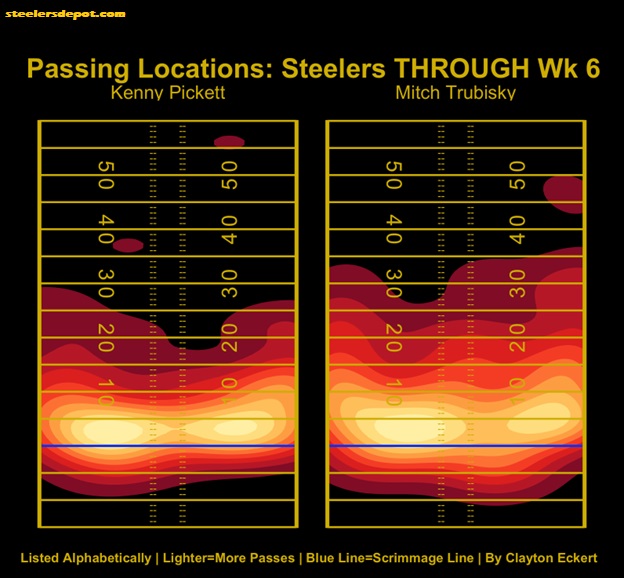 The heat map for the season looks very similar to how it did following week five, considering the pass depths did not expand. Pickett’s most common pass locations are on the left 0-5 yards as highlighted earlier. Very similar for Trubisky, with a slightly wider range especially to the right, extending further to the sideline and a couple yards further to seven yards. The latter’s overall pass depth is healthier, but let’s look at completions only for more context. 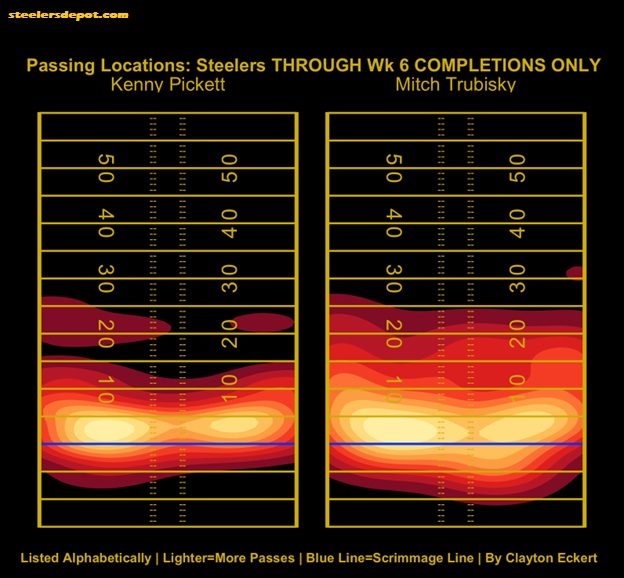 Here we see both quarterbacks charts taking the expected hit as usual, Pickett in particular with his longest at 25 yards. Trubisky’s longest completion was 31 yards, highlighting the team having no double explosive pass completions on the season. While many firsts were accomplished in week six against the Buccaneers, this is one I hope will be accomplished soon as the offense continues to find its footing in this 2022 journey. 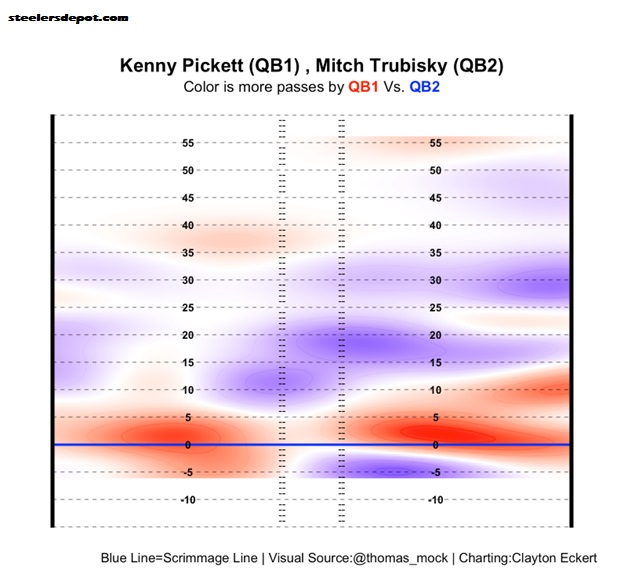 What are your thoughts of the quarterback play in the impressive win? Thanks for reading and let me know your thoughts in the comments!