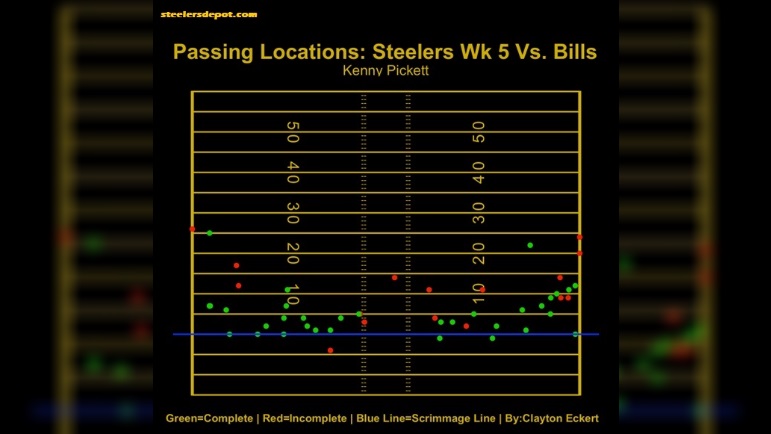 With week five in the books, it’s time to provide my quarterback passing locations charting for the game and the regular season thus far. In case you missed the previous articles, I will be charting, visualizing, and providing takeaways for the all-important quarterback position for the Pittsburgh Steelers. Thanks to Thomas Mock for his great article that helped me learn much of what I’m using today. Couple notes before we jump in. All yardage referenced are air yards from the line of scrimmage and bats at the line of scrimmage, spikes, and clear throwaways removed. This week’s charting has two bats and a throwaway removed.

Steelers quarterback Kenny Pickett made his first start, going 34/52 for 327 yards, no touchdowns, and interception on an underthrow to wide receiver Diontae Johnson, and was sacked three times, two of which were on third down and one was unnecessary running out of bounds. I counted six tipped passes at the catch point, some off the wide receivers’ hands and others defensed, popping in the air creating interception opportunities. We saw this in Pickett’s debut as well in the second half of week four when he had three interceptions, and the team was lucky he only had one against the strong Bills defense.

The receivers need to make more plays for their quarterback, with no wide receiver having a touchdown still (through five games!). Particularly noted Johnson having several missed opportunities, including a middle of the field drop through his hands, one that was initially caught but jarred loose on the sideline, and three “near catches” on the sidelines. While they were difficult, star receivers are expected and need to convert some of those. Really looking for him to start stepping up in hopes for a positive offensive trend moving forward. Thought George Pickens was the exception in the wide receiver room, making several impressive catches, and running back Jaylen Warren provided great value with YAC, eluding first tackle attempts and refusing to go down routinely.

Let’s start with a simple view of the 49 charted passes with number of throws and pass distances for week five: 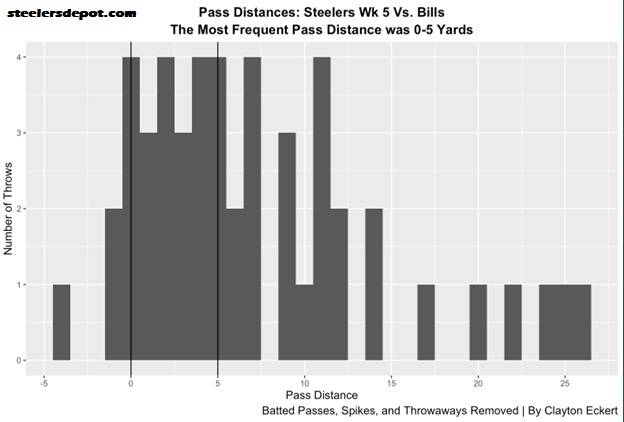 We see a much different chart than last week when Pickett and quarterback Mitch Trubisky played, starting with twice as many attempts this week given the game script. In his first start, Pickett threw a whopping 44.9% of his charted passes 0-5 yards, by far the most on the season. Some of this was likely easing him into action, but mostly Buffalo playing off the majority of the second half when he threw 63.3% of his passes, encouraging such throws. This was a big factor in allowing all but four passes in this range in week five to have positive YAC, but only 1/4 on third down.

The second most common pass distance of the game was 5-10 yards, at 28.6%. 18.4% of passes were 10-15 yards for the third most common pass depth. Only 10.2% were explosive passes, compared to an extremely high number in week three (34.6%) and was the second lowest in a game this season (9.3% against the Patriots in week two). Three attempts were behind the line of scrimmage (6.1%). 15-20 yard passes are an area I’ve been clamoring for all season, but only two attempts in this area (4.1%) for the least common pass distance of the game.

Here are the dots and heat map comparisons of the completions and incompletions for week five for more context: 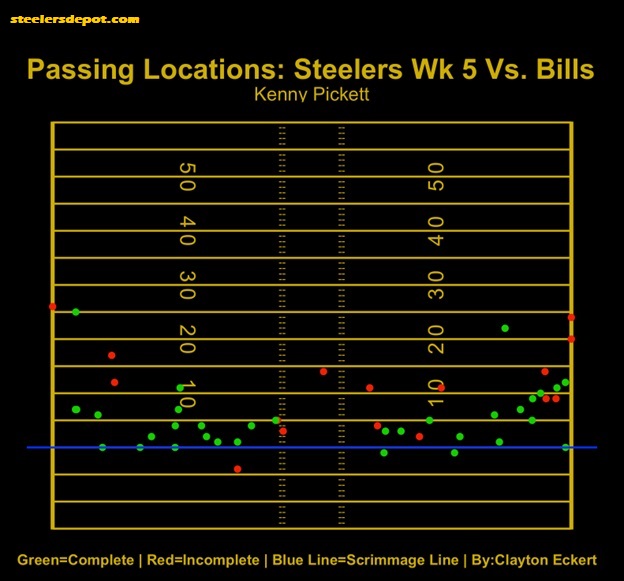 Here we get more context to the pass distances with the areas of the field the players targeted. We can really see the domination of 0-10 yard targets in the game, with Pickett particularly successful throwing to the left, going 14-16 from the hash out at this distance and 100% outside the numbers. Past ten yards was a different story, going 4/9 from 10-15 yards including a scarce 0/2 between the numbers, 0/2 from the least common pass distance of 15-20, and 2/5 on explosives with the longest being a 26-yard incompletion intended for Johnson. The longest completion was 25 yards, a great throw for a leaping extended hands catch by Pickens, for a third down conversion. Speaking of conversions, Pittsburgh went 5/18 on late downs (third and fourth), only 27.8% compared to 55.6% for the Bills offense, with two of Pittsburgh’s coming on the encouraging first drive on a sideline comeback from Pickens and the other on a crosser to tight end Zach Gentry.

Here are the heat maps for the charted throws, then completions for week five: 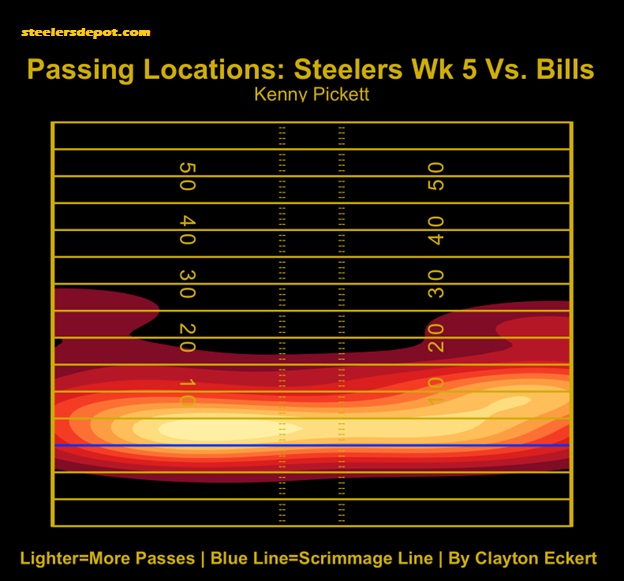 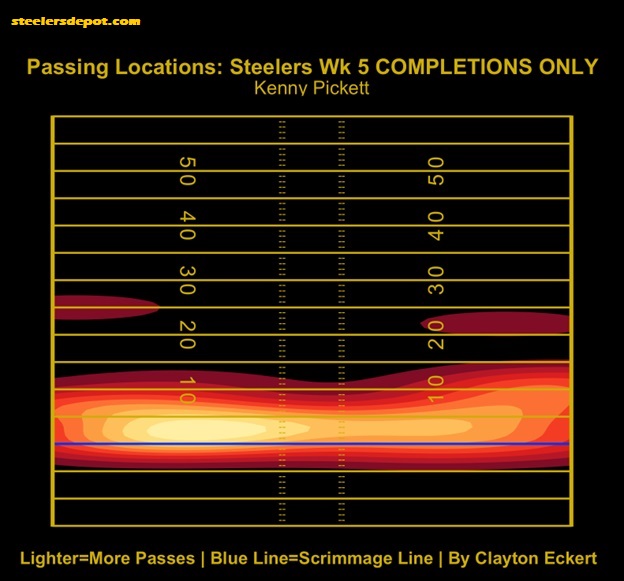 Yikes. The heat maps for the charted throws in the first visual are already lacking, and Pickett’s completions really paint a stark picture to what transpired on Sunday. Most of his throws (and completions) were 0-5 yards to the left, from outside the left hash to outside the left numbers. The completions visual reiterates the lack of success in explosives, and particularly the intermediate range. Here’s to hoping that improves moving forward.

Now let’s look at the total number of throws and pass distances for the 172 charted throws for Pickett and Trubisky throughout the regular season: 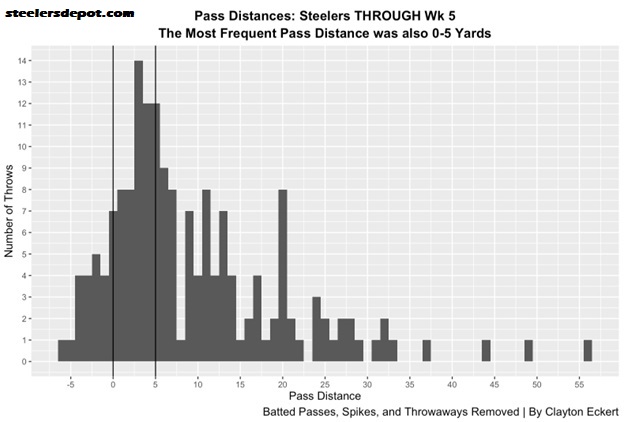 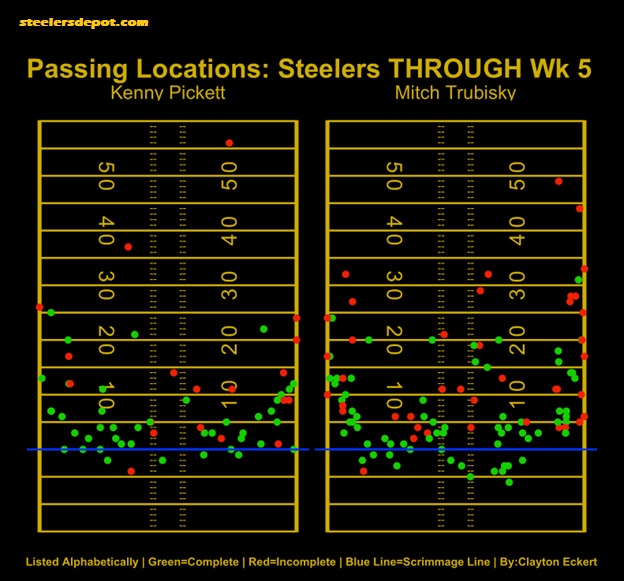 Some big differences to note so far between the two, though it’s important to note Pickett’s smaller sample size. Trubisky threw behind the line at a higher rate, with both converting at a high rate. Pickett’s incompletions in the 0-10 range have mostly been to the right, compared to Trubisky’s which were more dispersed. Pickett is 50% in the intermediate range (10-20 yards) on the season, compared to Trubisky’s 58%. The team is 10/30 (33.3%) on explosives, with Pickett at 4/9 (44.4%) and Trubisky’s very poor 6/21 (28.6%).  While the frequency at this range will likely be smaller for Pickett than Trubisky, I don’t think that’s a bad thing, hopefully getting more quality in the process. 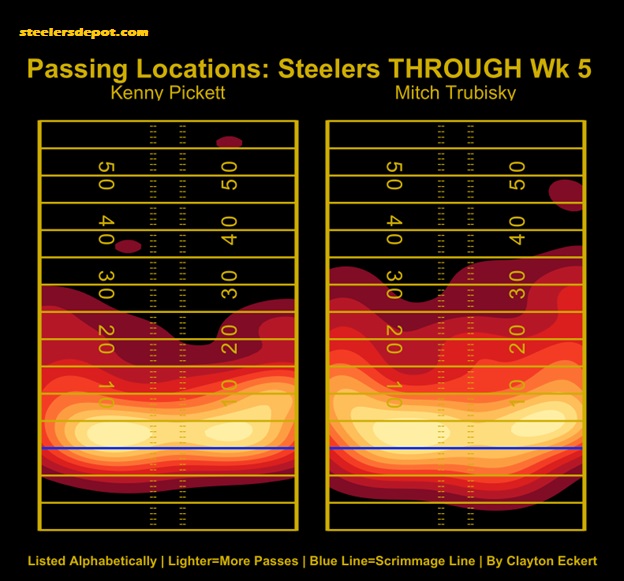 In Pickett’s game and a half on the season thus far, his most common pass locations are on the left 0-5 yards as highlighted earlier, along with more on the right side in his first game action in week four. Very similar for Trubisky, with a slightly wider range especially to the right, extending further to the sideline and a couple yards further to seven yards. The latter’s overall pass depth was healthier, but let’s look at completions only for more context. 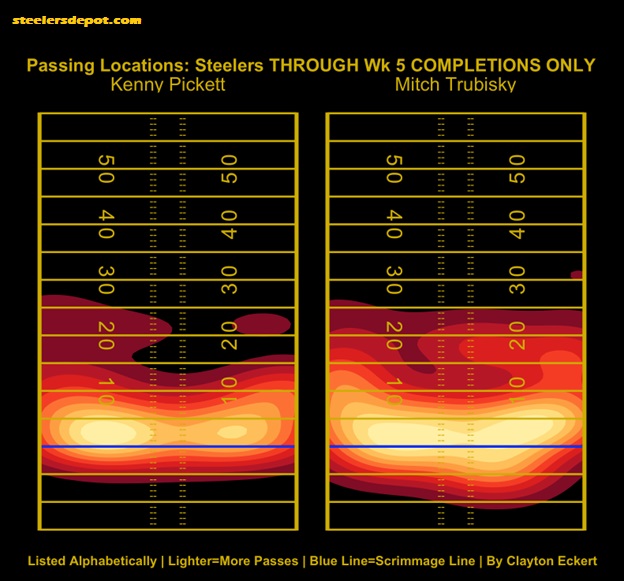 Here we can see both quarterbacks’ deep passes take a hit as expected, especially to the right where they are only 4/17 as a team (23.5%), with Pickett going 1/4 thus far. We can also see his lack of success in the intermediate range in comparison to Trubisky, something I am definitely eager to track in hopes of improvement moving forward. 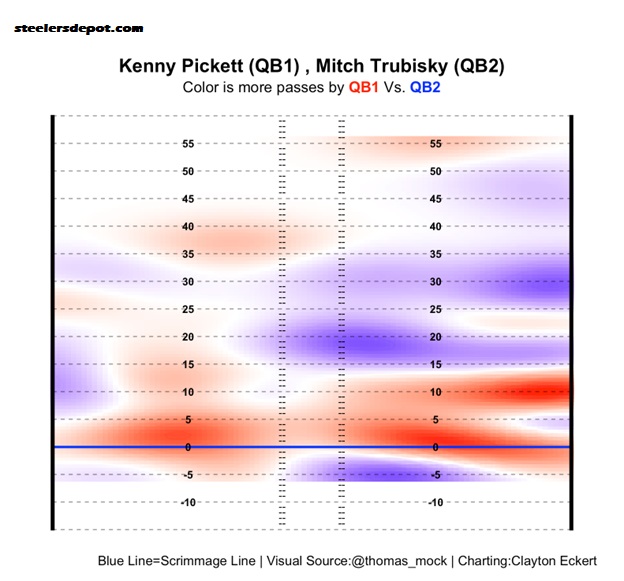 What are your thoughts on Pickett’s first career start? What about the quarterback comparisons thus far? How do you think Pickett will fare against the Bucs? Thanks for reading and let me know your thoughts in the comments!