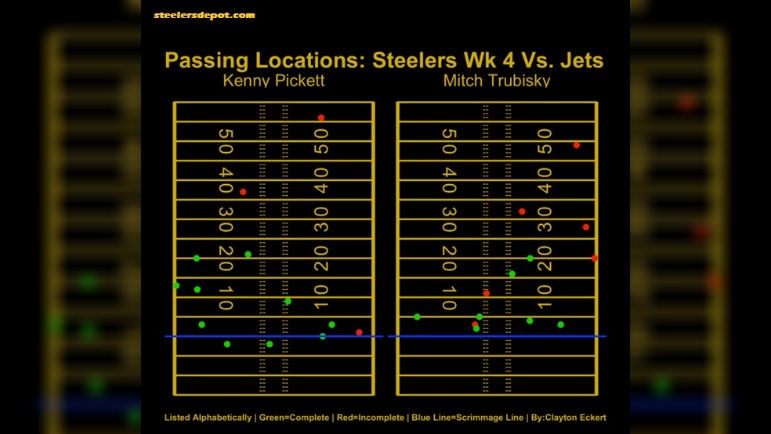 With week four in the books, it’s time to provide my quarterback passing locations charting for the game and the regular season thus far. In case you missed the previous articles, I will be charting, visualizing, and providing takeaways for the all-important quarterback position for the Pittsburgh Steelers. Thanks to Thomas Mock for his great article that helped me learn much of what I’m using today. Couple notes before we jump in. All yardage referenced are air yards from the line of scrimmage and bats at the line of scrimmage, spikes, and clear throwaways removed. This week’s charting has no removed passes, however.

Quarterback Mitch Trubisky played the first half, going 7/13 for 84 yards, no touchdowns, one interception that was tipped and off wide receiver Diontae Johnson’s hands, and taking three critical sacks, two of which came on inopportuned third downs. Kenny Pickett came in for his regular season debut for the second half, going 10/13 for 120 yards, no touchdowns or sacks, but his three incompletions were interceptions, two off of wide receiver Chase Claypool and tight end Pat Freiermuth’s hands, and the last on the final play hail mary for important context.

Let’s start with a simple view of the 26 total passes with number of throws and pass distances for week four: 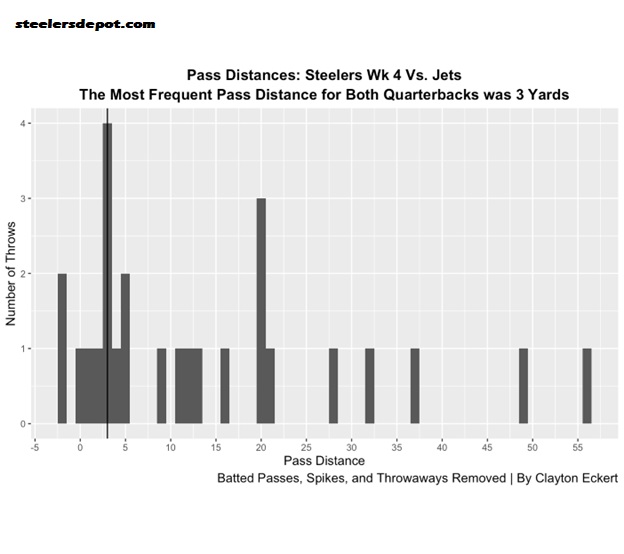 The most common pass distance overall was 0-5 yards as it is for most teams, at 38.5% including four passes of three yards. Trubisky’s throws at this distance were his interception (tipped by a dropping d-lineman then off Johnson’s hands) and a throw behind running back Jaylen Warren on a third down fail. Pickett’s were both completions, with the latter setting up a third and manageable conversion. 34.6% of passes were explosive (20+ yards), highlighting the gunslinging mentality in the game, but lacking connection (more on that in a bit). The third highest pass distance was 15-20 yards at 15.4%, a continued positive trend as the season has progressed and with more success than explosives. 11.5% of passes went 5-10 yards, along with the same percentage on 10-15 yard passes. The least common pass distance was behind the line, at only 7.7% compared to 14.4% through the first three weeks.

Since two quarterbacks played, and for additional context, here is a quick table for each player sorted by pass distances:

This is extremely telling as we add context to the first graph, with the top five pass distances being incompletions. 3/9 explosive pass attempts were completed, two from Pickett, both to wide receiver George Pickens including a great back shoulder throw and finding him wide open on the next to last play of the game. His three incompletions included two of his interceptions, the final play hail mary interception (an impressive 56 air yards) and one to Claypool off his hands. Hopefully this is not a trend on Pickett’s deep targets considering the context. Trubisky’s completion was a great throw over a defender to Freiermuth, but four incompletions were an early deep shot to Pickens batted away, the near touchdown to Johnson unable to get his second foot down in the back of the end zone, an overthrow under pressure on third and long, and an underthrow to Pickens.

One other quick takeaway was the third down passing, with Trubisky going 1/3 in these situations. The first was an early game conversion to Freiermuth in tight coverage, the second was the inaccurate throw to Warren mentioned earlier, and the final opportunity was the overthrow on third and long mentioned moments ago. Pickett’s throws (three) all went for conversions. Each were big time throws including the pass to Freiermuth, showing good poise in the pocket despite taking a big hit to set up one of his two rushing touchdowns, with the other two being strong throws/catches to Pickens, a connection and positive trend I’m hoping continues moving forward.

Here are the dots and heat map comparisons of the quarterbacks completions and incompletions for week four for more context: 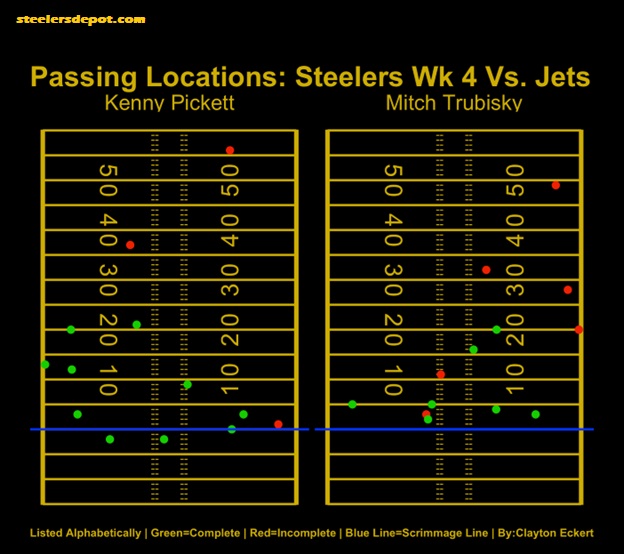 Here we get more context to the pass distances with the areas of the field the players targeted. Pickett favored the left side of the field, going 6/7 with the incompletion being the Claypool interception. Big takeaways for Trubisky were favoring the right side but only going 4/8 where all his explosive attempts traveled, along with going 2/7 past ten yards. He also threw a higher percentage of throws between the numbers compared to previous weeks, going 5/8 in that regard. While there were two double explosive attempts overall, one from each quarterback, here are the heat maps of all attempts, then for completions only for week four to highlight the stark difference: 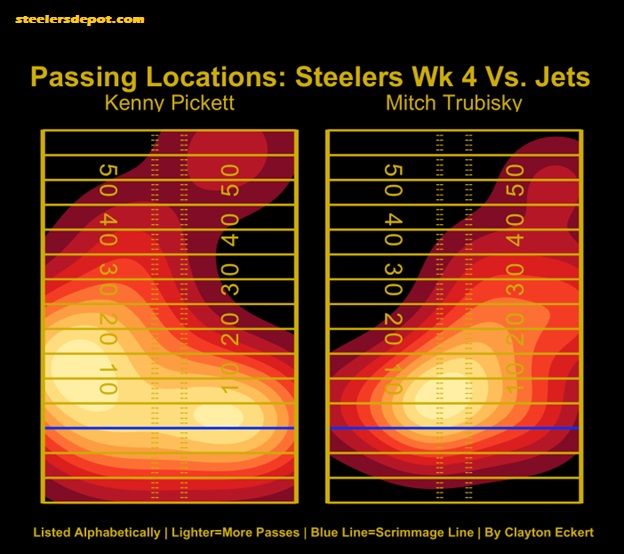 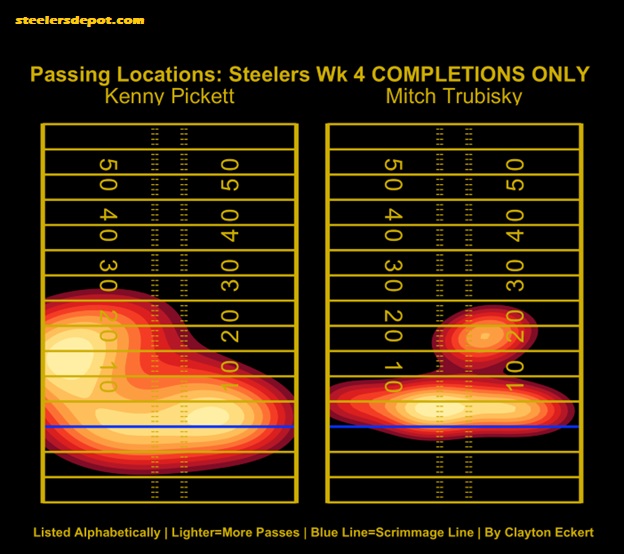 Quite the difference to say the least. While the reasons for the change at quarterback are above my pay grade, hopefully the breakdown of the types of passes and results shed light to the change at the position in this game, along with the previous articles.

Now let’s look at the total number of throws and pass distances for the 123 charted throws throughout the regular season: 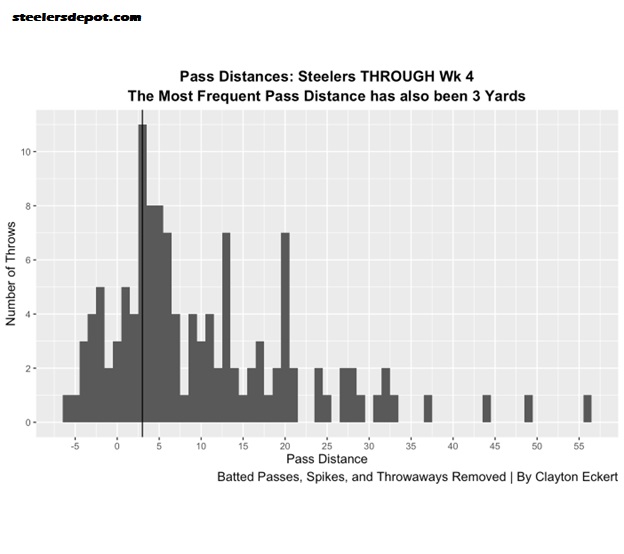 The most common pass distance on the season is still 0-5 yards, at 31.7% through four games. 22% of passes were 5-10 yards, for the second most common distance. Explosive attempts saw a big uptick in week four as highlighted earlier, at 20.3%. Would like to see more in the intermediate range, each taking a slight dip compared to the season numbers following week three: 15.4% 10-15 yards, 13% 15-20, along with the same percentage behind the line for the least common pass distances on the season thus far.

Many of you wanted additional context with great and appreciated responses to the last article, wanting to see how the Steelers pass distances compared to an established elite quarterback, so the timing felt appropriate to look at Bills quarterback Josh Allen considering he is the next challenge for Pittsburgh in week five: 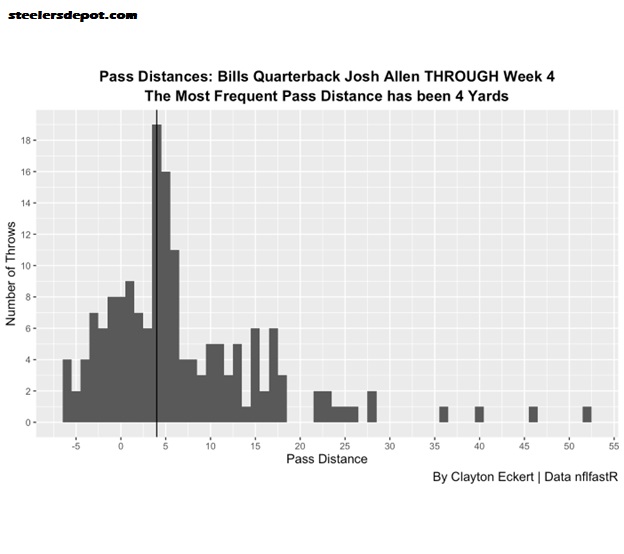 While Allen has 40+ more attempts, the most common pass distance is very similar. 38.9% of his passes have been form 0-5 yards which is over seven percent higher than Pittsburgh. The second most common distance for Allen was 5-10 yards at 25.7% (over 3% higher than the Steelers). Allen’s third most common pass distance is behind the line, at 18.6% which is 5.6% higher than the Steelers (tied for Pittsburgh’s least common range), and the first change in the most common pass range comparisons.  Pittsburgh and Allen have a similar percentage from 10-15 yards, with Allen at 15%. 10.2% of Allen’s passes have gone 15-20 yards, a mark that’s nearly three percent less than Pittsburgh. The biggest difference that may surprise is the huge discrepancy in explosives, with it being Allen’s least common distance at 7.8%, compared to Pittsburgh at 20.3 (12.5% higher)!  The big difference for Allen is quality over quantity, going 8/13 (61.5%) at this distance compared to Pittsburgh’s 8/25 for a low 32% according to my charting!

Shifting back to the Steelers passes, here are the dots for the regular season: 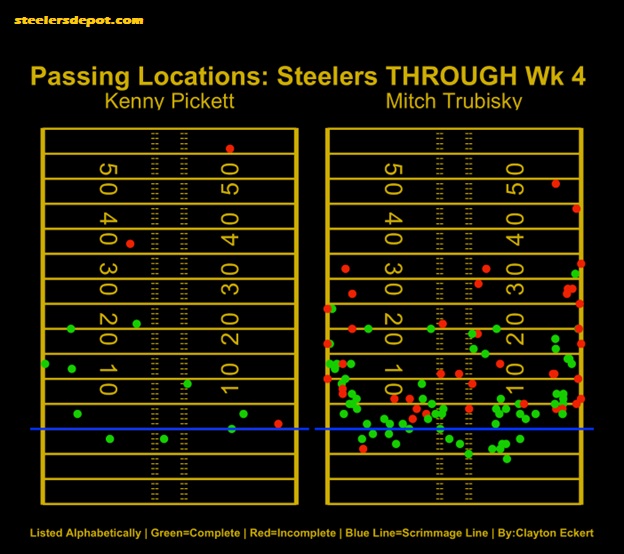 Piggybacking off the last thought, we can see Pickett was 50% on explosives on the small sample size. It will be interesting to see how he fares in the coming weeks, hopefully seeing his accuracy/completion rate continue as we saw in the preseason, especially considering the tough upcoming schedule.

The season heat maps will have to wait considering the sample size discrepancy, and I can’t wait to provide those as Pickett takes the rains moving forward.

To close, here is a comparison to hold us over (while still a low sample size for Pickett) gives an idea of the pass location comparisons for the season: 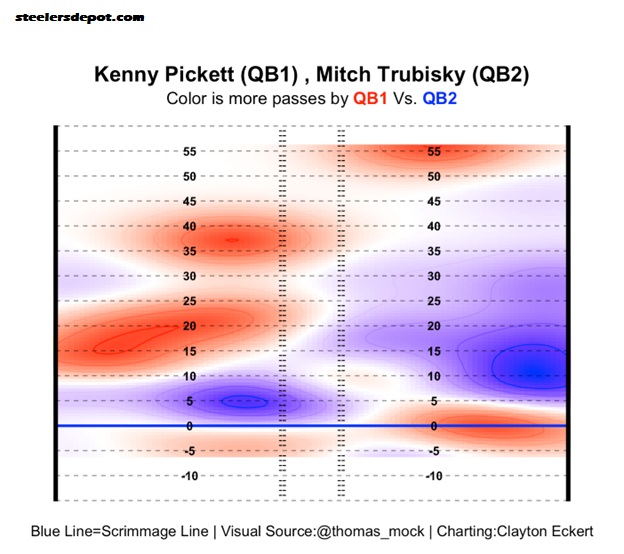