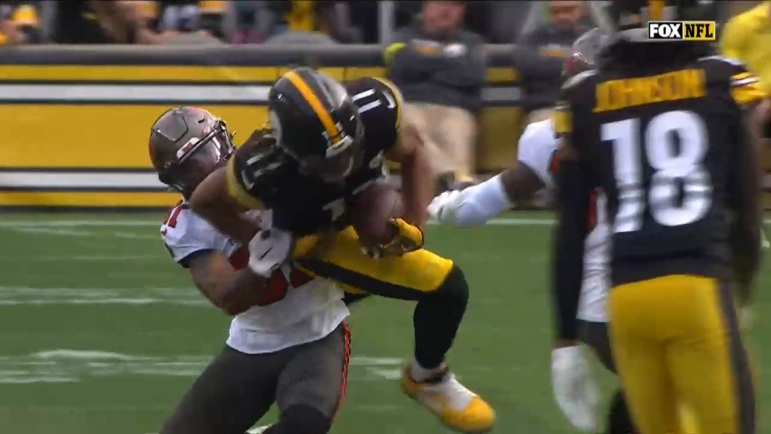 The Pittsburgh Steelers got some very crucial and very timely performances from maligned starters or former starters in Sunday’s win over the Tampa Bay Buccaneers. Of note was the play of third-year wide receiver Chase Claypool, who led the way with seven receptions for 96 yards and a touchdown in one of the strongest performances of his career.

While he has been receiving plenty of deserved praise for his play this week, that coming from his head coach has been of a somewhat more subdued nature since the game ended, and not without intention. “I just expect him to do great things”, head coach Mike Tomlin said in his pre-game press conference yesterday via the team’s website when asked about the tone of his comments about Claypool, “so that’s why it was that”.

A 2020 second-round pick, Claypool caught 62 passes for 873 yards and nine touchdowns, plus two more rushing scores, as a rookie. He took a step back last season, finishing with 59 receptions for 860 yards and just two touchdowns.

He had not gotten off to the hottest start this year, either. Through five games, he was sitting at 16 receptions for 129 yards and no touchdowns. He now has 23 receptions for 225 yards and a touchdown, trending in the right direction.

The question Tomlin was asked referenced not only his earlier remark in the press conference, but also his post-game comments, so we can revisit that as well. He did note on Tuesday Claypool’s “weighty-down playmaking”, but on Sunday was unwilling to engage in a line of questioning taking a broader view than the day on hand.

For his own part, Claypool also played it low-key speaking about his performance from the locker room that day. “I want to be the guy who can be counted on in those situations”, he said for himself. “Any time I get an opportunity, it’s an honor to make those plays, to have the opportunity”.

The good thing about the NFL is that there is always the next opportunity, whether good or bad, is just around the corner. For Claypool, his task is to show that this past Sunday wasn’t a one-off but rather what should be expected as his norm. That is, after all, how he views himself.