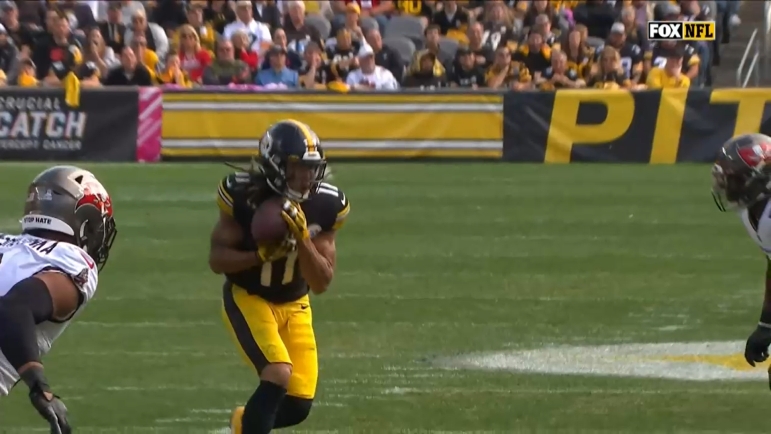 Mike Tomlin’s keeping today’s win in perspective. Not trying to make more out of it than it is. But it’s still a crucial victory. And wide receiver Chase Claypool played a major role in finishing and securing victory. Speaking to reporters after the game, Tomlin offered measured but still strong praise for Claypool’s performance

“He made some critical plays today,” Tomlin told reporters via the team’s YouTube channel. “We’re not trying to paint with a broad brush or show some trajectory. He made some plays today and I’m appreciative of it.”

Claypool led the way with seven receptions for 96 yards and a touchdown, the first end zone trip by a wide receiver this season. In one game, he nearly matched his season total of 129 yards across Weeks 1-5. His  biggest catches he made came late, three third-and-long moments. He had first down conversions on 3rd and 15, 3rd and 16, and 3rd and 11, the final one a great adjustment to make a sideline grab and stay in-bounds.

Claypool’s touchdown came on 2nd and goal, running a curl and securing the football. He became the first Steelers’ wide receiver to catch a touchdown pass this season, as Pittsburgh doubled their seasonal passing TD total today, going from two to four.

“To have those big catches…it makes [all the struggles] worth it,” Trubisky said after the game.

To this point, Claypool had looked largely uncomfortable in the slot and struggled this season, failing to cross the 50-yard mark in any one game this season. But he stepped up today, working well with backup QB Mitch Trubisky, and helped secure the win. Pittsburgh had struggled to finish out close games, losing to the Patriots, Jets, and Browns in that fashion. But they upset the Buccaneers in a well-played, 60-minute game.

Claypool will look to keep that momentum going next weekend against the Miami Dolphins. Though they’ve struggled and frustrated, Pittsburgh’s receiver room is still strong on paper. It could get stronger too with the addition of rookie WR Calvin Austin III, who will likely be activated prior to Week 7’s game.