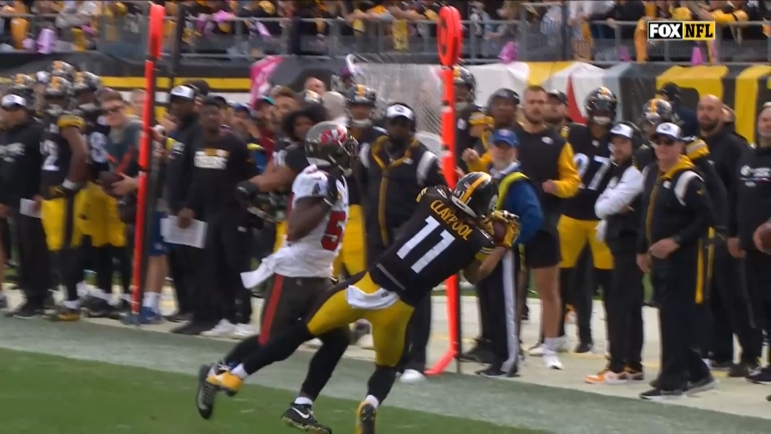 For the first time in his 37-game career in the NFL, Pittsburgh Steelers third-year wide receiver Chase Claypool seemingly put it all together on Sunday against the Tampa Bay Buccaneers in a Week 6 20-18 win at Acrisure Stadium.

With all the physical tools one could want in a wide receiver in today’s NFL — size, speed and strength — Claypool has seemingly struggled to put it all together on the field.

That all seemingly changed Sunday.

Claypool put it all together against he Buccaneers, finishing with seven catches for 96 yards and a touchdown — the first receiving touchdown of the year for any Steelers wide receiver. The third-year receiver made a number of key plays in the game, converting a handful of third-down conversions, including a third and 15 from backup quarterback Mitch Trubisky, and also had a sensational 26-yard back-shoulder catch down the left sideline on the final drive of the game, helping the Steelers drain the final 4:38 of game clock to seal the two-point win.

After the game, Claypool told reporters he wants to be the guy at receiver who can be counted on in those situations.

“I want to be the guy who can be counted on in those situations”, he told reporters in the locker room following his big day, via the team’s website. “Any time I get an opportunity, it’s an honor to make those plays, to have the opportunity”.

Chase Claypool caught all 7 of his targets Sunday. First time in his career he’s recorded a 100% catch rate on 5 or more receptions.

No catch bigger than this 3rd-down grab that helped sealed the Steelers’ win. Huge game for Claypool. pic.twitter.com/1tGFSTkoyD

For at least one week, he was that guy. His performance earned him a spot on Pro Football Focus’s list of surprise performances from Week 6.

Claypool’s performance was just one of three offensive pieces on the list, and the only receiver, showing just how great of a day the third-year receiver had in surprising fashion.

“Before Week 6, Claypool was among the most disappointing players in the NFL. Across his first five games, he was averaging just 8.06 yards per reception and had totaled only 129 yards. But he exploded in Week 6 against Tampa Bay, catching all seven of his targets — including two contested ones — for 96 yards,” PFF’s Marcus Mosher writes regarding Claypool’s performance. “He added eight rushing yards on the ground and was the most reliable offensive weapon for the Steelers.

“Claypool was also able to help Pittsburgh convert multiple third-and-10 or longer situations in the fourth quarter to hold off the Buccaneers in an upset win. He finished the game with an 86.7 grade, which is his highest since Week 5 of 2021. It was a much-needed performance from a player directly at a pivotal point in his career.”

After declaring himself a top three receiver in the NFL in the offseason, Claypool struggled to put things together through five weeks. As Mosher writes, he had just 129 yards receiving prior to the Week 6 matchup against the Buccaneers on just 16 receptions. He was at a crossroads and really needed to figure things out in a hurry.

For at least one week, he figured things out. Now, he needs to continue stacking strong performances and showcase the abilities and potential that he has at the position.