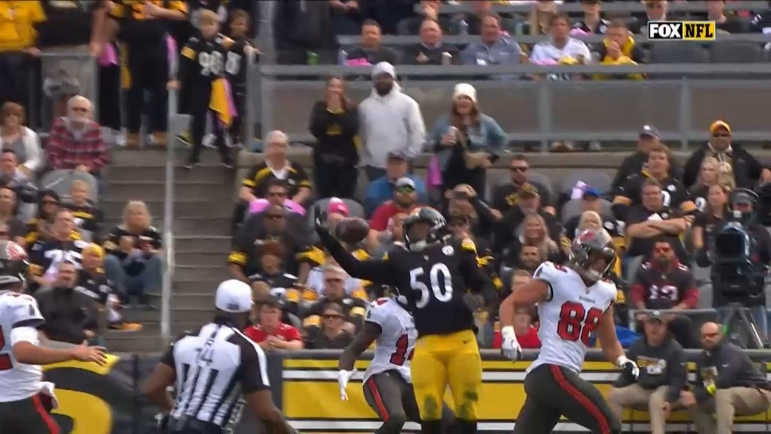 I’m not sure whether he is aware of it or not, but outside linebacker Malik Reed is still looking for his first sack as a member of the Pittsburgh Steelers. You wouldn’t know it by seeing the way he reacted to getting pressure on Tampa Bay Buccaneers quarterback Tom Brady on a play on which defensive lineman Cameron Heyward was credited with a full sack.

But regardless of what the stat sheet says, it was a good play from Reed, and part of a better overall performance, including a season-high five tackles and a pass defensed, now six games into his time in the Steel City since the team traded for him at the end of August. And it’s no surprise that he’s getting better as he gets more comfortable, which he attributes to “a combination of a few things”.

“Coming to a new place, new situation, it takes a little while to get it all down” was a big part of the transition coming over from the Denver Broncos, he told reporters via the team’s website. “Even the first few weeks, you’re not gonna have the whole defense down. You’re learning things from game to game. Teams you’re playing against and stuff like that”.

A former college free agent out of Nevada in 2019, Reed played a lot of football for the Broncos over the previous three seasons due to injuries to their starters at different times, Von Miller and Bradley Chubb. He logged nearly 2,000 snaps there, posting 15 career sacks with 123 tackles and three forced fumbles.

Denver was not necessarily rushing him out the door, though they were open to moving him because of the depth that they added this year, even saying that they were only going to trade him to a team that fit him like the Steelers.

Now that he has had nearly two months to adjust, to immerse himself into the defense, and most importantly to get on the field and play, we are starting to see that translate into a higher quality of snaps, his total now up to 248 on the season.

“I feel very comfortable right now and excited with where we are as a team”, Reed said about the state of the defense and where he is within it, “getting our footing up under us, getting that win last week, but we know that we gotta come ready to play each and every week”.

Of course, his role will change drastically when T.J. Watt returns from injury, having missed the past five games. I would imagine that the plan is for him to return after the bye week, but they have two more games to get through before then.