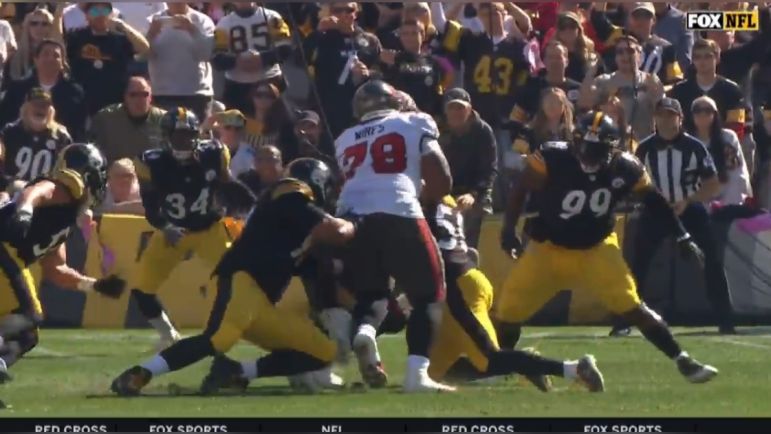 The Pittsburgh Steelers got what might have been their best pass rush production since Week 1 in their latest matchup against the Tampa Bay Buccaneers. The team’s pressure rate was 14%, but when they did get home, they made it count. One key pressure was a third and goal sack by defensive end Cameron Heyward, which linebacker Malik Reed’s bull rush on All-Pro tackle Tristan Wirfs was instrumental in creating.

When asked about his celebration after the sack, Reed highlighted sacking quarterback Tampa Bay Tom Brady as a career goal of his in a Wednesday interview.

“Brady, coming to the league, that was somebody that I said I always wanted to get,” Reed said when asked about his celebration after the pressure on Brady according to the team’s YouTube channel. “So, man having the opportunity to get that, you know what I’m saying? With this being his what, 22nd season or whatever it may be. We don’t know where he’s gonna end it. But being able to get to him was a huge thing for me personally. And so that’s why you got the reaction.”

It is easy to imagine that every young pass rusher has their eyes set on sacking Brady as a career goal. An undrafted free agent in 2019, Reed was traded to the Steelers from the Denver Broncos before the regular season to bolster outside linebacker depth. Reed is getting extended reps due to the injury to linebacker T.J. Watt, who the team is struggling to create pressure without. This Heyward sack, which arguably would not have happened if it wasn’t for Reed, marked one of several key Steelers red-zone stops on Tampa Bay, which proved crucial to the game’s outcome. Reed’s bull rush was especially impressive given that it came against the aforementioned Wirfs, who is undeniably the Buccaneers’ best offensive lineman.

The Steelers, knock on wood, will likely only need Reed to start the next two games before Watt returns after the bye week. Outside linebacker depth was an issue coming into this season, which Reed was traded for to address. This issue ranges back to last season, as the team did not have adequate depth behind Alex Highsmith and T.J. Watt following the departure of Melvin Ingram. While Watt and Highsmith are plenty capable starters, depth is crucial, as the team is learning the hard way.

The Steelers’ pass rush is their bread and butter on defense, as they have led or co-led the league in sacks for the past five seasons. The injury to Watt remains a key part of their defensive struggles, which they finally appeared to figure out against Brady and the Buccaneers. As the team prepares to face the high-powered Miami Dolphins offense with the return of quarterback Tua Tagovailoa, they will need every bit of pass rush from Reed and company that they can get to keep the game in hand.