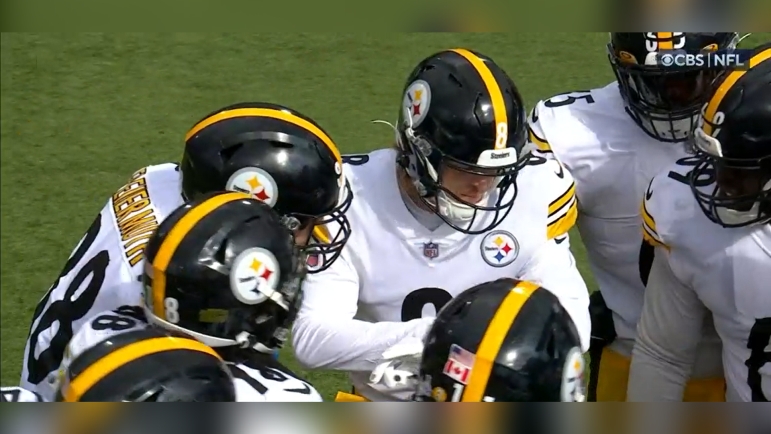 The Pittsburgh Steelers are coming off an 18-year tenure with quarterback Ben Roethlisberger. Among the many things that the team is missing as a result is his locker room leadership, as he undoubtedly earned the respect of his teammates as a result of his many accolades as a Steeler. As the Steelers enter a new era, the presumed heir to Roethlisberger in Kenny Pickett is hoped to match this type of leadership. Pickett was asked about whether guys in the locker room are following him on Wednesday as the team prepares for the Tampa Bay Buccaneers.

“I don’t take stock in what’s going on,” Pickett said according to a transcript provided by the team. “I just kind of have a feel for what we need and go as we need to go and what I feel like we need as a team. We have some great veteran leadership. We’re all working together. We’re all working towards the same thing. It’s not just me; I think the entire offensive room as a whole does a great job. Tae [Diontae Johnson] and Chase [Claypool] and we’ve got young guys following those guys in the receiver room. It’s a group effort and I think we’re heading in the right direction, but we’ve got to produce on Sunday.”

This response is ideal for Pickett, as differing to a team-focused answer is the best way to avoid unwanted headlines. Outside of the rare physical measurable and work ethic that it takes, being an NFL quarterback requires an innate ability for leadership. No position in sports is arguably as significant to a team’s success as a quarterback is in football, especially in the NFL. Walking into a locker room as a rookie, especially in one that is accustomed to veteran quarterback leadership, is a tall task.

As Pickett stated last week, his intended leadership style is done by reading the room and matching its needs. This is something that his predecessor Roethlisberger had to learn throughout his career. As an older rookie that led a Pitt team to its best season since 1981, Pickett appears to have what it takes to be a leader.

So far, it is hard to ask much more of the rookie quarterback as far as locker room leadership. Dating back to training camp, many of his teammates have praised his comfortability in his role, and Tomlin stated that his natural leadership that the team observed in their draft process contributed to the team’s decision to draft him.

Following a narrow loss to the Buffalo Bills in his first start, it is easy for Pickett to be discouraged. Time will tell whether his leadership will be effective in the locker room, but as of now, it certainly appears that he has the respect of his teammates.