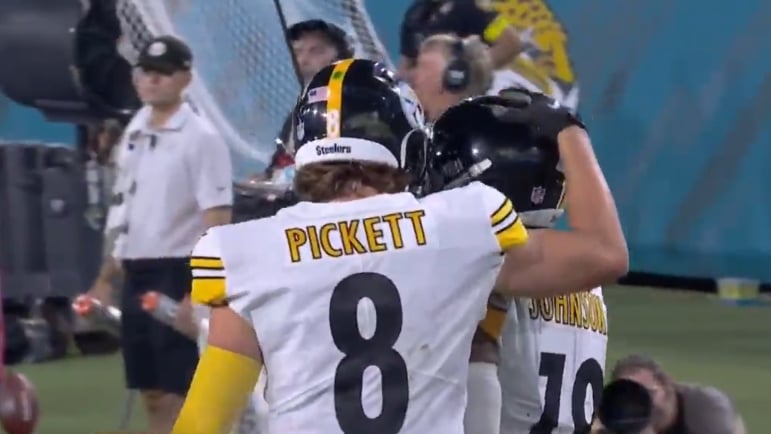 Being the starting quarterback of a football team is about more than just being a position player, especially at the NFL. It’s a unique position that requires a certain level of leadership for the unit around him to succeed, and that’s especially true for less proven and less talented offenses. Some quarterbacks simply seem to have those innate qualities that help make the players around him better. Others don’t.

Perhaps there’s no truly nice way of saying this, but nothing in the first three and a half games of the season showed indications that Mitch Trubisky was that type of quarterback. For as much as all of his teammates talked about believing in him and having his back, the results on the field didn’t show that. We saw more of that in the 30 minutes of Kenny Pickett’s debut on Sunday. And it’s not by coincidence. It’s intentional.

“I don’t like to get too high or too low. I know I show some emotion out there. On Sunday, I felt like we needed it”, he told reporters yesterday via the team’s website when he was asked about how he provides a ‘spark’ to the team. “It’s really reading the room, read the situation and fit the kind of leadership style that needs to be fit. That’s really what I’ll take from it and be myself on Sunday”.

Part of being a leader is knowing what your followers need and figuring out how to give it to them. That’s something that Pickett’s predecessor, Ben Roethlisberger, had to learn over the course of his career when his role within the team changed, but when the time came for him to take on that role, he embraced it.

For Pickett, it’s always been a part of him on the field, and it’s always been required, but that doesn’t mean he hasn’t nurtured it over the years. After all, he is a bit of an older rookie, and so has a bit more of an accumulated playing maturity than most, but the point is, you can see it. It’s a role he understands and knows how to play.

“I want to raise the level of play of everyone around me, but we have so many great players and I’ve got to do my job”, he said. “I have 100 percent trust and confidence that every single guy in the huddle will do their job. I think that everybody was just raised that way. So, everyone’s just got to own their business, own their job and we’ll be alright”.

The Steelers didn’t come out of his debut with a win, but they did exit Sunday’s game with some justifications for cautious optimism, both for the immediate and foreseeable future.

There was a palpable difference in the fluidity with which the offense moved the ball during the game. And that was after he was told that he would be playing at halftime in the locker room. We haven’t even seen what an actual Kenny Pickett gameplan looks like yet.