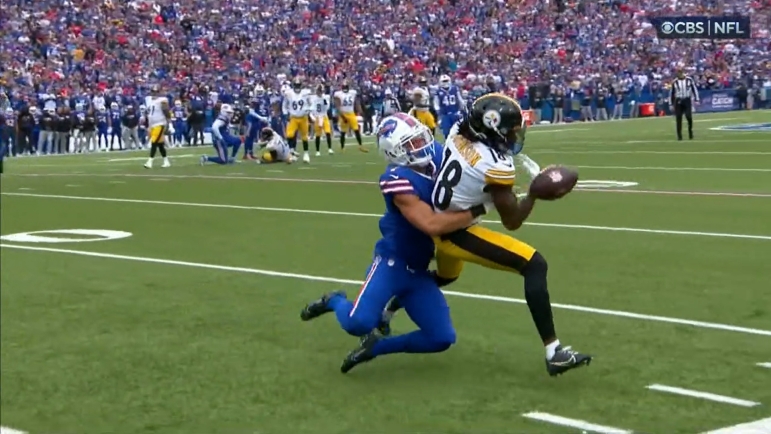 After a 38-3 loss to bring their record to 1-4, I can’t imagine a lot of members of the Pittsburgh Steelers are as optimistic and carefree as they would be before Week 1. Wide receiver Diontae Johnson told the press today that he’s frustrated and he hopes his teammates are as well.

He also added that it’s not the game plan, and guys have to make plays.

“I mean, it ain’t the game plans, it’s us, we just gotta play, man. Just put it on film. Just make the plays and the rest of it will come with it. And like I said, we haven’t been doing that and I’m not making no excuses, we gotta just play better all around.”

No one is blameless through five weeks. Everybody has to pick it up and play better, but Johnson is one of a few guys who really need to put a better performance on tape. He had two key drops yesterday, which is an aspect of his game he’s struggled with. While it’s something he’s really worked to improve, the drop issue is rearing its ugly head again in 2022. And it’s something that’s really costing Pittsburgh. He had a ball bounce off his hands and go for an interception against the Jets, and he had a ball go through his hands on third down yesterday that should’ve been picked. Credit Taron Johnson for making a good play on the ball, but he also had a fourth down drop in the red zone that killed Pittsburgh’s drive yesterday.

Johnson gets unfairly criticized at times, but so far he hasn’t looked the part of a No. 1 receiver, and that’s what he was paid to be. Fair or not, when a team rewards you with a new contract and you underperform, there’s going to be criticism. Granted, it’s only been five games, it’s not as if Johnson has been playing with a Pro Bowl quarterback, and it’s not like he’s been awful. His catch in Week 1 against the Bengals is a big reason why Pittsburgh isn’t 0-5 or 0-4-1, and he’s had at least five catches in every game except the Jets game, when he logged just two catches for 11 yards.

All around, the offense has to be better. The change to Kenny Pickett seems to be a good decision because the offense is moving the ball more than they did with Mitch Trubisky under center, but the results still aren’t there. I mean, this team has seven touchdowns in five games. That’s not going to ever result in winning football. Taysom Hill had four touchdowns by himself for the New Orleans Saints yesterday, which would account for over half of Pittsburgh’s touchdowns on the season. As Johnson said, everyone has to step it up and begin putting it on tape. They have to play better, and they’ll look to do so on Sunday at Acrisure Stadium against the Tampa Bay Buccaneers.