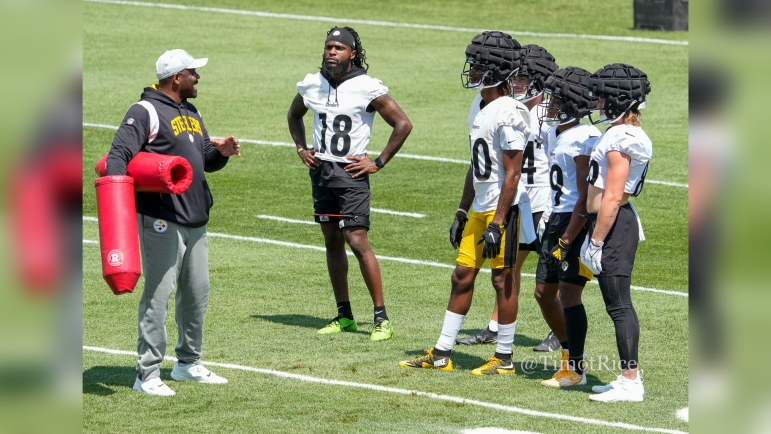 Three years into his NFL career, Pittsburgh Steelers standout wide receiver Diontae Johnson has steadily improved his game as a former third-round pick out of Toledo, from his overall route running to his shiftiness after the catch, but most importantly to his hands and consistency.

After struggling through a 2020 season that saw him record a career-high 13 drops along with a 9.0% drop rate, Johnson put in the work ahead of the 2021 season, focusing on catching tennis balls and really homing in on his hand-eye coordination, leading to a career season in which he hauled in 107 passes for 1,161 yards and eight touchdowns to go along with a career-low five drops.

That success in 2021 led to the Steelers eventually handing him a two-year extension through 2024 with a pay raise in 2022 last week, taking the star receiver off the market for at least two more seasons, locking down a key figure on the Steelers offense.

Now, with a new contract in hand and his future solidified, Johnson is looking to raise his game to the next level, though he’ll have to do that with two new quarterbacks in the fold in Mitch Trubisky and Kenny Pickett, as well as Mason Rudolph, who is competing in a three-way competition for the starting job in the post-Ben Roethlisberger era.

Never one to settle, Johnson is working hard to continue improving, though he told reporters there’s not one set area of this game that he’s focusing on specifically, according to video via Steelers.com.

“Just working on the same things I’ve been working on on the daily, catching the ball, looking it in, run after, you know, around more, route running and stuff like that,” Johnson said to reporters Monday prior to practice at Latrobe Memorial Stadium, according to video via Steelers.com. “…You can’t really just focus on one thing because you can get better at every aspect of your game. That’s what I tend to focus on the whole, my whole aspect of my game. I try to work on everything, not just one thing.”

That mindset and overall work ethic has led Johnson to where he is today in the game: one of the 20 best receivers in football overall. Though the hands remain a bit of a question mark considering how he closed the 2021 season with some drops issues, Johnson remains one of the very best route runners in the NFL, consistently creates significant separation and handles the workload of a true No. 1 receiver quite well.

Having secured a sizable contract, a lot of attention will be on Johnson to see if he can live up to the top billing for the Steelers with the changes under center. With his work ethic, the Steelers shouldn’t be concerned one bit, regardless of who is under center.