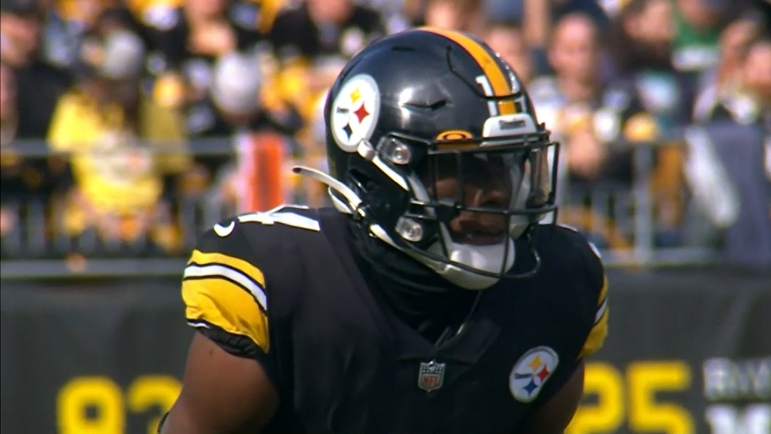 While there is not much to smile about as a Pittsburgh Steelers fan, one positive in recent weeks is the emergence of second-round draft pick receiver George Pickens. Since fellow rookie Kenny Pickett came into the game at quarterback in the second half against the New York Jets, Pickens seemingly flipped the switch. In a Tuesday article by Pro Football Focus that ranked the top 15 rookies, author Michael Renner is jumping on the Pickens hype train, ranking him as the 12th-best rookie.

“Pickens has arrived,” Renner wrote. “After 102 yards last week, he racked up 83 yards on six catches against the Bills in Week 5. All six of those receptions resulted in first downs. The rapport he already has built with quarterback Kenny Pickett is evident.”

Being ranked as the 12th-best rookie and third-best rookie receiver is not bad for a second-round selection. If the rapport between Pickett and his fellow rookie is indeed what he needed to unlock his potential, then Pickens is only getting started.

In training camp, there were a plethora of reports highlighting Pickens’ confidence and raw talent. Pickens being a second-round selection is not the full story behind his draft profile, as teams recognized his talent, but chose to avoid him due to injury and character concerns. In picking him 52nd overall, it was no doubt that Pittsburgh got a steal in terms of talent, and this may just be the onset of a great rookie season.

The receiver group for Pittsburgh this season is not living up to expectations. Not catching a touchdown in the first five games of an NFL season is far less than ideal, especially for a group that many believed had ample depth and talent. Pickens’ fellow starting receivers Diontae Johnson and Chase Claypool are having underwhelming seasons, the former not playing as the team hope from a recently resigned and presumed top receiver and the latter not fully utilizing his measurables. Two plays that come to mind are Johnson’s costly drop against the Bills and Claypool’s inability to box out his smaller defender against the Jets.

Granted, this is not solely on the receiver room, as many factors such as quarterback play and play-calling play a role in this. Still, even with the change in quarterback, the offense only scored three points and Pickens was the team’s leading receiver.

The verdict is still out on Pickens, and there was some evidence to suggest that his play still needs improvement. That said, he does appear to be turning a corner with Pickett, and the team will certainly need him to against Tom Brady and the Tampa Bay Buccaneers.