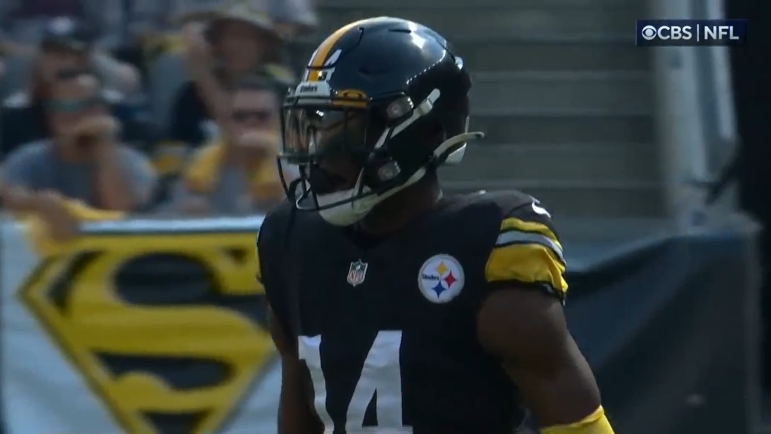 The other day, we noted that analytically speaking, Diontae Johnson is among the most open receivers in football. Hidden at the end of that ESPN article were the least open receivers. And there was a Steeler among that group, too. George Pickens was named the next-to-last open receiver in the league with a score of just 28, only ahead of fellow rookie Jahan Dotson.

“On the other end of the rookie spectrum are Washington‘s Jahan Dotson (34 overall) and Pittsburgh‘s George Pickens (35). Open Score has been the concern for each, with Dotson at 21 and Pickens at 28, the two worst among all qualifiers.”

So the two have the worst overall receiver scores and the two lowest “open” scores, which measures how much separation a player is getting. At least for Pickens there’s a bit of space between his number and Dotson’s, 28 to 21. Still, it’s a discouraging number. It’s certainly a contrast to Pickens’ belief he’s open “90%” of the time.

Though analytics can get bogged down in their inherent wonkiness, the tape backs up the data. As our Tyler Wise pointed out, Pickens’ route running could use plenty of work, and he hasn’t created much space. His route tree has largely been limited to sight adjustments, running vertically or breaking down underneath against soft coverage. Those issues aren’t new and are things we wrote about back in the summer, mentioning it through all the summer hype he was generating.

Here’ what we wrote in late August.

“There’s flaws in his game that get masked by all the highlight-reel stuff. He needs to create more separation on his intermediate routes, needs to be a more technical route runner and getting the correct depth (something Coach Jackson was on him about throughout the summer) and his release package could use work, too. He’s still a bit raw around the edges, expected for a 21 year old underclassman who barely played last season.”

Pickens’ overall ability isn’t in question, his ceiling is sky-high, but there’s plenty for him to improve on. It is worth mentioning Pickens’ overall running style is pretty unique. He’s a long strider and glider and there are times on tape where it looks like he’s barely running. But he has a pretty uncanny ability to effortlessly out-run cornerbacks. I remember one rep during camp, a 1v1 drill against Ahkello Witherspoon, where Pickens in what felt like a jog easily stacked and burned Witherspoon, who runs in the 4.4’s. There have been players throughout history who have had their effort questioned because of their gliding style, and Pickens may fall into a similar boat.

So far, Pickens best plays have come contested and he excels there more often than most. It’s a little counter-intuitive, but he’s at his best when he doesn’t appear to be open. At least, that’s what he’s shown through his brief NFL career. Pittsburgh needs to find more ways to get the ball into his hands. But Pickens also has to progress, refine, and improve his game. As usual, there’s a level of nuance to the conversation and here, both sides – player and team – have work to do.