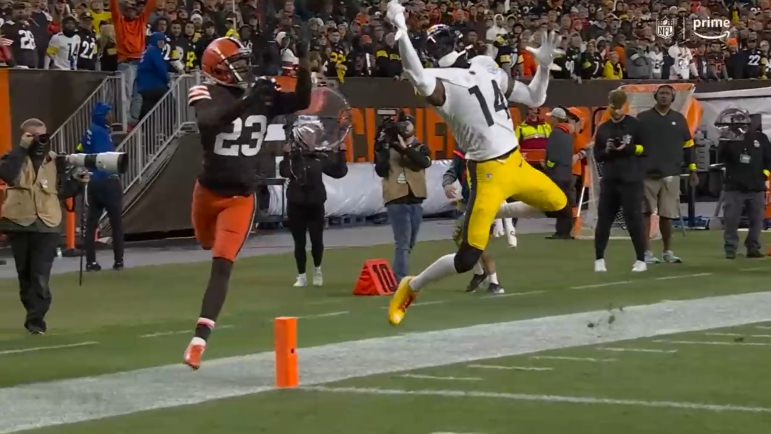 Understandably, Pittsburgh Steelers rookie wide receiver, George Pickens, has been a crowd favorite since being drafted by the team in April. From his draft day reaction, which turned into a meme, to highlight catches and pancakes through training camp, preseason, and now the regular season, it’s easy to see why he gets the fanfare. Now, with a struggling Pittsburgh offense, fans and receivers alike are getting frustrated about the usage of their playmakers, in particular Pickens. While I do think Pickens should be getting involved more in the offense, I wanted to take a look at some reasons why he might not be getting some of the opportunities fans think he deserves.

Wide receiver is one of the tougher positions to adjust to when transitioning from college to the pros, outside of the rarities of Ja’Marr Chase and Justin Jefferson, many take a year or two before making a big jump in their output. In many cases, it’s due intricacies of the position. There are numerous minute details that receivers must know from learning a new offense, to reading defenses pre and post-snap, to being on the same page as the QB, to hot routes, to fine-tuning their route running, etc. To be a consistently good wide receiver in the NFL, it’s no longer just going out there and being a better athlete than the guy lined up across from you, you have to be the better football player.

For that, I wanted to take a look past memes and spectacular catches, to give you a breakdown of what George Pickens put on tape in the Browns game and what he needs to improve on moving forward.

The first thing I want to look at is how Pickens runs his go-routes. With a large portion of Pickens’ route-distribution through three games coming on go-routes, it’s a pretty important one for him to run correctly. During the preseason, I posted a few clips of how he was coasting on them and not showing any real effort to try to vertically stack the defenders.

George Pickens has obviously been good. My biggest gripe with him, thru one game & some camp clips, is coasting on 9-routes.

I'm not sure if he thinks he'll outrun his QBs' arm or he's just confident in his contested catch ability, but you have legit 4.4 speed, use it. #Steelers pic.twitter.com/aM9qqw4sEy

Unfortunately, it hasn’t been coached up yet, or Pickens hasn’t taken to the coaching, as we saw it show up again in week three. Let’s take a look.

On the Steelers’ final possession, which ended in a field goal, Trubisky wanted to take a shot to Pickens at the bottom of the screen. He runs directly to the sidelines, pinning himself between the defender and the boundary. Not only that, but he also begins to power down around the 15-yard line. Doing this gives the quarterback essentially nowhere to throw the football. James Washington was a huge defender of this last season.

To finish the play, it also looks to me like Pickens timed it up and wanted it to be another spectacular one-handed grab like he had in the first half. Trubisky put this in a place where Pickens could make a play. That’s all you can ask for from your quarterback on take-a-shot throws down the sideline. I would have liked to see Pickens attack this with two hands at its highest point. I recognize it’s not an easy play, but it is one we know he can make. This is a low-effort rep, in my opinion.

And as our own, Josh Carney, pointed out on Twitter this is likely why you can see Wide Receivers Coach, Frisman Jackson, getting on Pickens after the play.

Charting that as a drop, Pickens had two more that I would count as drops in this game. One drop came when he started leaning too early on the sidelines, the ball ricocheting off his hands, and another on a curl that he lets slip through while trying to cradle it to his chest.

Coming out of Georgia, he was charted for 2 drops on 92 career targets, and one of the lowest drop rates in this year’s draft class. I’m a harsher grader when it comes to drops than most, but it’s never good when you have more in one game than all of college. I’m not predicting this will be a trend, but something to keep an eye on.

Now let’s take a look at some of Pickens’ route-running. It’s something that Alex Kozora pointed to in training camp in terms of something he needs to hone in on, and now that we get to see the tape, I don’t disagree.

Below, Pickens is in the slot, running a corner route. Where I want you to focus is at the top of the route. There’s no lean inside, no head fake, no bam step exploding out of his break. What it becomes is a slow banana cut that is easily coverable by this defender.

Ultimately, Pickens is playing too high and that is going to make these cuts a lot harder than if he was running with a low center of gravity. The other thing to notice is Pickens has little to no knee drive when he runs. This creates short choppy steps instead of using his long strides to eat up space. All-in-all, it ends up looking like he’s jogging. I know he can play faster than this.

To give you an idea of a wide receiver that has strong knee drive and what it can do, not just off the line of scrimmage, but also in helping explode in and out of cuts, here’s a great video from Receiver School focusing on Calvin Ridley. His knee drive naturally is going to create that “bam step” when he goes to cut which ultimately leads to more explosiveness.

The depth of Pickens’ route-running is also something I’ve taken notice of through the preseason into the regular season.

Below, is a mirrored route concept with both outside receivers running deep stop routes. All things considered, the routes should look similar with similar depths. Pickens breaks this off five yards shorter than Diontae Johnson. These types of plays are all about timing and landmarks, the quarterback should know exactly where you’ll be on a play like this. I can see a one or two yard difference in route depths, but five yards is a drastic difference on a timing pattern.

All teams are different, but a lot run these types of routes off of steps rather than yardage (two-step slant, three-step out, five-step out, seven-step post, etc.). Going off this, it seems this is a nine-step stop route on the outside. This furthers the case about Pickens needing to have more knee drive and striding out in his route-running. There’s no way a 5’10” receiver should be getting five more yards of depth than a 6’3″ receiver on a nine-step route. He also gets away with a two-hand push-off, but as someone with “#AlwaysCommitOPI” in his Twitter bio, I won’t get on him about that. Do it until they call it.

In the next clip we have, I’m not sure exactly what this route is. I’ve been a wide receiver and studied them almost my whole life. I can’t say this is a route I’ve seen before. It looks like a sluggo, possibly, but then turns into a speed out and Pickens just sits down like a hook.

I’ve never seen another Steelers wide receiver run this before either so we’ll chart this as an ad-lib for Pickens. The number one rule as a receiver is don’t confuse the quarterback. I think Pickens may have broken that rule here as the play ends as a check-down to Najee Harris.

Here’s the last clip we’ll look at on Pickens. Lined up at the bottom of the screen the Steelers are running a zone-read with Mitch Trubisky. Pickens knows it’s man coverage and is looking to do a run-off. “Running off” a cornerback is an effective blocking technique against man coverage because their focus is on the WR. Therefore you just run downfield and they’ll follow, effectively taking them out of the play. Doubling down on that, the best technique is then to then do a “throw by” and lock up that cornerback blocking-wise. However, Pickens starts his release, but never actually does his run-off, assuming it’s going to be a run up the middle. Trubiksy pulls the ball and is lucky he doesn’t get his head taken off by the cornerback that should have been nowhere near the play.

Do not take this article as George Pickens is a bad player and never will be good.  He has the makings and the talent to be a superstar in this league. It’s super early in his career, with only three real NFL games under his belt and naturally, as with any rookie, there’s going to be a lot of room to grow.

Sometimes, it’s important to take a step back from the highlight/meme plays and the “99% of the time, I’m open” quotes to see where a guy is at as a complete football player. Personally, I’m excited to see him grow through this season and beyond. As of right now, he’s still the super raw wide receiver with only 92 career college targets that we saw coming out of Georgia, and that’s okay.

The benchmark has now been set.

What are your thoughts on how George Pickens has looked so far in the 2022 season? Let me know in the comments!