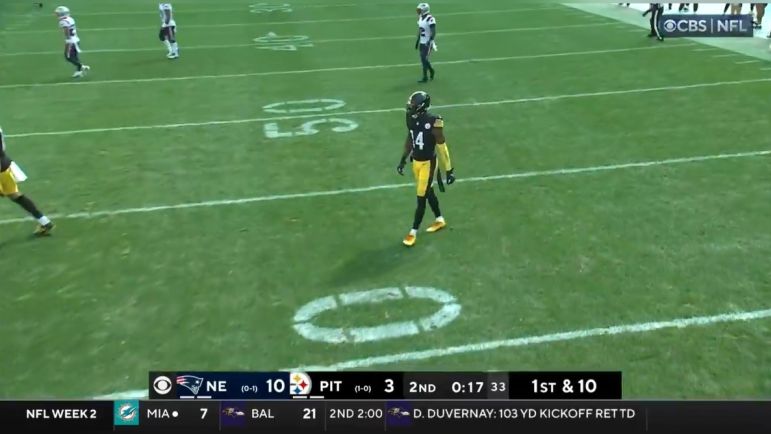 After a sensational training camp and preseason showing from rookie second-round wide receiver George Pickens, the hype surrounding the former Georgia Bulldogs’ star was rather large and loud entering the 2022 regular season.

Then, it all came crashing down, causing some frustration for not only Pickens himself, but the fan base and the media around the Steelers.

Through two games, Pickens has just two catches for 26 yards on six total targets. Without the lack of a deep threat or usage from Pickens, the Steelers’ offense has been downright dreadful through two weeks, scoring just two total offensive touchdowns on the season while also failing to crack 300 total yards in a game to this point.

Oftentimes Pickens could be seen on the All-22 open or in favorable matchups. Steelers head coach Mike Tomlin stated during his Monday press conference that the Steelers could do a better job of taking advantage of one-on-one matchups in games, undoubtedly referring to Pickens.

The rookie took it a step further Tuesday from inside the locker room at the UPMC Rooney Sports Complex, stating to reporters he feels like he’s open roughly 90% of the time in the last two games, and that he’s open as soon as he gets off the line. Of course, that’s a bit of an exaggeration and every talented wide receiver believes he’s always open as soon as he steps onto the field.

That said, it’s a bit telling that Pickens felt comfortable saying this to the media in an effort to potentially get a message across to his quarterback and offensive coordinator in Mitch Trubisky and Matt Canada, respectively.

“I just say that because I’m a big guy that runs in the low 4.4s,” Pickens said to reporters, according to original reporting from the Pittsburgh Tribune-Review’s Joe Rutter. “I always have a step on somebody and my step is naturally longer than the other person, and I’m actually fast.

“I’m always (going to) have a step and always feel like 99% of the time I’m open even though the ball gets there in the air and (the defender) gets time to catch back up,” Pickens added. “…But I’m open as soon as I get off the line.”

George Pickens says he feels as if all the WRs are getting open pic.twitter.com/Qrvi3Ln5bz

Well then. Talk about being pretty straightforward and confident.

Through two games, Pickens has been on the field for 78% of the snaps, so it’s pretty darn concerning he has just six targets overall in the passing game on a total of 71 passing attempts through the two weeks of game action.

He’s a big guy that runs fast and can stretch defenses vertically. He’s very good at making plays in the air through contact and has elite-level body control. He needs to have the football thrown his way, even if he’s not completely open or as open as Trubisky feels comfortable when cutting it loose.

Pickens is no doubt exaggerating, but there is certainly a hint of frustration in his voice when talking about how open he believed he was not only in the loss to the New England Patriots, but on the season as a whole. We’ll see if anything changes starting in Week 3 against the Cleveland Browns on Thursday Night Football.