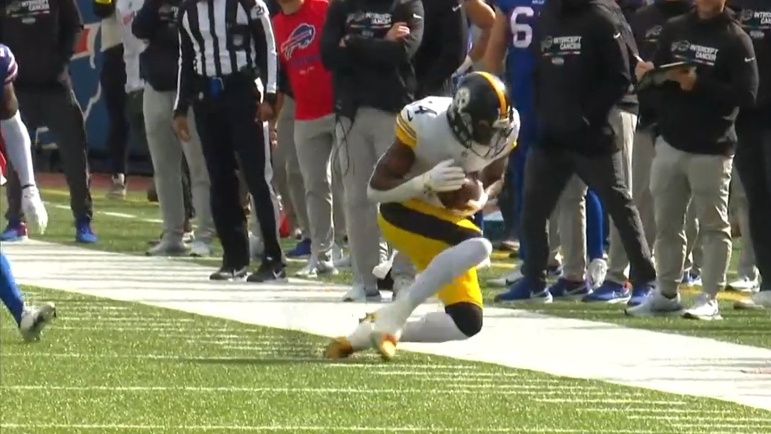 The Pittsburgh Steelers got throttled by the Buffalo Bills Sunday afternoon by a score of 38-3. The defense couldn’t stop a nosebleed in this one as they surrendered over 550 total yards of offense to Josh Allen and a dynamic Bills offense that let off the gas after taking a 31-3 lead at the half. The offense wasn’t any more inspiring as they struggled mightily on the ground and failed to convert in the red zone, settling for field goals when even K Chris Boswell had a rough outing, converting 1-of-3 field goal attempts.

However, one bright spot for the Pittsburgh Steelers in this game was rookie WR George Pickens who continues to impress with the opportunity presented to him. Coming off a 102-yard performance against the Jets, Pickens followed up his best game as a pro with six catches on eight targets for 83 yards. He again led the Steelers in receiving for a second-straight week and finished third in targets to Diontae Johnson (13) and Chase Claypool (9).

When going back through the tape, you see Pickens’ crazy contested catch ability again pop off the screen like we’ve seen throughout training camp, preseason, and the first four weeks of the regular season. His size, leaping ability, and body control allow him to make some impressive catches in the air while also having the strength to battle through contested coverage to come down with the ball. We see this on his long reception on the day of 29 yards where he gets an outside release on first round CB #24 Kaiir Elam and manages to come back to the ball on the back shoulder throw, snagging it at the apex while boxing out Elam from behind and secures the catch

If you could believe it, that wasn’t even Pickens best catch of the day. That came on this play he made that was ruled incomplete since he got one foot and one hand down in-bounds rather than two feet. Regardless of the ruling of the play, watch Pickens work from the slot here at the top of the screen and run the corner route to the sideline, leaving the ground to get full extension for the pass from Pickett. Pickens snags the pass out of the air and manages to stick one toe down and attempts to break his fall with his hand rather than dragging his second toe down, resulting in the incomplete pass.

Here is a zoomed-in view of the play where you can see Pickens’ concentration on the football while in flight, seeing the ball in through the catch point and tries to get down in-bounds while momentum carries him out.

Now it wasn’t all goes and slot fades for Pickens in this game. While his route tree did take a step back after being featured all over the field last week against the Jets, we saw Pickens make plenty of plays on possession downs, working near the sideline as he would come back to the football and turn up field in attempt to pick up first downs. Here are a few off the catches Pickens made Sunday on come backs and curl routes near the chains where he did benefit from soft coverage by defenders, but still managed to move the sticks for the offense.

One thing you continue to see from Pickens is his effort after the catch to pick up extra yards. While not possessing blazing speed of lightning quickness, Pickens has some shimmy to his game and is more than willing to put his shoulder down to gain an extra yard or two. Watch this extra effort by Pickens after the catch as he brings in the out route and turns up field, fighting through the arm tackle of Elam to extend for the marker and move the chains for the first down.

If you want to see an effort play by Pickens, watch this rep where he catches a low pass thrown by Pickett, keeping the ball from hitting the turf. He looks for the first down marker as the defense converges on him, torpedoing his shoulder into #30 Dane Jackson as he extends forward to cross the line before getting drilled by #4 Jaquan Johnson out of bounds.

That physicality by Pickens is seen in his contested catches, run after the catch, and his blocking which have become as renowned on Twitter as his highlight reel grabs. It’s become custom to see Pickens put at least one DB on his backside a week and Dane Jackson earned that honor in Week 5 as Pickens blows him up at the LOS to get off the press at the bottom of your screen.

While George Pickens didn’t lead the Steelers in targets, he was again arguably the team’s best receiver for a second-straight week. He did benefit from Buffalo playing off coverage for most of the second half, but in all fairness, Pickens was targeted only four times in the second half with two of those targets falling incomplete. One “incompletion” came on that circus catch he tried to make on the sideline and the other on a throwaway by Pickett.

Diontae Johnson commanded the most targets for Pittsburgh, but was far less efficient, bringing in five of his 13 targets for 60 yards including a couple of bad drops. The drops look to be plaguing Johnson again this season after seemingly getting a hold of the issue last season. This isn’t to say that Pickens has surpassed Johnson as WR1 in Pittsburgh, but should this trend continue where Pickens leads the team in receiving and is more consistent at converting his targets into receptions, at what point shouldn’t he become the target leader in the passing game.

There is no denying that George Pickens has plenty of room to grow in terms of route running and separation from a technical standpoint, but he is flashing the traits of a WR1 already five games into his rookie season. For a Steelers team that doesn’t have much optimism as they continue the 2022 season, Pickens is providing a bright spot with immediate returns as well as the tantalizing upside of what he can become alongside Kenny Pickett for hopefully brighter days ahead.

What are your thoughts on George Pickens’ performance against the Bills? Do you think he is coming along strong five games into his rookie season? Should he potentially challenge Diontae Johnson for WR1 status in Pittsburgh by the season’s end? Please leave your thoughts in the comments section below and thanks again for reading!