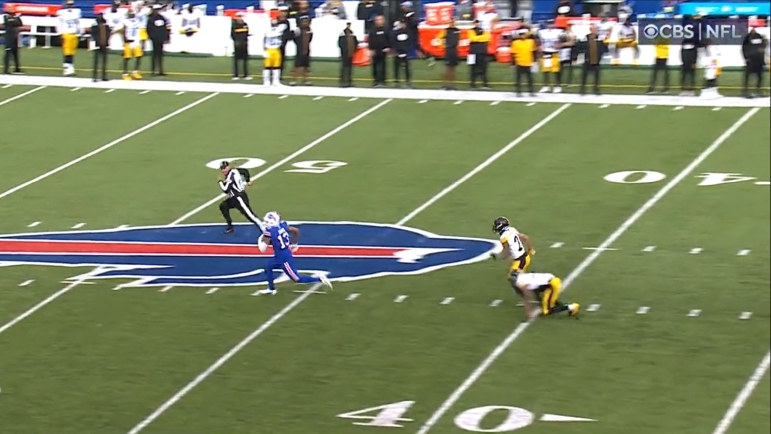 Teryl Austin isn’t happy with the results. But he isn’t going to change his philosophy. Speaking to reporters Thursday, Austin said he’ll remain aggressive even after allowing two long touchdowns to the Buffalo Bills in a blowout loss Sunday.

“I think we’re always going to try and do what we think is best,” he said, as tweeted by The Trib’s Chris Adamski. “Give ourselves the best chance to stop people. Obviously it didn’t work out there.”

Steelers DC Teryl Austin said that getting burned on a 98-yd TD while blitzing won’t make him gun shy to be aggressive going forward pic.twitter.com/kONwWBtuZ1

Austin was specifically referring to Gabe Davis’ 98-yard touchdown on the third offensive play of the game. Facing 3rd and 10 from their own two, Allen found Davis running behind CB Levi Wallace and S Tre Norwood for the score, the longest Pittsburgh’s allowed through the air since 1966. The Steelers attempted to bracket both outside receivers, but Norwood lacked depth while Wallace lacked the speed to turn and run.

Davis followed that up with a 62-yard touchdown later in the half.

As we predicted, the Steelers came out with an aggressive gameplan against the Bills. In their 2021 matchup, they blitzed Buffalo only 13% of the time. Sunday, they blitzed a whopping 62.5% of the time, including on that touchdown, a five-man rush with Minkah Fitzpatrick on a coffeehouse/delayed blitz. Though the overall gameplan failed, Austin said it won’t deter him going forward.

Pittsburgh will quickly have to get it right starting this weekend against Tampa Bay. Tom Brady has always been the Steelers’ kryptonite, 12-3 against Pittsburgh over his career, regular season and postseason, and the Bucs’ offense comes into this game a bit healthier at the skill positions. Wide receivers Mike Evans and Chris Godwin have battled injury this year but are healthier now, while veteran Julio Jones has been in and out of the lineup and has a chance to play this weekend.

Austin’s approach against Brady this weekend will be interesting to watch. While Brady lacks mobility, the Steelers seem more likely to drop seven and play coverage as opposed to beating him. Brady gets the ball out so quickly, a league-quickest 2.4 seconds, that sending extra people would be futile. Still, getting pressure on Brady is key, and without T.J. Watt, the Steelers haven’t shown they can get to the quarterback.