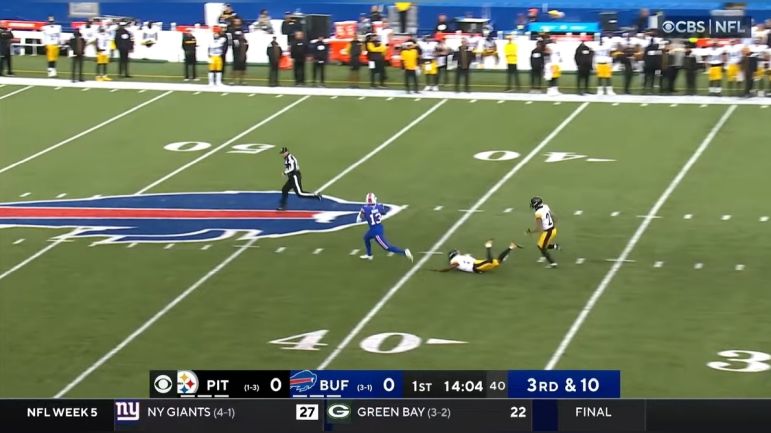 The Buffalo Bills put up 38 points on the Pittsburgh Steelers Sunday. They could’ve put up 50.

Really, they only needed seven.

The only high moment of Sunday’s loss came on the opening kickoff. A stark contrast to last year’s 75-yard return to open the 2021 season, Bills’ return man Taiwan Jones- fumbled Chris Boswell’s boot and struggled to secure the ball. Pittsburgh’s coverage team pounced, Tre Norwood making the tackle at the two. On first down, DeMarvin Leal batted down Josh Allen’s pass. On second down, Cam Heyward and Myles Jack stuffed RB Devin Singletary at the line.

Two plays in, so far, so good. Get off the field on third down, have great field position, it’s hard to start the game any better than that.

But that’s why Buffalo is so good. They change the tenor of a game in an instant. Dropping back on 3rd and 10, Allen uncorked one down the left side, hitting speedy Gabe Davis in stride. He did the rest and found the end zone, a 98-yard TD, the longest the Steelers have allowed since 1966. That’s before Chuck Noll arrived.

Steelers come out in a pressure look and an amoeba defense, a 1-4-6 looks, with just one defensive lineman, #99 Larry Ogunjobi with four linebackers and six DBs, a variation of their dime defense. James Pierre coming in with Cam Sutton bumping to the slot. Minkah Fitzpatrick is rolled up near the LOS with Arthur Maulet and Tre Norwood playing safety. Interestingly, both safeties are playing very shallow, basically at the sticks. Here’s the pre-snap look. 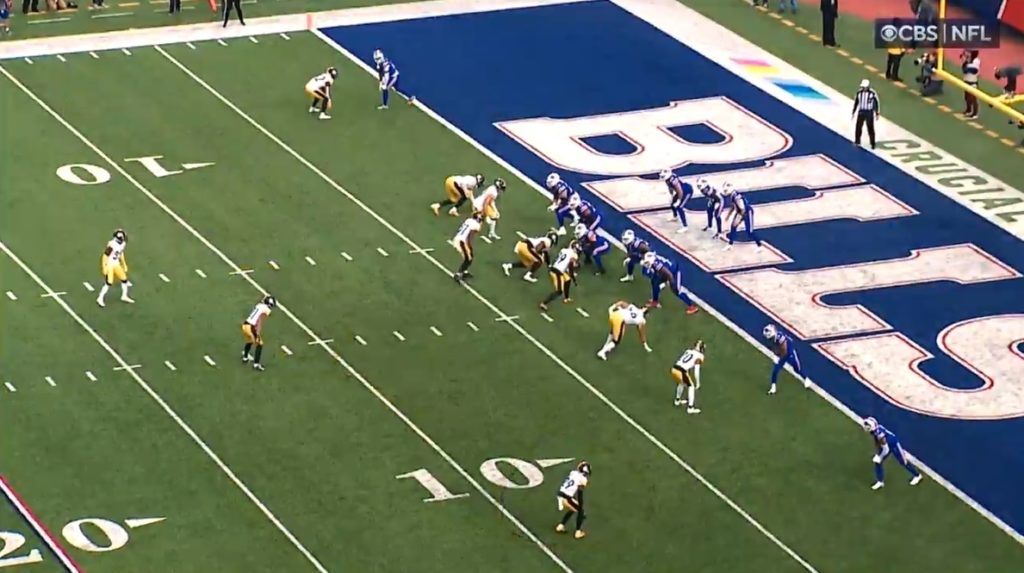 I assume that’s in an effort to disguise coverage. Not tip their hand to Allen what the Steelers might be running. Cover 4? Rotation that becomes Cover 1? And Pittsburgh’s trying to hold that look as long as possible so Allen can’t adjust his read before the ball is snapped.

Having Fitzpatrick at the LOS is a…choice. Guessing that’s to basically spy and contain Allen, something the Steelers routinely did Sunday. Match him if and when Allen breaks contain while trying to rob anything shallow or quick along the way. Here, he spies and then rushes on a delayed blitz once Allen sets up shop in the pocket.

Coverage-wise, I’d call this Nick Saban’s “55.” Double-bracket of both receivers, Saban designates it as the two most dangerous threats, while everyone else plays man. Here’s 55 drawn up courtesy of Cameron Solan via Throw Deep publishing. 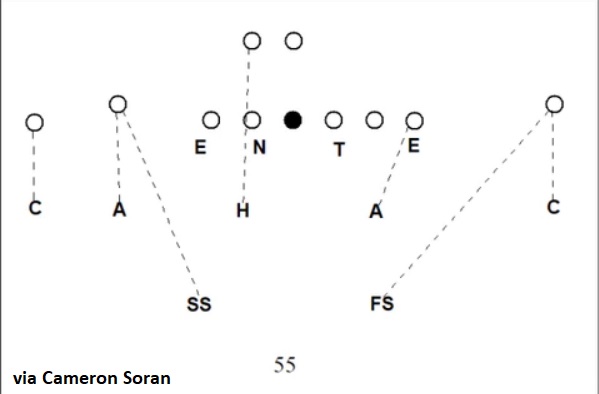 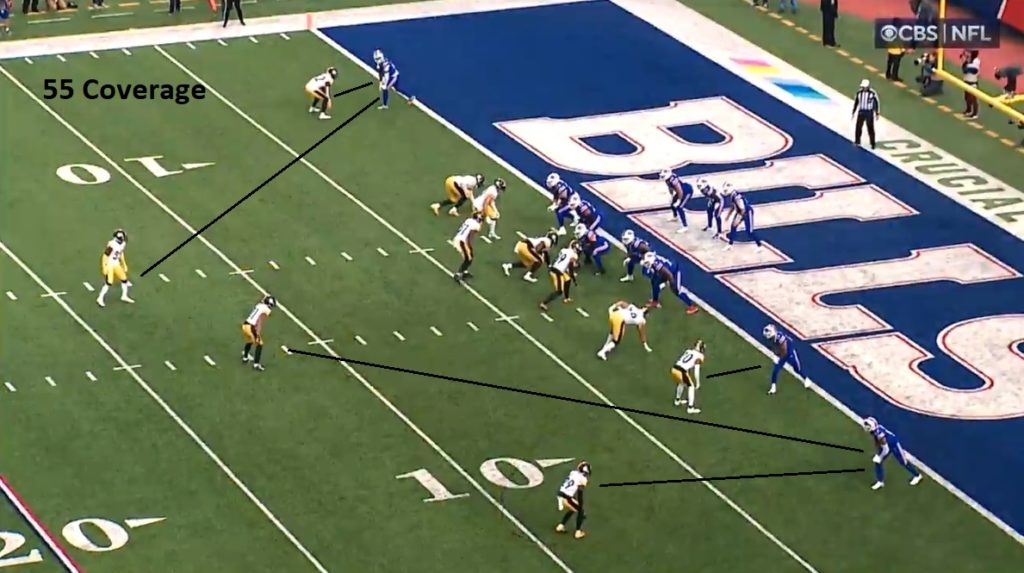 But with both safeties so shallow, they’re trailing the vertical releases the Bills’ outside receivers run. Sight adjustment to the top with the receiver not stacking the cornerback and converting his route to a comeback/backshoulder play. But Davis to the bottom has the speed and free release to burn Wallace. I wouldn’t say Wallace is late opening his hips but against a guy like Davis, perhaps the league’s top deep threat, you want to open your hips sooner than later. With Norwood having no depth and a less-than-stellar angle, he’s of no help over the top.

Davis burns them both, Wallace dives and misses, and Norwood has no chance of tracking him down. Touchdown.

Davis’ second score is a little harder to evaluate without seeing the aerial All-22. We did get this end zone/dot view from the broadcast. Tight splits with the Steelers in single high playing Cover 3.

Josh Allen does a great job to hold Fitzpatrick in the middle of the field before looking right and hitting Davis down the seam. Fitzpatrick doesn’t do a bad job, utilizing a speed turn to get into phase, and has good coverage. But he’s unable to finish the play, doesn’t wrestle the ball away from Davis, and ultimately how you finish the rep is the only thing that matters. 62 yard touchdown.

That’s going to be charged to Fitzpatrick, and certainly hurt his sterling QB rating against, but a tip of the cap to the Bills. They’re Super Bowl favorites for a reason. And they showed no matter the circumstances, the down, distance, or line of scrimmage, they can pour it on.

That’s what they and the Kansas City Chiefs do better than any team in the league. They can flip the switch and pour points on in a quarter, taking a competitive game and making it a laugher. By the end of the first quarter, it was just 10-3. By halftime, it was 31-3. Game over. Davis was just the start of a very long day.