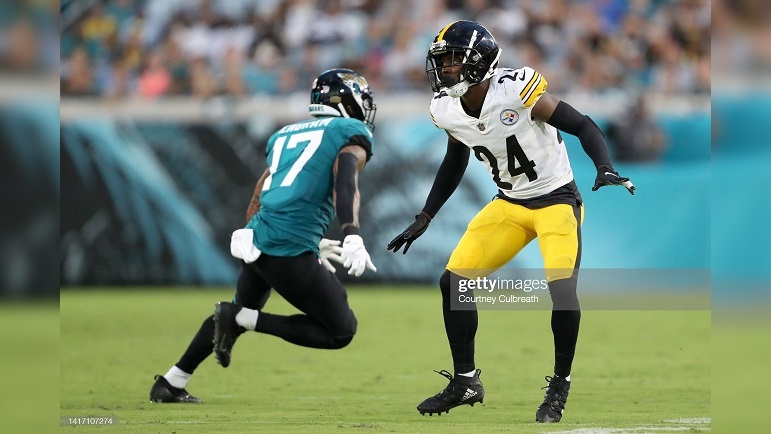 The Pittsburgh Steelers are now beginning to prepare to play the Miami Dolphins on Sunday night following the team’s stunning home upset over the Tampa Bay Buccaneers. With the start of Week 7 of the 2022 regular season now almost upon us, it will be interesting to see if the team opens yet another 21-window on a player currently on the Reserve/Injured list. More specifically, safety Damontae Kazee could be a player that resumes practicing this week.

Damontae Kazee was in the Steelers facility today. Eligible to come off IR and suspension is over. Could practice this week

According to Chris Adamski of the Pittsburgh Tribune-Review on Monday, Kazee, who was removed the suspended list last Monday, was back in the team’s locker room earlier in the day. He still remains on the Reserve/Injured list, however, and he’s been there since the start of the regular season.

Kazee, who signed a one-year contract with the Steelers during the offseason, is looking likely to return soon from an arm/wrist injury suffered during the team’s preseason finale. If the team opens his 21-day practice window this week as a designated-to-return player, that transaction would likely be announced on Wednesday. If Kazee’s window is opened, the team would then have 21-days to put him back on their active 53-man roster.

Kazee was injured on August 28 and had surgery performed soon after. During preseason action for the Steelers, Kazee registered 13 total tackles on defense with one resulting in lost yardage. He also was credited with one special teams tackle. Including special teams action Kazee logged 93 total snaps during the preseason.

Last Tuesday, Tomlin was not asked to comment on Kazee being removed from the superseded list. With the veteran safety now back in the locker room on Monday, it will be interesting to see if the Steelers’ head coach is asked about the player on Tuesday during his weekly press conference.

In addition to being on the lookout for Kazee news this week, we’ll wait patiently to see if this is the week that rookie wide receiver Calvin Austin III is finally activated to the 53-man roster. Austin had his 21-day practice window opened on October 5. If the Steelers want him to make his NFL debut against the Dolphins on Sunday night, he will need to be activated from the Reserve/Injured list by Saturday at 4:00 p.m. ET.