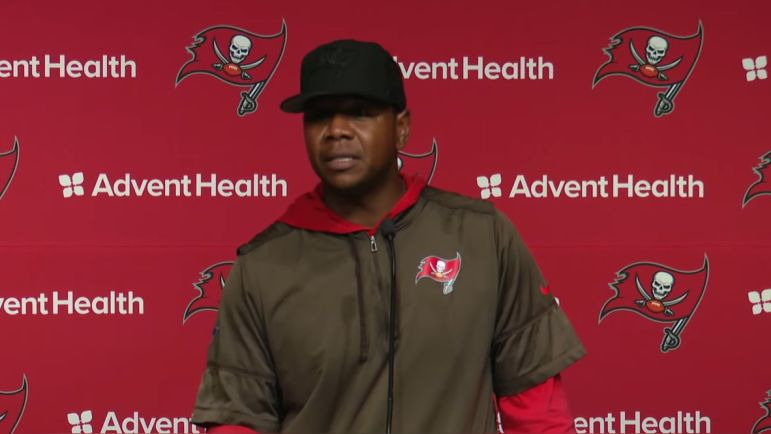 The Pittsburgh Steelers are preparing to face the Tampa Bay Buccaneers in Week 6 to try to avoid a dreadful 1-5 start. In doing so, they will face many familiar faces for the franchise on the opposing coaching staff, including former linebacker Larry Foote and current co-defensive coordinator for Tampa Bay, and former Steelers’ offensive coordinator Bruce Arians and current Senior Football Consultant, among many others. Among those names is Byron Leftwich, a former first-round pick that backed up longtime Steelers’ quarterback Ben Roethlisberger in 2008 and again in 2012-2013, also starting one game in 2012.

For the Steelers, this matchup is not particularly favorable on paper. From facing six-time Super Bowl Champion quarterback Tom Brady to playing another game without reigning Defensive Player of the Year T.J. Watt, Sunday will be a challenge. When asked about Watt, Leftwich, the current Buccaneers’ offensive coordinator, had high praise.

“Any time that caliber a player is not on the grass it’s different,” Leftwich said in a Thursday press conference. “Obviously, as a competitor, you always want to go against the best, but he’s a unique player. He’s one of the best in the world. What I love about him is that he makes timely plays. It’s not just plays, it’s timely plays.”

The infamous stat of the Steelers not having won a game without Watt is only growing, as the losing streak extended to eight after the team played without him in the recent loss to the Buffalo Bills. Barring his injury, Watt would likely be facing Pro Bowl Buccaneers tackle Tristan Wirfs, a great matchup on paper.

As the Steelers continue to search for ways to replace Watt schematically, they are using a 3-3-5 defense with more reps for rookie defensive end DeMarvin Leal. Creating pressure against Brady, who is not having his best season, is the key to keeping this game low scoring. That is, according to Pro Football Focus, Brady has a woeful 51.9 passer rating when pressured, and 104.3 when kept clean.

Timely plays in key parts of the game are indeed one of the countless things that set the reigning DPoY apart from the pack. One play that comes to mind is the overtime strip-sack on Seattle Seahawks quarterback Geno Smith in the 2021 season, which essentially won the team that game. In a quarterback- and offense-dominant league, a defensive player routinely making game-winning plays is unheard of.

The fact is, the 2022 Buccaneers have relied on their defense to win games, having only surpassed 21 points once in a catch-up effort against the Kansas City Chiefs. If history tells us anything, it’s that Brady is bound to turn it around at some point. If the Steelers can’t find a way to adequately replace Watt and get the pass rush to some approximation of what it was with him, it may get ugly fast.