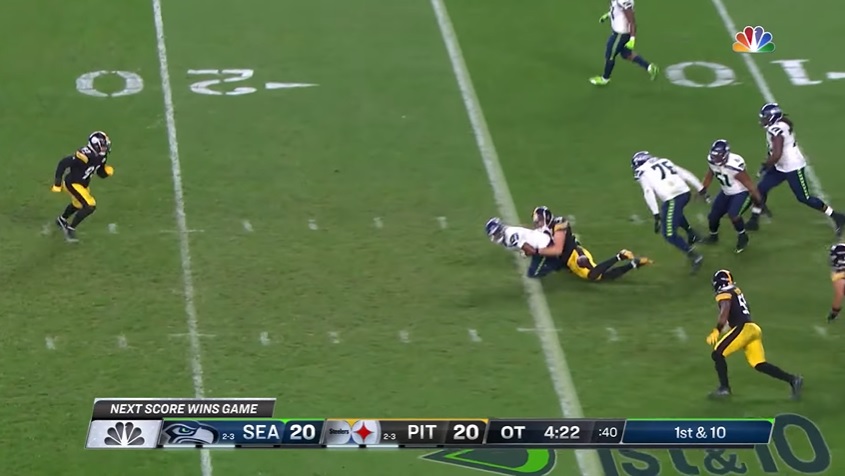 In the biggest moments of the Pittsburgh Steelers’ overtime win on Sunday Night Football against the Seattle Seahawks, All-Pro edge rusher T.J. Watt came through to help his team get the stops it needed. On the Seahawks’ first drive of overtime, with the ball on Pittsburgh’s side of the field, Watt made the sack on third down to force a punt. And then, in a signature play for his career, Watt came through with a strip-sack on Seattle quarterback Geno Smith on the first play of Seattle’s next drive.

That sack, coming inside the Seattle 15-yard line, allowed Pittsburgh to simply run kicker Chris Boswell out for a game-winning field goal and the 23-20 victory to move to 3-3 this season. It was another chance for Watt to make a big play late and help directly lead to a win for his team, and it’s a moment Watt knows he should enjoy, getting the chance to do something every defender hopes to have the opportunity to do in a game as close as Sunday night’s.

“I think every defensive player does,” he told reporters post-game. “And if you don’t have that mindset, then you shouldn’t be putting the cleats on and playing football. As a defensive player, that’s why I love defense. And that’s why I welcomed the switch in college, just cause you can make a play on any given down,” said Watt, who referenced his roots as a tight end recruit at the University of Wisconsin before his coaches flipped him to edge rusher. “That’s how I feel every single Sunday that we tale the field and towards the end of the game, you know that as a pass rusher, when they have to throw the ball or even in rundowns, you can affect every single play. And that’s just what I’m trying to do every time I’m out there.”

Those two OT sacks were part of an impressive day for the NFL’s highest-paid defensive player. In addition to them and the forced fumble on his second one, Watt had three tackles for a loss, made seven tackles total, and defensed three of Smith’s passes.

His effort helped set the tone for the Steelers’ pass rush, and attract extra attention from the Seattle blocking and free up room for his teammates to work. Joining Watt with big plays for Pittsburgh were Alex Highsmith (1.5), Cameron Heyward (one), and Chris Wormley (0.5) with sacks, with the former two also making a pair of tackles for loss, and the latter defensing one pass at the line.

Even with extra attention Watt still made plays. As detailed in this tweet, on the play where Watt strip-sacked Smith and set up Boswell’s game-winning field goal, Seattle had at least three players over defending against his pass rush, only for Watt to circle back and connect with Smith as the Seattle QB stepped forward in the pocket to try and run it.

Those types of plays are why the Steelers made Watt the highest-paid defender in NFL history, and he is doing everything in his power to earn that contract. In five games, Watt has 21 tackles, seven sacks, three forced fumbles, and a fumble recovered so far this season. He is tied for the league lead in sacks with Cleveland’s Myles Garrett, and shares the league lead in forced fumbles with three other players.