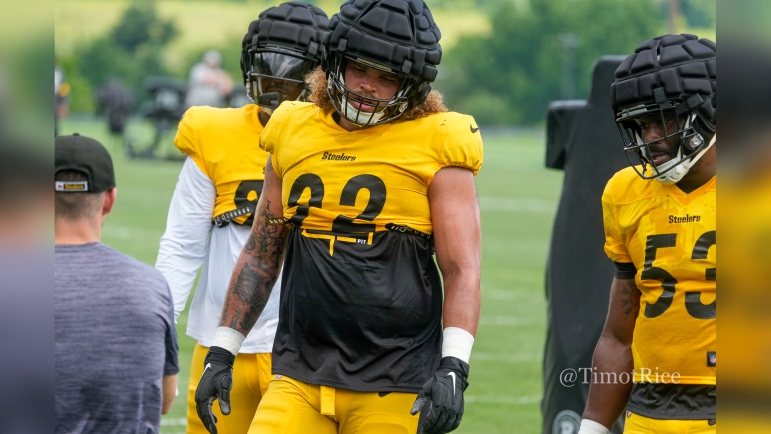 Reasoning: Although he has not yet dressed this season, nor has there been any direct indication that he will dress on Sunday, Isaiahh Loudermilk is reportedly now over a lingering rib injury that he suffered in mid-August and which apparently lasted longer than anticipated, and according to Gerry Dulac, the team does have plans to use him rather than him remaining a scratch (evidently not a fully ‘healthy’ one) at some point this year.

The Pittsburgh Steelers have an unusually deep defensive line room this season after rostering seven players, one more than is typical for a 3-4 defense. At this through the first three games, they have dressed six of the seven (traditionally dressing five of six), even though none are prominently playing on special teams.

And of the seven, second-year Isaiahh Loudermilk has been the odd man out. But for how much longer? While there is reason to question his accuracy rate, Gerry Dulac of the Pittsburgh Post-Gazette has recently indicated that the young lineman took a while to come all the way back from a rib injury, and that, now healed, he is still in the Steelers’ on-field plans this year.

Rib injuries are of a kind that can linger, as we saw with Alex Highsmith, who missed most of training camp and the preseason due to one, yet he currently leads the NFL in sacks. With the team deep along the defensive line, the coaches surely felt no rush to push Loudermilk, giving him time to fully heal.

It should be noted, at least, that he has never appeared on the injury report this season, which means that he has at least been going through full practices, whatever they have been asking of him (if he hadn’t been, they would have been required to include him).

Many fans were optimistic about Loudermilk entering his second year after showing promise as a rookie, some even seeing in him some starter potential. With a deep defensive line, however, he will first have to take away somebody’s job, and perhaps a veteran, like Chris Wormley or Tyson Alualu, would be the most likely target, unless they want to sit rookie third-round pick DeMarvin Leal, who has played about 50 snaps in the first three games.