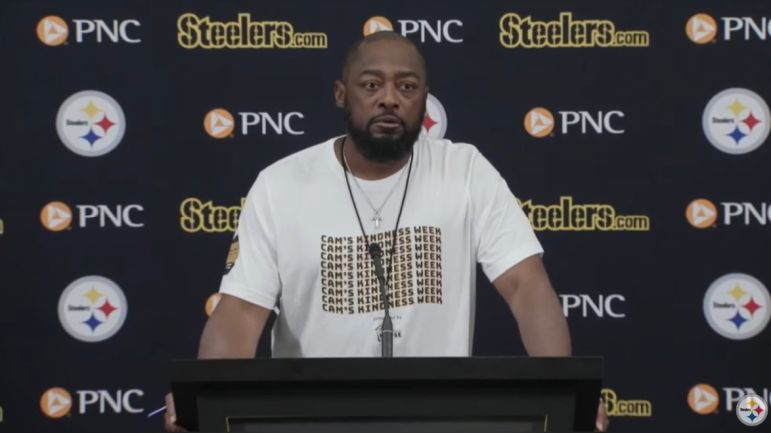 On Tuesday, HC Mike Tomlin spoke to the media in his weekly press conference where he talked about the events of last Thursday’s loss on the road to the New England Patriots and previewed the team’s upcoming Week 4 matchup against the New York Jets.

Tomlin was asked about the topic of going up-tempo on offense after the Steelers had success with the no huddle early on in the game against the Browns last Thursday and if the team will look to incorporate it more into the game plan moving forward.

“Pace is a component of what we do each and every week,” Tomlin said to the media Tuesday which aired live from the team’s YouTube channel. It’s not whether or not we use pace, it’s how we use it, in what situations, and in what manner. And so, that’s just going to be a function of what it is that we do each and every week. It’s a function of our offense.

Pittsburgh put together back-to-back 75-yard drives in the first half which both resulted in TDs Thursday night against Cleveland. On these drives, Pittsburgh ran eight plays in the no huddle offense, helping the offense stay on-schedule whilst making it difficult for the opposing defense to substitute and make the correct checks in time to be in-position for the next play. This allowed Pittsburgh to stay ahead of the chains from seemingly the first time all season long, picking up chunk plays in the passing game as well as on the ground as the offense moved down the field and put the ball into the end zone.

Tomlin mentioned above that pace is a component of the offensive game plan every week, yet Pittsburgh appears to drift away from using tempo throughout the game for various reasons. Whether it be to slow things down and try and chew up clock or give the defense a chance to rest on the sidelines, Pittsburgh would go away from the no huddle offense like they did Thursday night in Cleveland. However, that decision backfired as the offense sputtered out that the defense couldn’t get off the field against Cleveland’s dynamic rushing attack, losing the time of possession game in the second half as the offense had three consecutive three-and-outs in the second half.

Thus, while tempo is a component of what the offense does, it would likely be wise if Tomlin, Mat Canada, and the rest of the coaching staff incorporated more tempo in the game plan moving forward as that is where a struggling offense has had the most success to-date. If the goal is to score points, Pittsburgh has done that best in the no huddle not only this season, but in years past with Ben Roethlisberger. Therefore, if the Steelers want to see change in terms of consistency and execution on the offensive side of the football, more tempo could very well be the answer.