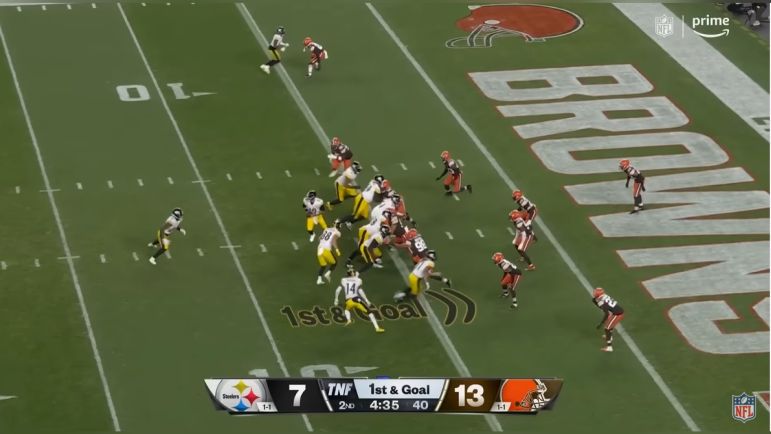 It seems like the only time the Pittsburgh Steelers’ offense has shown signs of life this season have come with increased pace. Using a tempo’d no-huddle/muddle huddle offense resulted in a scoring drive against the New England Patriots and a first half touchdown versus the Cleveland Browns last Thursday night. But Pittsburgh didn’t go back to it in the second half of the Browns’ loss for reasons center Mason Cole can’t exactly explain. Speaking to reporters Monday, Cole explained the benefit of tempo.

“Tempo is always good,” Cole said via 93.7 The Fan’s Josh Rowntree’s tweet. “I’ve played in different offenses when tempo can be a serious weapon…I think we used tempo well in the first half of this past game. For whatever reason, we didn’t use it as much or it wasn’t working as much. I think tempo is good.”

#Steelers center Mason Cole on offense using tempo well in Cleveland: "For whatever reason, in the second half, we didn't use it as much." @937theFan pic.twitter.com/pik96Z3nH1

Pittsburgh put up 14 points in the first half of their Week 3 game in part thanks to the use of its no-huddle offense. On their first scoring drives, seven plays for 75 yards, they used no-huddle on four of those snaps. On the following drive, ten plays for 75 yards, they used it three times, including two of the final three plays before punching the ball into the end zone. Their passing game was more effective, and their run game was at the best it’s been all season.

Comparing that to the second half before the Steelers’ final drive with time running out, they used no-huddle on five snaps. With fewer overall snaps, the no-huddle percentage was actually similar. The problem, of course, was effectiveness. No-huddle works when an offense is efficient, building up that snowball to get it rolling downhill. With more incompletions and fewer on-schedule runs, the Steelers’ no-huddle weapon didn’t become a weapon and the offense netted only a field goal in the final 30 minutes of play. Increasing tempo is also tougher on the road with the element of crowd-noise, though Pittsburgh found a way to make it work in the first half of their Week 3 loss.

While Matt Canada has said he’s open to using more tempo, it seems to be the only way the Steelers have at moving the football. Tempo is useful and like dessert, isn’t something you can consume all the time, but it’s concerning that Pittsburgh only moves the ball when they pick up the pace. The good news is they’ll be at home this weekend against the Jets when no-huddle can potentially be more effective and constant.