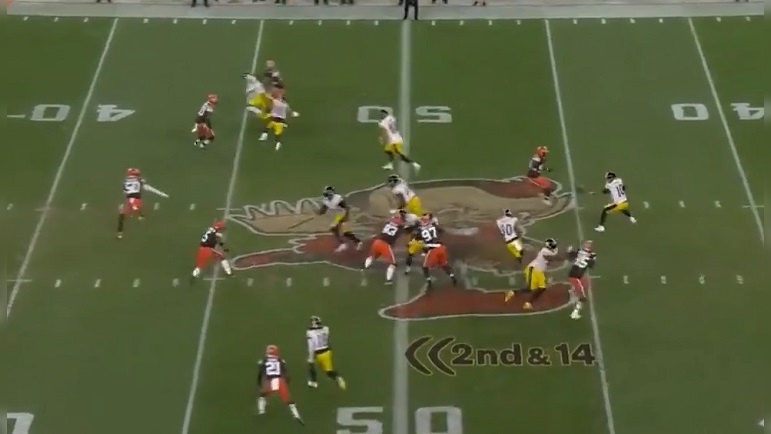 The Pittsburgh Steelers’ offense has been searching high and low (though not over the middle) for splash plays. Thursday night against the Cleveland Browns, they thought they got one. A well-executed shovel pass to Jaylen Warren for a solid 30 yard pickup, a chance to extend the team’s 14-13 lead.

But the play was called back on an ineligible downfield penalty on RT Chukwuma Okorafor, wiping the play out and eventually leading to a Steelers’ punt. Asked about the call during his Tuesday press conference, Tomlin accepted the verdict but with a hint of doubt.

“Evidently, yes. Evidently,” Tomlin said with a laugh when asked if Okorafor was illegally downfield.

The answer of a man who doesn’t want to get fined by the league coupled with the hint of “I disagree with the call.” Here’s a look at the play. It’s mostly garnered attention for Okorafor’s finishing block on injured LB Anthony Walker, a play the Browns have taken issue with, and one Tomlin said he hadn’t examined to comment on. But to the core of the play, was Okorafor illegally downfield?

Here is the penalty on Chuks Okorafor for Ineligible Downfield Pass against Browns that Mike Tomlin seemingly doesn't understand why it was called as such.

In determining an answers, the NFL rulebook is a bit complicated with plenty of clauses and points of clarification. Here’s what the rules outline:

Item 2a is the most relevant part. Though the refs never applied an official explanation on the call, they appear to be ruling Okorafor as more than one yard downfield without contacting an opponent. As you’ll see below, with the line of scrimmage the 50, as Trubisky releases the ball, Okorafor appears to be at about the 48.5 yard line. 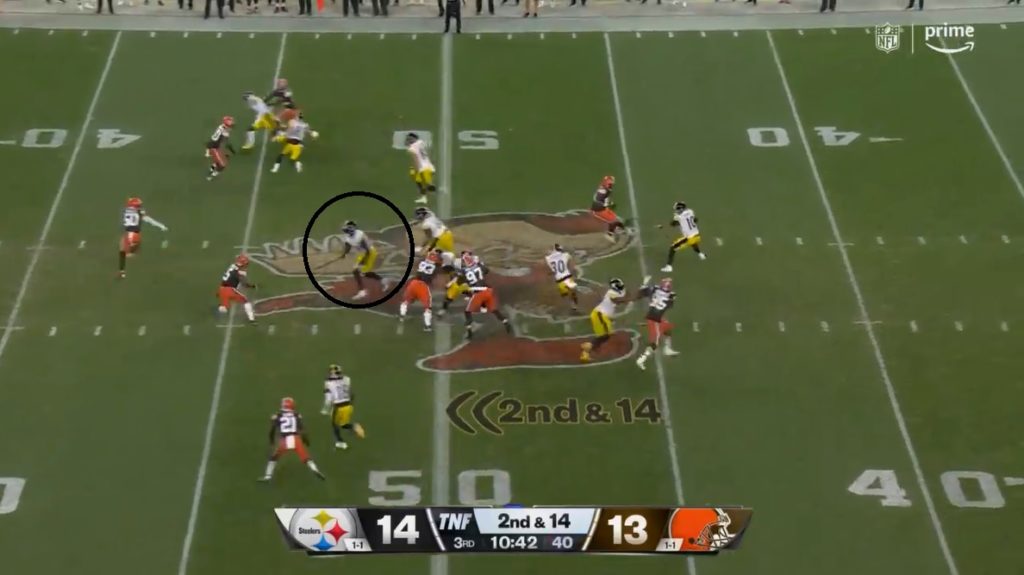 The rule states Okorafor’s entire body must be more than one yard downfield and his back right foot is past the 49 yard line. Meaning, to the letter of the law, Okorafor is illegally downfield. It’s close but it appears to be the right call. One NFL assistant coach told me the league is calling these penalties a lot more this year and unfortunately, this one wiped out a big gainer.

This was one of two big missed chances in the third quarter of the loss. An incompletion on a well-thrown deep ball to Diontae Johnson down the left sideline on 3rd and 3 later in the game also proved costly.

While Tomlin clearly isn’t happy with the call, for a team that runs as much shovel-option as the Steelers, they’ll have to tweak how they block it up the rest of the year to avoid a big catch-and-run being negated again.