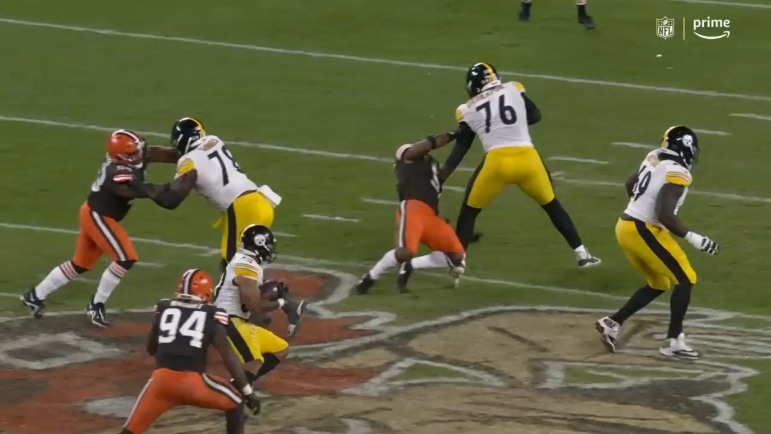 Pittsburgh Steelers offensive tackle Chukwuma Okorafor’s block on Cleveland Brown linebacker Anthony Walker Jr. that ended his season on Thursday night has not been well-received in the Cleveland locker room. Okorafor, who knocked Walker to the ground with his left arm and then jumped on him after the play, was flagged for being an ineligible receiver downfield. Myles Garrett spoke about the play on Monday.

Garrett, who knows a thing or two about dirty plays, is obviously just defending his teammate here. But to say “you don’t jump on a guy” is just laughable given that’s exactly what offensive lineman are taught to do. You don’t want a guy getting up and making a play on a ball carrier, and to prevent that from happening, you’re usually taught to lay on the guy to make sure he can’t easily get up.

Now, the fact Walker Jr. wasn’t moving adds another element to the play, but that’s something we can see with the benefit of slow motion and instant replay. In the heat of the moment, Okorafor was probably just doing what he was taught to do. While it didn’t look good, I highly doubt that Okorafor had any malicious intent.

For what it’s worth, given that Walker’s injury was a torn quad, it doesn’t look like anything Okorafor did contributed to Walker getting hurt. In fact, it appears he suffered the injury before any contact was made by Okorafor. Garrett’s comments only make sense in the lens saw his teammate go down for the year as a result of the play, and the optics of it don’t look great on replay.

Wyatt Teller claimed it appeared that Okorafor was intentionally trying to hurt Walker.

“I’ve had late hits, inadvertent chop blocks or something crazy like that. But I don’t want to hurt them. There’s nasty stuff and then there’s inadvertent stuff and it seemed like that wasn’t exactly inadvertent. It seemed like he wanted to cause more pain, which is weird. But the NFL will handle that,” Teller said.

When you watch the replay, I don’t necessarily understand how you can get to that conclusion, either. Okorafor never stops moving on the play. He knocks Walker down, is a step ahead of him, plants and jumps on him to prevent him from getting up. It wasn’t as if he stood over Walker for a few seconds and decided to pile drive into him.

Ultimately, Okorafor made a play in real time that looks a lot worse when you go and watch it back. If he recognized that Walker was down and hurt and jumped on him, then everyone should be upset. But in real-time, I just don’t think Okorafor knew he was hurt and he was just doing something that linemen are taught to do. Maybe he could’ve just held him down instead of jumping on him the way he did, but that wasn’t the case. When a lineman brings their opponent to the ground, they’re taught to keep them down, and Okorafor chose to jump on him to do so. It sucks that Walker got hurt on the play, and he’s a great linebacker who the Browns will sorely miss. But I really don’t think you can’t pin the injury on anything Okorafor did.

The league will determine if Okorafor deserves any further punishment. All plays are reviewed by the league to see if any fines are warranted, and Okorafor will find out later this week if the league agrees with Cleveland and feels what he did was excessive.